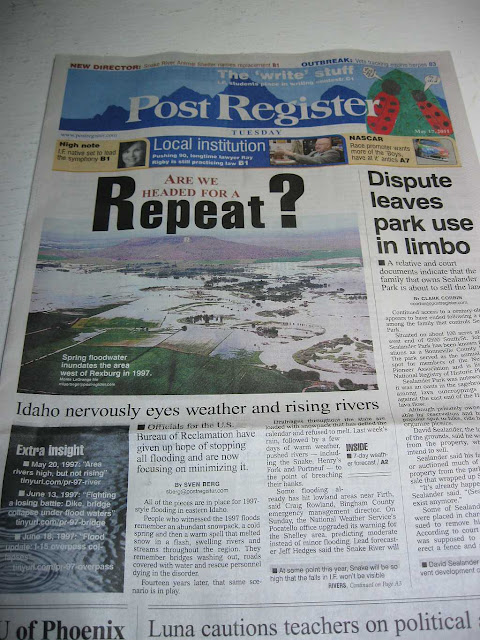 Back in the mid-60's (the years, not the temperatures) I was sitting in some tired old classroom in an ancient 19th century building on the Purdue campus listening to some bespectacled professor try to teach us about newspaper headlines.  The topic of the class that day was how the size of the type font should always relate to the relative importance of the story, especially with with any banner headlines for the lead story on the front page.  The prof droned on and on in a way that only tired old profs can do.  But he raised his voice and his eyebrows when it came to discussion of truly important lead stories on the front page.  That's when he started discussing "The Second Coming."   He said that if The Son of God were ever to set foot on earth a second time, you were justified in using the largest type font that you could possibly find.  Back in those days, most newspapers were still setting their stories in hot lead cast using a Linotype machine.  The prof reached into this tired, worn briefcase and huffed and puffed and pulled out this HUGE freaking piece of heavy lead that he had somehow scammed from a newspaper's layout the day after WWII ended.  (History buffs will recall VE & VJ Days were put on the same pedestal as The Second Coming.)  All us rubes in that class were duly impressed and looked at each other with knowing nods and appropriately amazed facial expressions.  Well, obviously, I never forgot Parable of The Second Coming.

Lo and behold, we woke up this morning to a classic Second Coming headline in our local daily newspaper.  It's quite an apt us of what is otherwise known as a "Screaming Headline," don't you think?  Afterall, the headline is discussing a potential second coming of an honest-to-gosh real flood the last likes of which were seen in these parts in 1997.  Frankly, I dearly love it when a headline actually, truly, really DOES match the magnitude of the story below.  Kudos to the P-R's headline writers.  (We're wondering, of course, if any of them ever heard the Parable of The Second Coming.)  But, whatever, we're digressing and maybe even regressing, too.  Get to the point, John, darn it.

OK, the point is something we've discussed a couple of times right smack dab here on this blog.  But first, let's take a look at the meatiest, juiciest quote in the story printed in today paper.  Here it is in all its glory:

"At some point this year, Clements said, the Snake will be so high that it will make the falls in Idaho Falls disappear from view. "

WHOA!  Say what?  Now that's a fearless prediction if I ever saw one. We can hardly wait to see if that prognostication comes true.

Our two cents worth on this situation first appeared in an April 27 blog post when we said, "The Bureau of Reclamation is paranoid about the snowpack."  The head BuRec guys was quoted in today's paper as saying:

"Either way, it may be awhile before people such as Rowland, Clements and Beus get a good night's sleep.  'It'll be a wild ride,' Beus said. "


In our May 8th blog post we said "There's going to be a lot of nail-biting and hand-wringing going on during the weeks ahead--of that, you can be certain.  Stay tightly tuned to this saga, folks, no matter how it turns out, it's going to be one for the history books."  You can click here to read that blog post.

If you are interested in reading the full article from today's Post-Register, we printed it to PDF and put it in our Google Docs.  You can click here to read it.  Remember, this article is Copyright 2011 by The Post Register and is used here with permission.

We will go down and take some more photos of The Falls today.

Many Cheers!  jp
Posted by John Parsons at 8:13 AM