Now for the long version.

Everyone knows we've been spending way too much time covering Idaho forest fires. It has been fun and our coverage has received some kind compliments.

A few days ago there was a story making the rounds that the Forest Service had run out of money to fight this year's fires. Boy, oh, boy, did that bring back memories. Actually, it brought back this long story, too, a story we're going to tell right here and now.

First, just so you can have some context for the story we're about to tell, here is the link:

OK, now that you have read the backgrounder, here's the story.  This is a long story.  If you dislike long stories, stop now.

Back in the summer of 2001 we volunteered 4.5 months for the Dixie National Forest in Southern Utah.  That's how Forest Service volunteering got into our blood.  We were very smitten with "volunteering for Smokey," as we called it.  We had been invited back to volunteer in the same capacity during the summer of 2002 but simply couldn't wait that long to keep volunteering.

We wanted to volunteer again as soon as possible.  Naturally, we spent a LOT of time on the internet looking for feasible ways to volunteer.  On New Year's Day evening of 2002, we stumbled into the National Visitor Usage Monitoring (NVUM) Program and our lives would never be the same again.

We sent an email New Year's Day 2002 to the Volunteer Coordinator Suska Kocis and offered to be "Secret Shoppers."  She immediately took us up on our offer and we became Life Long Friends.  Suska essentially changed our lives and we will be forever indebted to her.  (THANK YOU, Suska!)

Since the study was so carefully designed there had to be some "quality control" on the data gathering interview process.  That's where we as Secret Shoppers came in.  We would pose as tourists or Forest users or whatever and go through exit interviews.  Of course, we knew precisely how the interview was supposed to be conducted.  We would make notes on which parts of the process were not correctly followed and then report back to Suska Kocis.  She, in turn, would use our reports to create "teachable moments" for Forest and contractor personnel conducting the interviews.

The thinking was that reports received from reliable, credible Secret Shoppers could improve the data gathering process and therefore improve the integrity of the data itself.

We began serving as Secret Shoppers right away in January 2002.  Our very first interview was at the Barnhardt Trailhead in the Tonto National Forest not far from Rye Creek in the Upper Tonto Basin where the Mazatzal Mountains form the western horizon.

Right away, we were hooked.  We were born to be Secret Shoppers and we totally loved every aspect of the process.  Suska loved our work, too, so it was a great match and we three thoroughly enjoyed ourselves.  That's just one of the many reasons we remain Life Long Friends today.

Well, one thing led to another and we canned the idea of returning to The Dixie National Forest and allowed ourselves to be fully consumed by the NVUM process.  Once Suska knew our Road Trip planning skills, she simply provided us with the XLS spreadsheets of all the various National Forest's NVUM interview schedule and essentially said, "See what kind of a trip you can come up with."

We would spend hours and hours pouring over the spreadsheets and various online and hard copy maps attempting to make sense of how to logically string a giant, long Road Trip together.  It was a real challenge because of various factors unique to the NVUM process.

Finally, we had our 2002 Road Trip all planned out and approved by Suska.  We'd be going up through Southern Utah, across Nevada and through various Southern California National Forests and then up through some Central California Forests before heading into Northern California Forest; Southern Oregon Forests; Coastal Oregon Forests and then back through the Heart of Oregon Forests.  Then the Road Trip plan took us out through Idaho, Wyoming and South Dakota Forests before finally bringing us back through Colorado and New Mexico National Forests to our Arizona home.  The whole trip was going to take almost 3 months.

Suffice to say, we were really looking forward to such a long Road Trip, especially since our gas costs were covered.

Everything went well through Nevada and California.  We even got to meet Suska in person in Northern California.  The Oregon leg was great.  We worked out way up the coastal Forests and then came back through the Heart of Oregon Forests as planned.  We'd been on the road maybe 5-6 weeks when we washed ashore in Bend, Oregon, to file our pending reports with Suska.

I will never forget the phone call.  We were accustomed to calling Suska and going over the details of various Secret Shopper reports.  We called from a dinky pay phone in some dinky state park near Bend.  It wasn't particularly a very nice pay phone because it didn't have a very good place to lean and use a pencil and paper at the same time.

Suska answered the phone and I said, "Hi, Sue, this is John calling from Bend, Oregon."  There was silence on the other end.  Right away, I knew something was very wrong.  Finally, Suska spoke with a tone of voice I had never heard.  She said, "John, I have some very bad news for you.  The Forest Service Fire Fighting budget has been exhausted.  The Chief notified everyone all other projects must stop and all money must be diverted to the fire fighting budget.  Your trip is over.  We do not have money to pay your gas mileage to continue the trip."

Opps.  I will never forget the faint-headed feeling that day when I learned the "fire guys" took away everybody else's budget so they could fight fires.

Well, ya know, change is the only constant of life and ya just gotta buck up and deal with it.  I hung up the phone after filing our reports and passed the news to Susun.  Her face was ashen.  We hugged and both said almost in unison, "What are we going to do now?"

Bend, Oregon, is a nice place but it's not our kinda place. Basically Bend is kind of "out there."   For some people that's a good thing.  For us?  Not so much.  We went back to our camp confused and in mental disarray.  We knew not how to cope with such news.  We were cast adrift without a plan.

As Type A people who have to always have a "Plan," having NO Plan is not a good thing.  It is a very disconcerting state-of-mind.

Well, Happy Hour has a way of turning darkness into light.  And so it was that we hatched a plan to return to a sweet little, folksy private campground on the Rogue River not far outside of Gold Beach in Oregon's South Coast Curry County.  As we drove the Crater Lake route to get back to the South Coast, we could see the pyrocumulus clouds of what became known as The Biscuit Fire rising over the Coast Range.

We wound up spending two months happily encamped at the Huntley RV Park there.  It turned into one of the most delightful summers we have ever enjoyed.  Describing that fabulous summer would take several more stories, each longer than this one.  Suffice to say we also got up close and personal with "all things forest fire fighting."

That was back in the days when strangers could simply walk right into fire camp and mill around.  We even heard of people who put on NOMEX just so they could get into the chow line and eat well!  Practically all of Gold Beach businesses shut down and went to work for fire camp.  We almost did, too, but that's another story.

We finally left The Rogue well into September and surfed ashore in Red Bluff, California.  We were thinking of spending the winter there volunteering for a California State Park when we got another unsettling call.  The voice simply said, "Your house has been flooded."

You'd be surprised how quickly one can drive from Red Bluff, California, to Rimrock, Arizona.  We left Red Bluff at 5 pm and made it to Rimrock by 9 am the next morning.  Not too shabby.

Our house was too flooded to occupy and needed to dry out.  Suska came to the rescue when the new federal fiscal year dawned October 1st and sent us on a 6,600 miles Road Trip that took us clear back to a bunch of Eastern US Forests and then down through all those Southern States and then across the widest Heart of Texas before we finally got back home after a month out on the highway being Secret Shoppers.

We eventually volunteered 5.5 years for Suska and visited roughly 50 National Forests in about 25 States as Secret Shopper.

If not for the Forest Service running out of fire fighting funds back in 2002, there's not doubt in either of our minds that our lives would have ever turned out the way they did.  We can trace every subsequent decision of our lives back to being stranded in Oregon because of a fire fighting budget deficit.

We write this story tonight because, ironically, we wouldn't be here right now in Idaho in 2013 writing about forest fires if not for being stranded in Oregon because of that whole fire fighting budget gig.  It's kind of a karma circle, a karma cycle or "what goes around comes around."

We connected the dots today to way back in 2002 and we had quite a chuckle out of it all.  Now when we read that Washington Post article about this year's fire fighting budget deficit and the Forest Service having to call in $600-million from other worthy programs, we wonder whose lives it is affecting and we wonder if they will look back 11 years from now and say, "We're SO DANGED GLAD THAT HAPPENED!"

Thanks for reading!  May Cheers, John Parsons.
Posted by John Parsons at 6:42 PM No comments:

We aren't posting on this blog until later in the year.  Too much going on.  Meanwhile we've put up 100's of posts on Facebook.  We know many of our blog readers don't like Facebook.  However, Facebook is so much easier for us to use than the blog.  We will get back to more frequent blogging when we're back down on Ol' Arizonie.
Posted by John Parsons at 11:00 AM No comments: 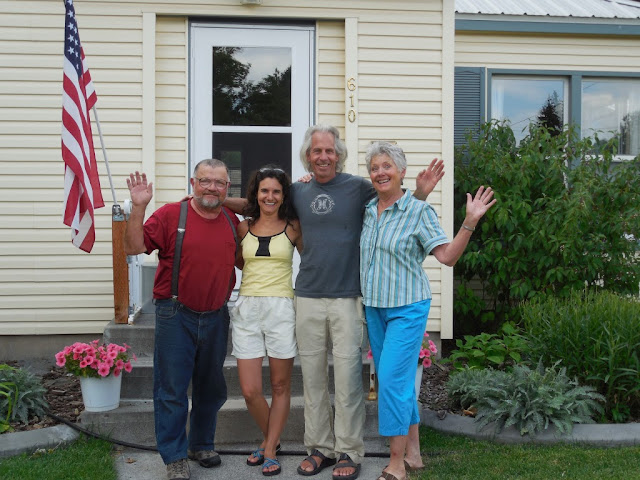 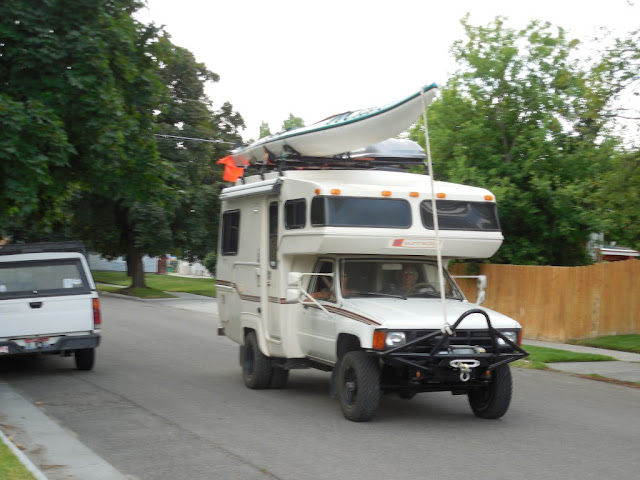 Posted by John Parsons at 8:31 PM No comments: