Peaks to Pits in 24 hours 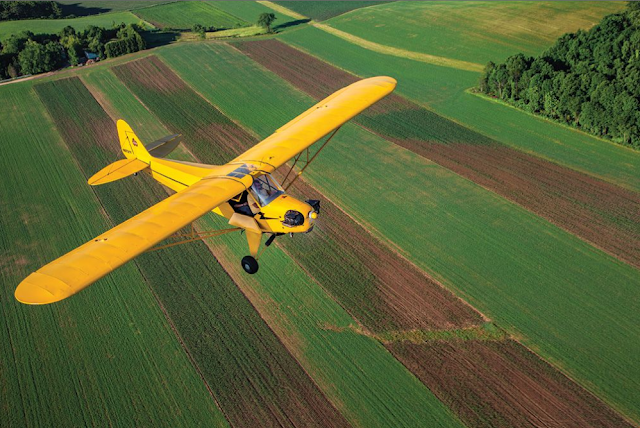 I soloed a Piper Cub at noon on my 16th birthday November 21, 1963, and was riding the very tippy top peaks of youthful exhilaration, excitement and exuberation.

A mere twenty four hours later, I was in the total pits of youthful depression, despair and dreadful anxiety following the assassination of President John F. Kennedy at 12:30 PM, November 22, 1963.

The tragedy hit everyone young and old with a devastating emotional grief which took a very long time to overcome.  Although I didn't realize it at the time, Kennedy's death put an end to my aspirations to be a pilot.

Let's go back and begin at the beginning, shall we?

As most of you know, my Dad was a top turret gunfighter on a B-17 in World War Two.  He was shot down in his 13th mission and endured the brutality of Nazi prison camps for the remainder of the conflict. Dad had been fascinated  with aircraft every since he took a ride in a Ford Tri Motor as a youngster of perhaps 8 years of age.

After I came along in the late '40's, Dad dragged me around to view anything that would fly and a lot of stuff that wouldn't.  Most of my Father-Son dialogues with Dad involved some sort of  "plane talk."
Of course, I wanted to Honor By Father by becoming a pilot as soon as possible.  It was something I dreamed of from a very early age.

Mom and Dad insisted I couldn't begin flight training until my 15th year and they agreed to arrange for me to solo fly on my 16th birthday--the earliest legal age allowed by the FAA at that time. 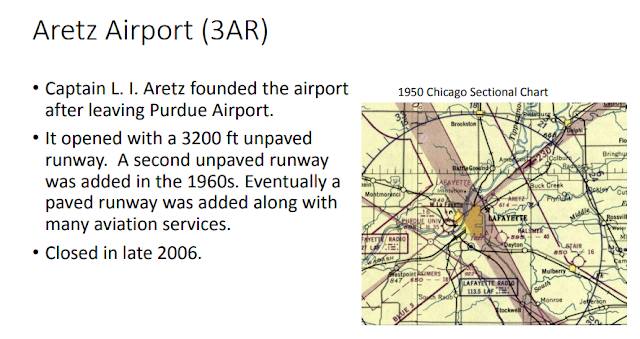 All of  my flight instruction took place at a Mom and Pop place called Aretz Airport.  A famous World War One pilot founded the airport in 1930.  By the early '60's, the place was about as bucolic an airport as you could possibly imagine.  Totally Down Home in every way.  It operated for over 75 years before closing down in 2006.

I eagerly started ground and air lessons in the summer of 1963 and soaked up every word and action of my instructors.  A couple of them said I was the best student they ever had.  One of my instructors was a combat fighter veteran from World War Two.  He seemed ancient me as a 15 year old but was probably only in his 40's. He loved to give me a flying lesson on Saturdays in September, October and early November of '63.

Well, The Purdue University Boilermaker football team had numerous home football games at Ross-Ade  Stadium in West Lafayette, Indiana.  Back then it was tradition to release bazillions of helium-filled balloons just prior to the opening kick off.  My instructor timed my flight lesson for those balloons.  He'd be sure to be circling the stadium waiting for those balloons to rise.  And then he'd pounce.  "HERE THEY COME," he'd call out in a near shout, "LET'S GO GET 'EM!"  And then the aerial acrobatics began.  After he popped a few with the propeller, it would be my turn.  There was no such thing as straight and level flying when we attacked the balloons.  That's really when I learned the pure, abject Joy Of Flying, banking, diving and tight circling to get at those balloons.  Gosh, it was so much fun.

Most of my flight time was in a Piper Cub.  However, on Saturdays we took out a more powerful aircraft that was better suited to chase and pop balloons.

Mom and Dad made a "deal" with me.  They said they would pay for my flight instruction until the day I soloed.  After that, I would have to pay.

I was so excited to solo on my 16th birthday.  I could hardly wait and began counting down the days like people did before Christmas back then.  Mom wrangled a way to get me out of Central Catholic High School that day, even though the stern Principal priest was none to pleased about it.  Several of my parents Friends and Family came out to watch me solo.

I remember the flight instruction leaning into the small Piper Cub cockpit and looking be square in the eyes as he said,  "Just bring it back in one piece, OK, kid?" 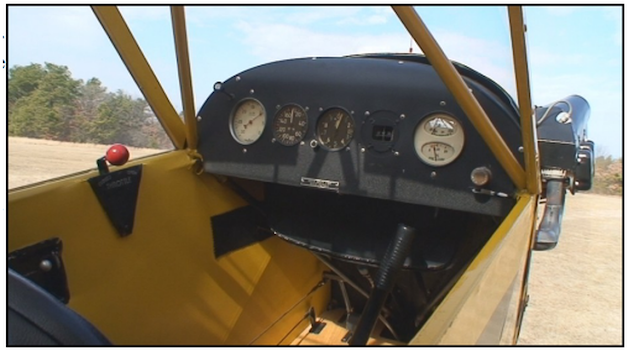 You can imagine how fast my heart was racing as I idled up the little engine that could and taxied to the end of the runway.  I went through all of the obligatory checks and shoved the sided panel throttle to the maximum.  You can see the throttle on the left with the red knob. It seemed like that little place practically leaped into the sky while I nervously gripped the stick.  I had been strongly admonished not to fly out of sight of the runways so I gained altitude and flew a lazy circle around the airport.  Piper Cubs are slow as molasses so even just one circle around the airport took awhile.  Bu then I figured I better set up for the approach and land.  I was terrified of landing the aircraft by myself.  It's one thing to get it into the air but it's quite another to get it safely back on the ground.

I had landed the Cub many a time with my flight instructor and I always felt comfortable, mainly because I knew if I did something wrong the instructor would save my anatomy.  But this time was different.  There was no one else in the aircraft to save my anatomy but me.

Oh, how my heart raced as I began the final, eve3r so gently bringing that sweet little bird back down to earth.  Since the Piper Cub is what is known as a "tail dragger," the trick is to set it softly down on the two front wheels and then reduce the throttle until the rear wheel settles onto the runway.

Luckily, I did everything just right and had what the instructor called "a picture perfect landing."  When I climbed out of the cramped cockpit I felt like a celebrity.  My Mom was crying, My Dad was slapping me on the back and their Friends and Family were cheering and clapping.  Gosh, what a moment.

My folks were so overcome with joy they decided a celebration was in order so we drove all the way down to Attica, Indiana, where the region's most renowned steak house was located.  Mom and Dad treated me to a ginormous T-bone steak with all the trimmings that night.  We three talked incessantly of my bright future as a pilot.  It was a truly joyous occasion, the best of my whole life up to that time.

I went to sleep that night with stars in my dreams.  The next day at school before classes started, I was besieged with questions and comments and snarky remarks from my Friends and classmates.

And then I was sitting in Mister Eberle's class when the News came. I can remember it as clearly today as if I was sitting there right now.  I've never felt such a profound shock, not even with 911.  Many of the girls burst into tears.  One girl screamed and promptly fainted.  Luckily, she fell forward onto her desk and  not onto the floor.  Mister Eberle and a couple of Nuns attended to the girl while the rest of us were more or less cast adrift.  At that age, we didn't really even understand how to deal with such a shock and there were no counselors to help us.  It was gut wrenching an terrible and there was really no where to turn because every one else as badly or worse than I did.

I think everyone's life changed in some way that day.  I went into a funky sort of depression that lasted a long time.  I didn't want to talk or socialize and could barely even eat.  Any thoughts of flying any time soon were totally out of the question.  It was weeks before the topic of flying came up in Family conversation.  I just shook my head.  I didn't want any part of it.

Somehow during that time my flight log book disappeared from Aretz Airport's office.  When I finally did go back out to fly my records were gone, too.  Meanwhile I got a part time job as a bus boy at Holiday Inn for 50 cents an hour.,  Trust me, you can't buy flying lessons on 50 cents an hour.  Soon, all the joy of that Solo Flying on my 16th birthday faded into oblivion.

Life went on and I never took up flying again.

Posted by John Parsons at 8:33 AM No comments:

Currently, my personal blog is dormant but I am hoping to start posting again today or tomorrow.

Posted by John Parsons at 4:47 PM No comments: