Hoodwinked...! A Life's Myth exposed...!
After well over 60 years of knowing about, playing and honoring the legendary Game of Monopoly, I learn today everything I thought I knew is lies, lies and damned lies!
Charles Darrow did not invent Monopoly. He stole it from Lizzie Magie. And then to add insult to injury, he changed the soul of the game! I have to tell yam Life's Myths die hard and learning all of this today has been a genuine revelation. But I guess I shouldn't be surprised. The whole story is after all SO monopolistic! 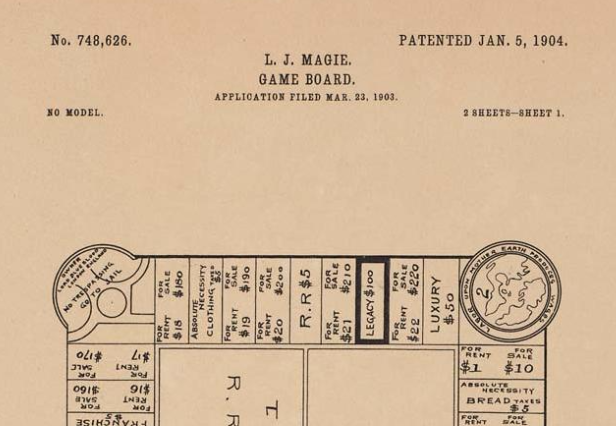 This is the original patent for what would become known as Monopoly. It all started with thisTweet from the US National Archives for #ArchivesGameNight
https://twitter.com/USNatArchives/status/916295783565099013

Here is Lizzie Magie's signature on the patent paper. This NPS story brought my whole Monopoly Myth crashing down around my Get Out Of Jail Free cards:
http://www.npr.org/2015/03/03/382662772/ever-cheat-at-monopoly-so-did-its-creator-he-stole-the-idea-from-a-woman Below is the abstract of the book written about the whole story.

The Monopolists reveals the unknown story of how Monopoly came into existence, the reinvention of its history by Parker Brothers and multiple media outlets, the lost female originator of the game, and one man's lifelong obsession to tell the true story about the game's questionable origins. Most think it was invented by an unemployed Pennsylvanian who sold his game to Parker Brothers during the Great Depression in 1935 and lived happily--and richly--ever after. That story, however, is not exactly true. Ralph Anspach, a professor fighting to sell his Anti-Monopoly board game decades later, unearthed the real story, which traces back to Abraham Lincoln, the Quakers, and a forgotten feminist named Lizzie Magie who invented her nearly identical Landlord's Game more than thirty years before Parker Brothers sold their version of Monopoly. Her game--underpinned by morals that were the exact opposite of what Monopoly represents today--was embraced by a constellation of left-wingers from the Progressive Era through the Great Depression, including members of Franklin Roosevelt's famed Brain Trust. A fascinating social history of corporate greed that illuminates the cutthroat nature of American business over the last century, The Monopolists reads like the best detective fiction, told through Monopoly's real-life winners and losers.

It is available on Amazon here: https://www.amazon.com/Monopolists-Obsession-Scandal-Behind-Favorite/dp/1608199630 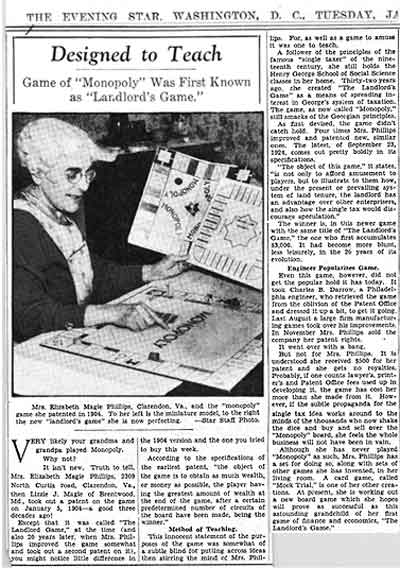 Ah, well, maybe it's better to let sleeping dogs lie.
After all, Monopoly has a Life of its own these days. 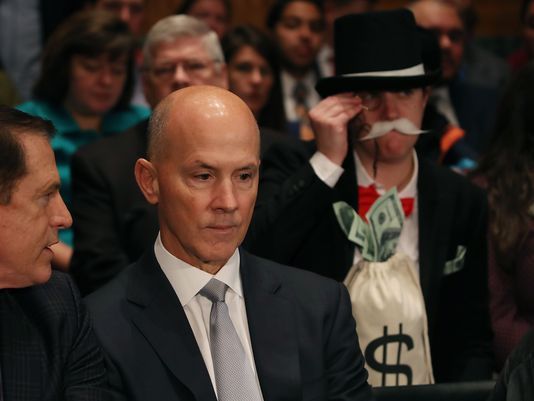 https://www.usatoday.com/story/money/nation-now/2017/10/04/someone-dressed-like-monopoly-guy-photobombs-senates-equifax-hearing/732170001/
Posted by John Parsons at 9:18 AM No comments:

Sooner or later, ya gotta face reality...
"The long-term impacts on the guest experience and visitation in Waterton are going to be horrific, no question about it. The backcountry is burned to a crisp.

It will be about two decades before the trees in Waterton are taller than people walking through the forest. It could take a century for trees to be full-size again."
It really hurts to look at Alberta's Waterton Lakes National Park photos. It makes me nauseous. But sooner or later, ya gotta face reality and deal with it: the incredibly beautiful area around the Waterton Townsite has been destroyed and will never look the same again in my lifetime. We are so grateful that we went there this August before it was destroyed. Oh, how we would be kicking ourselves if we had let fire smoke deter us. Yes, it was a little smokey (well, a LOT smokey) but at least the innate beauty of the area shined through everywhere we looked. We had one final chance to see the place before it flashed to black. The Waterton Townsite itself was saved from the fire but everything around the Township was burned either by the advancing fire front or by the back burns set to save the village. It's hard to imagine, hard to swallow and hard to face reality. But it's true. Source for quoted narrative above: http://rdnewsnow.com/article/553786/waterton-lakes-national-park-will-take-decades-recover-wildfire Source of the photos: https://www.pc.gc.ca/en/pn-np/ab/waterton/securite-safety/feu-fire-kenow/feu-fire-images-05 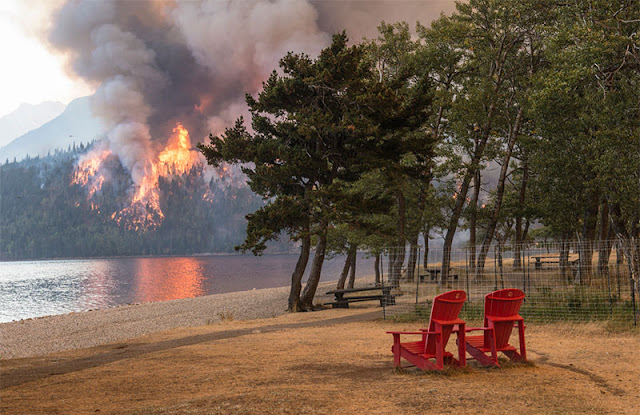 We visited this exact spot during our stay in Waterton.
Will try to find the photo we took of those two iconic chairs. 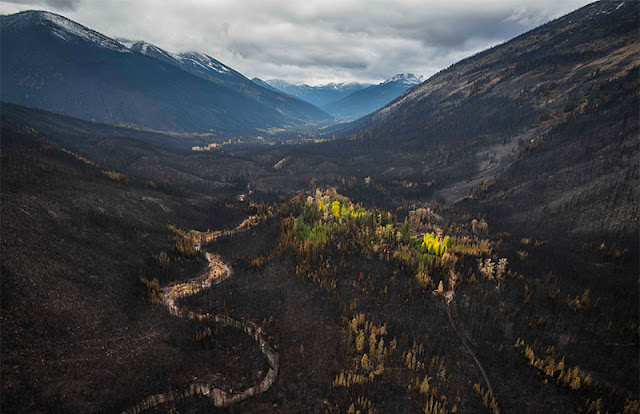 We drove up this once lush Valley to visit a pristine glacial lake. 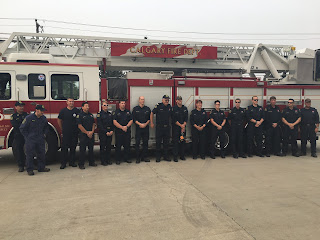 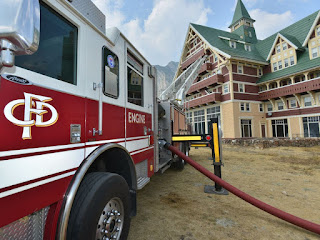 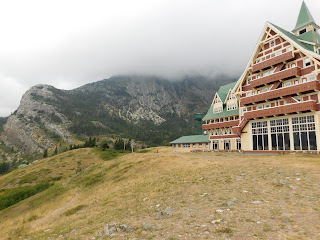 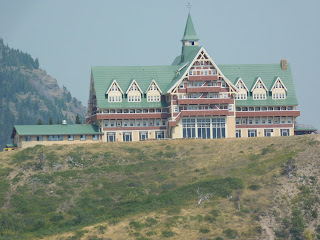 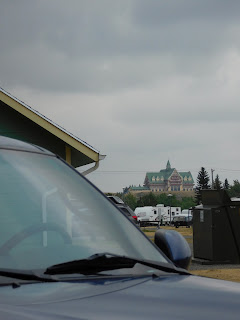 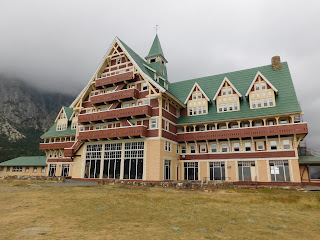 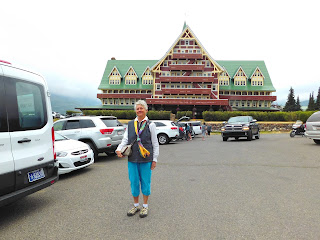 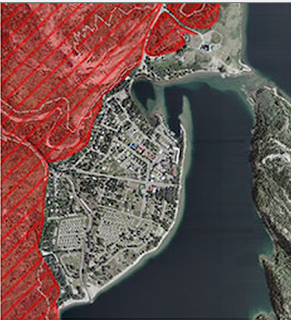 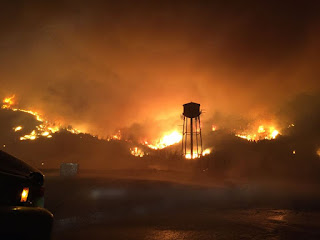 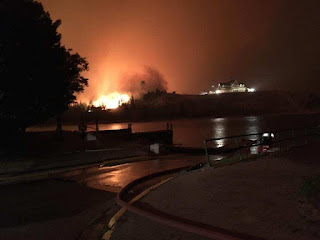 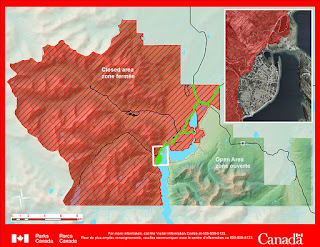 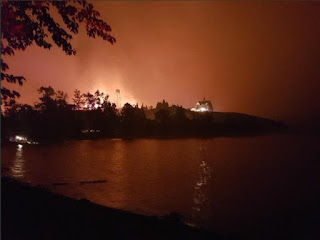 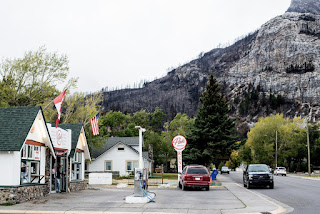 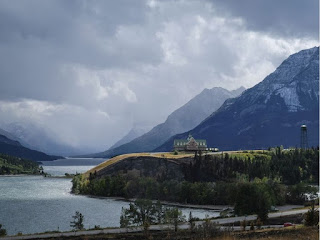 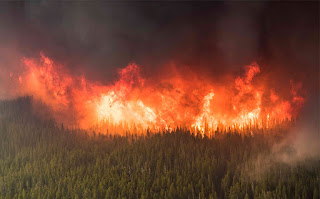 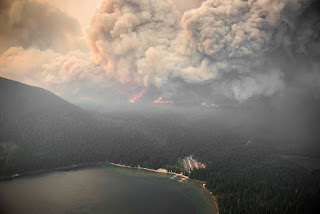 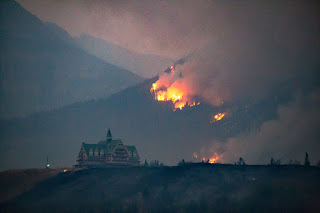 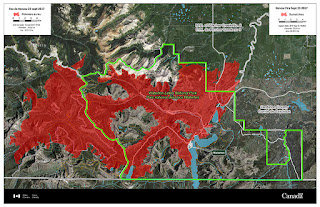 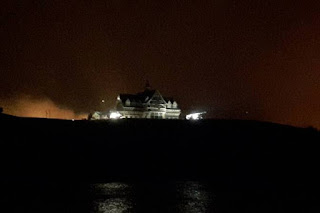 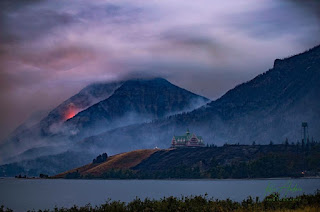 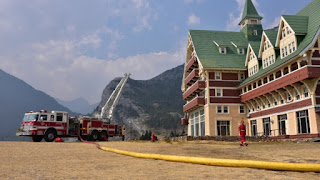 The team started work Monday morning at 8 a.m. MT and continued hard for the next 31 hours. From 9 p.m. Monday until 5 a.m. the next morning, there wasn't time to take a break as the fired rolled up within about a hundred metres of the hotel.  "The embers were rolling up on the porch of the hotel," Primrose said. "We did get showered with embers, right up to the hotel." With flames encroaching, a rain of embers came all the way to the doorstep of the historic Prince of Wales Hotel.  "It was the most intense fire I've ever been involved with, and I was never at that point where I thought we would lose it," said Calgary fire district Chief Jeff Primrose on Thursday. "Not even for a second." A team of about 50 Calgary firefighters, in rotating groups, was sent to the national park to protect structural assets in the hamlet of Waterton as the wildfire approached. Crews from a number of other municipalities including Lethbridge and Taber were also called upon.  Calgary's team returned home Wednesday as the risk to the town site declined. http://www.cbc.ca/news/canada/calgary/prince-of-wales-calgary-firefighters-1.4290763 Calgary fire Chief Steve Dongworth said local firefighters in Waterton, tasked with protecting the venerable Prince of Wales Hotel and other buildings, endured a hectic night facing down the massive blaze as it surged into the townsite. “To me, watching the fire coming down the valley at pace would have been very intimidating, and when the fire did arrive, it was very close,” he said, noting the crew worked in excess of 24 hours. “The building is unscathed to the best of my knowledge.” RELATED LIVE: Stay tuned here for real-time updates on the fire and evacuations Dongworth said crews in Waterton had been dousing the 90-year-old hotel with water and fire retardant foam in advance of the blaze. The hotel’s location, surrounded by grassland instead of forest, also helped keep it safe, said the chief. Calgary crews were able to quickly snuff flying embers from the wildfire, some the size of baseballs, which posed the greatest danger to the structure, Dongworth said. “We had a solid plan in place and we told them although the structures are valuable, none of them are more valuable than the lives of any of our people,” he said. http://www.pc.gc.ca/en/pn-np/ab/waterton/securite-safety/feu-fire-kenow