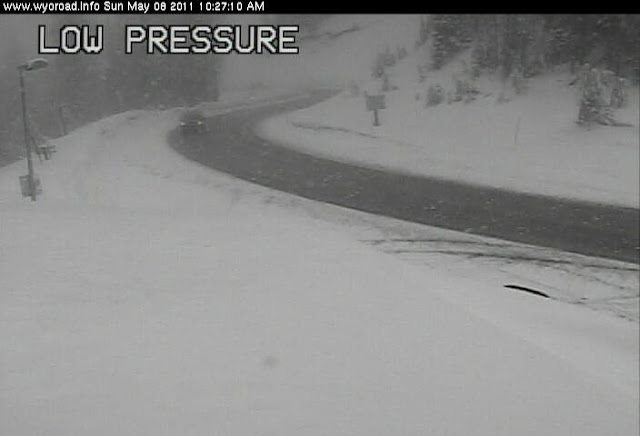 Meanwhile, the snowpack in the Upper Snake River is an eye-popping 169% of average!  The SNOTEL we watch is called Grassy Lake.  It's near the Reclamation Road between Ashton and Flagg Ranch just south of the Yellowstone NP boundary.  As of this morning, there 105 inches of snow there and that huge pile of white stuff contains 46.5 inches of pure water.  It appears we are getting the very first inkling of the onset of runoff season.  Grassy Lake peaked out at 117 inches containing 49.5 inches of pure water a mere week ago so it is beginning to shrink.  The Bureau of Reclamation has about finished drawing down Palisades Reservoir.  It's at 10% of capacity this morning but releases continue at 14,000 cfs.  The Snake through Idaho Falls is running 16440 this morning because there's 3258 cfs coming in from the Henry's Fork.  The difference between the Palisades release added to the Henry's Fork is because of irrigation withdrawals.

All eyes are on teh weather.  The BuRec says there's more snow sitting upstream than there was during the infamous 1997 runoff season.  That's when the Snake through town here peaked at 48,000 cfs.  That flow would have been the highest on record except the records are messed up by the bursting of the Teton Dam in 1976.  That catastrophe caused the river here to flow perhaps 100,000 cfs.  Nobody knows the real peak during that crises but it was epic, to say the least.  Anything in the mid-20000 cfs range is generally considered to be within the top 10-percentile of river flows here.

What's on everyone's mind is the propensity of weather to change suddenly from one regime to its opposite.  In other words, will it go from cool, damp to hot dry overnight?  It's not uncommon for such a sudden reversal to occur.  In fact, these days, it's almost the "new normal" rather than a flukey exception.  The other fear is that a freak heavy rainstorm might park itself over the deepest part of the snowpack and unleash holy heck downstream.  The BuRec walks a very fine line on Jackson Lake.  If they guess correctly, they gain just enough water to refill that potato lake.  if they guess wrong, one of two things happens: A) the lake finishes the runoff season underfilled and the potato growers are angry or B) they don't let out enough water and the dam is in danger of overtopping.

The truly nightmare scenario that remains unspoken is a total overtop of Jackson Lake Dam.  It's an extremely remote possibility and that's one reason nobody mentions it.  But it IS a possibility in years such as this.  If a freak storm were to unleash the upper snowpack all at once, it's almost certain the dam would be overtopped.  No one really knows what would happen in a circumstance such as this.  Chances are the dam would not fail because it has been reconstructed to withstand anything short of Armageddon. However, the law of unintended consequences could kick in and that's a worrisome thought for those who watch snowpacks like this one.

Palisades is drawn down enough there's no real worry about a repeat of 1997 here in Idaho Falls.  The chances of the snowpack getting totally out of control are very, very small.  However, there's always the Wild Card in any equation and when a region as large as this one is sitting on as much snow as we have, it doesn't take much to tip the equation out of control.

Since it's safe to say runoff season began in the first week of May, we now have approximately 6-8 weeks before runoff season comes to an end, barring an "act of God" rainstorm.  Typically, a normal runoff season will peak sometime in June, usually mid to late June and then begin to taper off until returning to mostly normal flows in early July.

This year, those 6-8 weeks loom large on the radar of those in the know.  There's going to be a lot of nail-biting and hand-wringing going on during the weeks ahead--of that, you can be certain.  Stay tightly tuned to this saga, folks, no matter how it turns out, it's going to be one for the history books.  Today's BuRec teacup diagram is below.  You can click here for an interesting May 5 article from Jackson Hole.

Wow! To think of winter still happening (when it's been over here for what seems like months) is incredible. We can't believe that image. Been over Teton Pass many times tho and know what it's like. Thanks for sharing.

You should check the rainfall situation in hawaii!!
Mostly Kauai. Haven't seen the sun in days!! Well, maybe for a moment or 2 here and there. :)