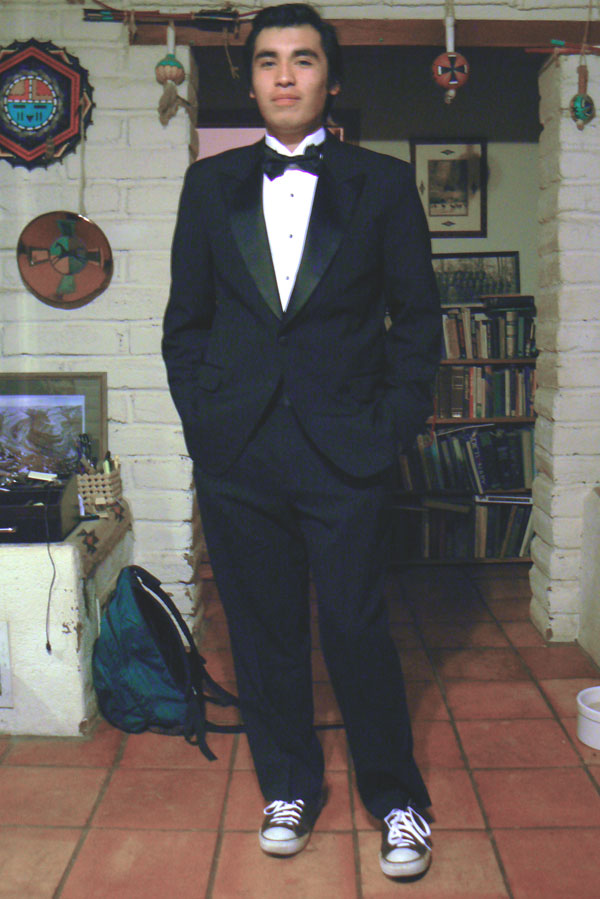 This morning we would like to present a new, never before seen version of The Upscale Joshua, soon to be a Red Rock High School graduate.  Yea, verily, he appears ready to be set loose upon the world at large.  This is Joshua as he appeared last night before driving his vintage diesel Mercedes off to enjoy that arcane teenage ritual known as "the prom."  Very suitable and fitting "get up," don't ya think?  Congratulations, Joshua, we're all rising now to give you a hearty round of virtual applause!!!!

It's been raining lightly here for over 12 hours.  Temps are mired in the mid-40's.  Our region has many names.  The most common is "Intermountain West."  Some people call it the "Inland Northwest."  Well, today feels like a typical Seattle day--drizzly rain falling through chilly gray air.  Brrr....we're running the central heating system and our little electric heater, too.

Yesterday, we attacked our dandelions with classic vengeance using both a stabbing device and targeted blasts of poison to their yellow faces.  We massacred most of them but those strange weeds are incredibly tenacious and there will be more.  They are the proverbial seven-headed hydra of urban lawns.  Meanwhile, the gentle rain has been the perfect way to soak in the fertilizer applied Thursday.  The yard is in the best shape its been since we bought this place in September 2007.  Summer croquet, here we come.

We got a nice phone call from a long lost friend, Meg L.  She's in 29 Palms right now and will be traveling all over America (except here) until she returns to India in August for a five month sojourn. It was great talking with her.  It's nice to know Meg is reading this blog.  Thanks and Happy Trails, Meg! Meanwhile, we learned our neighbor Danielle is an LBR!  She had some very nice things to say about the blog and we really appreciated her words.  We've been in one of those comment droughts lately.  There's been only four comments since April 29--one of the longer droughts we've experienced in many months.  We suppose that's because we are writing about truly mundane and boring stuff.  Hey, mundane happens!

We went out to the Far East of this area yesterday to met with a local HAM Head.  He tested our Yagi antenna.  Oddly, the little thing works like a Voodoo Magician yet its "numbers" are way off.  He suggested I mess with it but, hey, it works, so I'm leaving it alone.

Today's one of those days when there are few real alternatives for doing stuff outdoors.  So, it looks like we both troop downstairs to the basement and log some hours messing with our stuff.  It's kind of a penance, actually, or perhaps the equivalent of spending time in limbo or what the Catholics call purgatory.  Our feet shuffle around a dark, cool, walled-in basement while our hands shuffle stuff from one resting place to another.  It's an age old ritual, a never ending cycle of human futility.  That's why they call it the Stuff of Life.

Have another great day and Many Cheers!  jp
Posted by John Parsons at 8:57 AM

Your basement chores remind me of goat pen cleaning. Both are Sisiphean punishments; endlessly repeated and always done with the (futile) hope of never having to do it again. Have fun.

I really like Josh's updated shoes to spats. Nice touch. Reminds me of alter boys at my friends' Catholic wedding, actually.