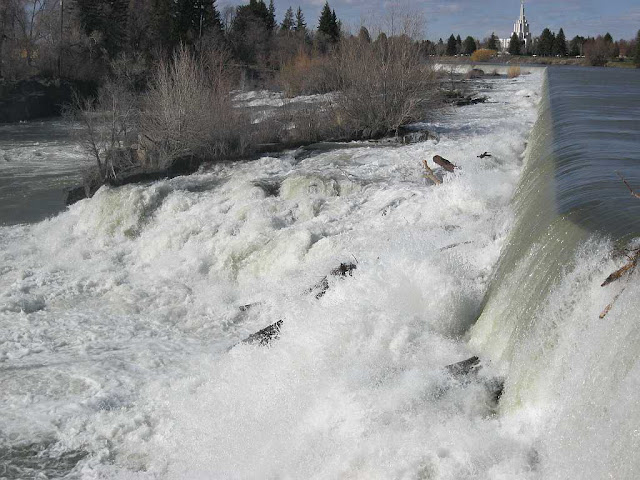 Note that the photo above was taken from the mid point of the bridge below. 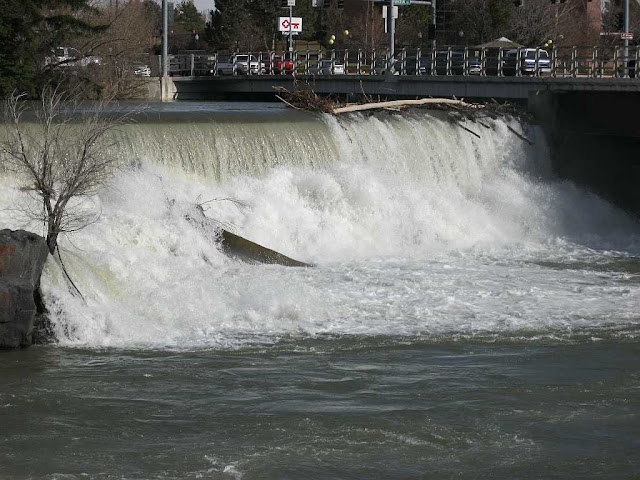 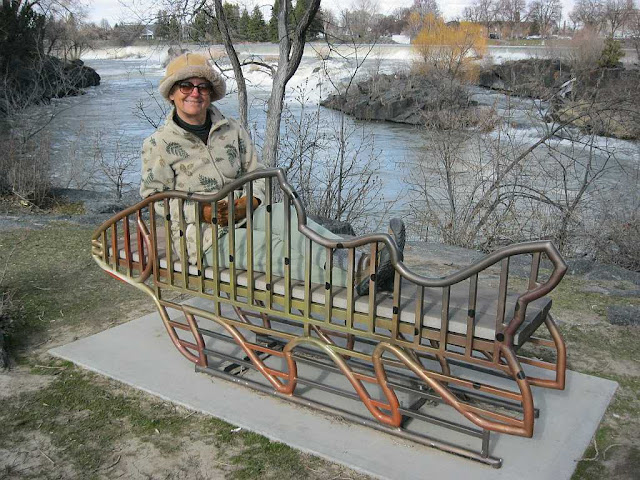 The Art Bench Saga continues.  We will talk about it in the morning. 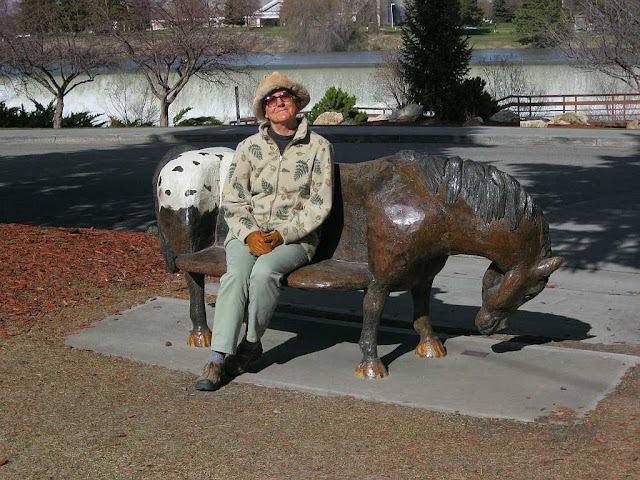 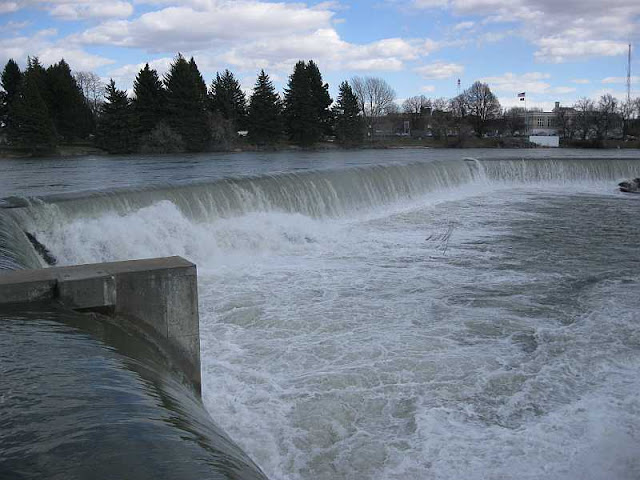 Most everything we can think of is done--except for the unpacking, of course--why bother with that now--it's just sitting in the vehicles anyway.  Who cares?

Susun kicked back and didn't do anything today.  Well, she DID make plans to go to the last Symphony of the season Saturday night.  And she DID go to Sam's Club to buy her favorite face cream.  And she DID make a pot of chili tonight.  Well, heck, she DID go putting and she DID even go to The Falls to gander.  So, I guess I stand corrected---she did actually do some stuff today.  She herself says she didn't do anything so you be the judge.

Me?  I was all over the place running hither and yon and having a blast as usual.  I even paid to get a haircut.  Yikes!  I visited several stores but only spent money in my Mecca: Harbor Freight.  We left all our tools down in Arizona on purpose.  We decided we want to have two self-sufficient places so we don't have to lug tools back and forth twice a year.  What a pain!  So, whenever I need something, I have carte blanche to go buy a duplicate of what's already sitting in the dark down in Arizona. Cool, huh?

The Snake is running over 19000 cfs right now.  The Bureau of Reclamation is paranoid about the snowpack and is trying to drain Palisades Reservoir down to 8% prior to the onset of the runoff season.  This level is about as high as they can release without flooding people down in Blackfoot.  It's touch and go with the snowpack this year.  There's huge quantities of snow up in the Snake's headwaters in Wyoming.  We're talking 10+ feet with 4+ feet of snow water equivalent.  That's huge.  The BuRec is worried that if it gets hot suddenly it will all come down in a rush.  They want to basically empty the reservoir and hope for the best.  We wish them luck.

Anyway, when the Snake is running this big through River City, it's Show Time.  Tourists and residents go down to watch The Show.  We gotta admit, it's one heck of a Show!  Something tells us it's gonna get a whole lot bigger before it's all over in July.  If the Bu Rec guessed wrong, all heck can easily break loose in a hurry.  Only time will tell. 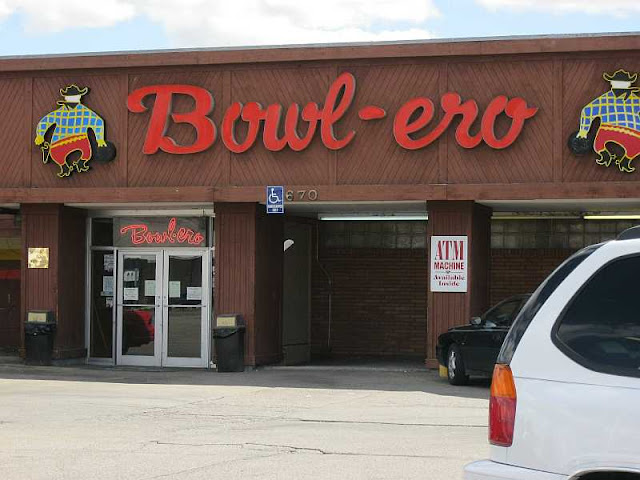 We checked out our local neighborhood bowling lanes today.  It's kinda pricey to bowl there but at least we can walk to the joint.  We've been pricing bowling balls on Craigs List and we talked to the lane owner about getting a new custom ball today.  If we're gonna start bowling again, we might as well stack the odds in our favor. 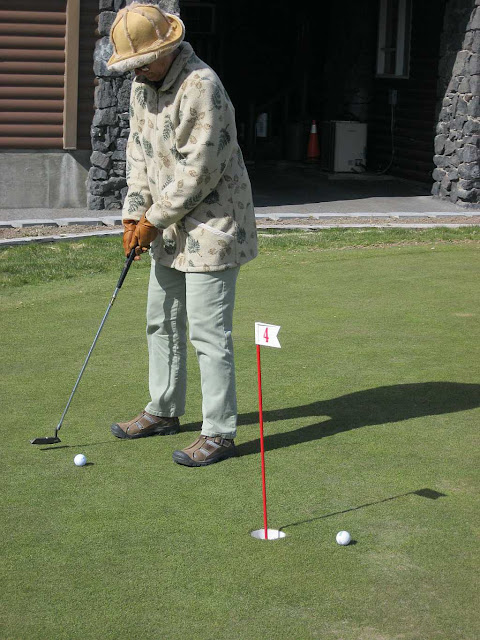 We didn't get to play a round of $3.25 golf but we did actually go to Pinecrest to putt for awhile.  Susun likes putting around.  So do I.  As LBRs recall, I bought a kid's putter in Mesa and it rox.  Susun's has some real nice putters here in Idaho and she picked out one today that has really did improve her putting game.  It was in the low 40's when we were putting but it felt tropical.  (Yeah, sure, Yonni.) 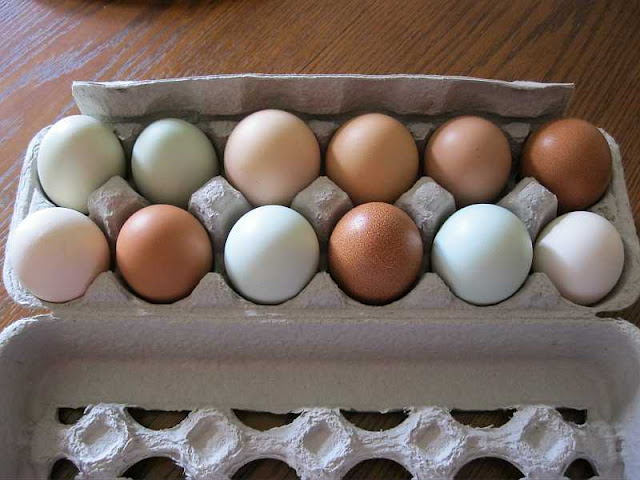 Ok, whazzup with los huevos?  Well, we want to eat real eggs here so we checked Craigs List and somebody out in Iona (Yes, that's a real place) who sells organic eggs for two bucks a dozen.  Luckily, they take them to Idaho Falls each day and sell them in a Kirby vacuum cleaner place.  Luckily, the vacuum cleaner place is only three blocks from here.  So, we might not have urban chickens or eggs from urban chickens but we have urban eggs cheep.  You can click here to read their CL listing.

That's about all the news I can write before I snooze.  There's more to talk about but we will save it until tomorrow morning.

Have a great evening & Cheers, jp
Posted by John Parsons at 8:53 PM

A very nice blog post! So much to say but at the very end, I went to the Craig's List for the organic eggs and just loved the line:

proudly LAID in the USA!

Gimme some o' those eggs!

$2 doesn't even cover the chicken feed, so to speak. Those folks are kind, but loosing money. I raised my egg prices to $3.50 in Boise now. It takes a lot to raise free range chickens. And I"m glad you guys are buying. I'll post a blog soon on the new coop. It's on my FB page but I haven't done the blog yet. It's a lovely new coop. Now for the chicken run.