Gotta put it out there 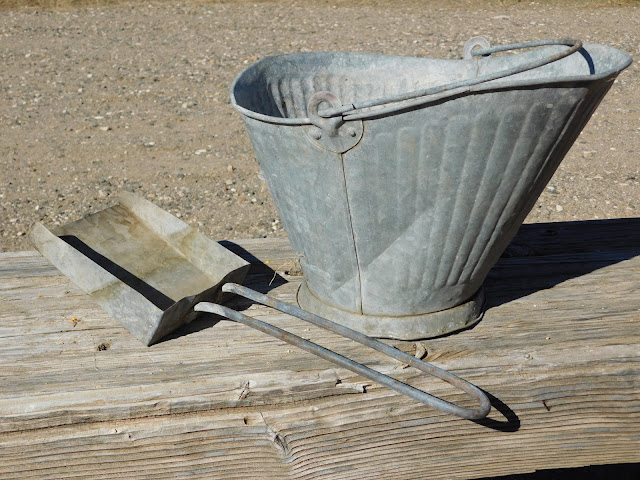 We're riggin' for our first camp Road Trip in 10 weeks.  When we arrive Back In The Tonto Again Monday it will have been 71 days since our most recent camp trip ended.  Yep, that's 10 weeks alright.

The details and difficulty of riggin' for a camp trip is directly proportional to the length of time  since the most recent trip.  All sorts of vital items stray far, FAR away from the travel trailer.  The pantry gets robbed.  Supplies become depleted.  Batteries decide to go dead.  The longer the sedentary duration, the more difficult the prep work for the next camp trip.  And so it goes.  We well know the drill.

This time around we decided to complicate matters by deciding to obtain a metal bucket  with which to clean our camp site fire ring.  For some reason we've never understood a lot of people are downright pigs when it comes to the fire ring.  They throw trash in there and leave partly burned wood.  It's particularly vexing at Roosevelt.  So, we just assume we're going to have to roto-root the fire ring and carry off a LOT of stuff to the dumpster.

In the past, we've gingerly used a plastic bucket and somehow not melted it into a disfigured avant garde sculpture.  This trip we said, "We have to have a metal bucket."  Period.

So, we put a notice on our local Facebook buy-sell group and within mere minutes received a reply from a very nice local person who offered to give us a metal bucket.  Of course, we figured since it was free it was going to be a dented, beat-up derelict bucket.  Much to our amazement last night, the bucket turned out to be an antique coal bucket complete with scoop!  We were shocked and told the donor so.  The person was very gracious and happy to give us the bucket.  Sometimes it's so surprising what comes our way when we simply ask for something.  "Ask and you shall receive,: eh?

So, that bucket is the missing piece in our camp fire puzzle but lots of grunt work remains to get the rest of the puzzle together.  We haven't purposely built a campfire in over 9 months so you can imagine the "hide & seek" game we will be playing with our fire tools, etc.  What fun.

One of the biggest chores of riggin' is always battery management.  Geeze, Louise.  It just goes on and On and ON!  We have so many different elect5ronic devices and many of them have their own unique batteries.  It takes nearly a full day to find them and get them all charged up.  We're not complaining.  We're thankful to just HAVE all those electronic devices. Charging their batteries is definitely a First World problem.

As our Dear Friends and regular readers well know, we travel with way too many gizmos, gadgets and Gee Whiz kinda toys.  What's a geezer to do if he can't fiddle around with all those whirly gigs in camp?  It takes hours to make sure all of the toys are packed, hours to set them all up and hours to take them all down and pack them up to go home.  But what elses would I be doing anyway?  Sitting around admiring the scenery?

Riggin' for a trip to Roosevelt always means lining up peripheral stuff.  Like what, Yonni?  Well, in this case, we're hard at work on the Easter Sunday 1979 Salt River Rescue Story.  A few weeks back we advertised in Globe to find an eye witness who was there.  We got lucky and found an AZGFD Officer who was a member of the rescue crew.  So, we've been finalizing the details to do an oral history interview with him in  We have also been making appointments to visit our Dear Friends in the Globe/Miami area.  So that's all part of riggin', too.

Most of our Menu and Pantry Gig is all taken care of.  We overpacked coming south from Idaho so we still have enough food in that travel trailer to go camping for days and maybe even weeks.

We will be camping once again at Site #287.  It's the one we camped at last year.  It has two perfect hammock trees and a 40-foot bocce ball court.  The bocce area in that campsite is one of the finest bocce courts we've yet found in any camp site anywhere.

Uncle NOAA has upped the ante on rainfall so it's probably gonna be wetter than we'd prefer.  That means we have to rig rain gear and various other rain-related stuff.  That's not a hassle, per se, at least as along as we remember to actually do it.  It definitely is kind of a bummer to camp in the rain without all the rain-related stuff.  There's no such thing as bad weather--it's just bad gear or the LACK of gear that  makes the weather seem bad.  Well, at least if it's not -37 degrees in three feet of snow.  That would be Bad Camping Weather in just about anybody's book.

Anyway, that's our daily activity agenda through today, all of the weekend and probably Monday morning as well.