When a loss is a gain 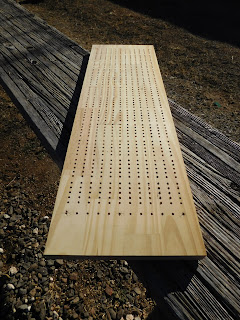 You lose some, you win some. It's pretty much The Way of Life.  So we lost one yesterday but we won one, too.  Here's how it all came down.

Back in early December we played cribbage with some local geezers at the Beaver Creek Community Center.  They really oughta call it a Senior Center since geezers are the only ones who use the place.  But we digress.  Anyway the geezers were playing on a board so small some of them could barely grip the microscopic pegs.

So I decided to make a multiplayer Big Board and donate it to them.  As some readers know from following our Facebook, I found a nifty way to drill 732 holes and keep them all straight as a piano wire.  Then I had the board trimmed out on a table saw; sanded it 'right & proper" and made six sets of color-coded pegs.  I was really stoked to present the board to the geezers yesterday.

Well, it sure didn't work out the way I thought it would.  Nobody liked the board.  One guy said outloud, "Your Board sucks."  Geezers are creatures of habit and those geezers really like playing on a teeny, tiny board.  People were not happy about playing on a custom made Big Board and they let me know.  It was rather humiliating but I took it in stride and never let them know I was humiliated.  During the two hours of cribbage play, I won half my games and had some pretty good hands.

Meanwhile, I packed up my Big Board and color-coded pegs and returned home with them.  However, I flipped the script and was very happy to retain possession of the six player Big Board.

Well, the primary reason is that those geezers taught me all of the cribbage variations and permutations I had never learned or played before.  Now I know how to play cut throat cribbage with 3-4-5-6 players.  I also know how to play doubles with four players.  I'd never bothered to learn those variations before and actually didn't want to know them.  But they are fun.  WAY Fun!  In fact, both four person doubles and 5 or 6 player cut throat cribbage could be my new favorite games.  It's a real horse race playing again four or five other people and the Big Board makes it even MORE fun for me.  It might not make it fun for that particular covey of geezers but it sure does work for me.

So, I was real happy they didn't like my board and that's how a loss turned into a gain.  Having the multiplayer Big Board will add an entirely new dimension to all of our cribbage both here and in Idaho Falls.  It's exciting to think about and we're thankful we made the board.  We're VERY thankful the local geezers didn't want it.
Sometimes ya gotta lose to win!
Posted by John Parsons at 7:05 AM