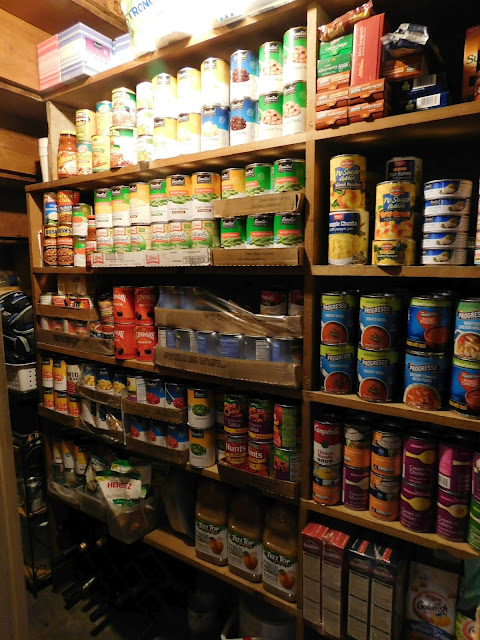 We love a good pantry.  We actually began shopping for a house in Idaho Falls in October 2005.  We made up a spreadsheet of "must have" items to give to our Realtor.  One of the Top Five items was a pantry.  From our perspective, a house without a pantry isn't truly a home.

Ten years ago in August 2007 we began a serious search for a home here.  We told our new Realtor, "Don't bother showing us any houses without a pantry."  That's just how much we love pantries.  Luckily, our 1939 bungalow has an unmolested, ancestral, LDS-style pantry in the basement  Oh, JOY!  Between 1939 and September 2007 when we closed on the deal, no one has ever changed a thing in the pantry from the very day it was built when the house was brand new.

You have no idea how delighted we were to buy a house with a genuine 1930's era pantry.  For the past ten years, we have enjoyed restocking the pantry each and every year.  We generally restock around Labor Day, plus or minus.  The latest we've restocked was late September.  Today we finished our earliest-ever restocking on August 12.

Yes, we do cull our inventory.  In fact, we cull it each spring and fall.  We take all our culled goods to the local Food Bank and they are always happy to get high quality stuff that's not ridiculously beyond code date.  Today we culled out enough to fill a full six gallon milk crate full of stuff.

The grocers generally tend to feature their lowest prices on canned goods this time of year--right around "back to school" and just before the onset of fall.  Three local grocers do case lot sales right after Labor Day.  This year, Albertson's decided to get a jump on their competition and dropped name brand canned vegetables to a price we know to be the lowest of the annual cycle.  So, what the heck?

We decided we might as well restock sooner rather than later.  A few odds and ends remain to be procured but the pantry is once again in good shape.  Most of the inventory is code-dated out well into 2018 and mid-2019.  So, we're good to go once again.

It's such fun that it's kind of a let down when it's done.  We love a good pantry! 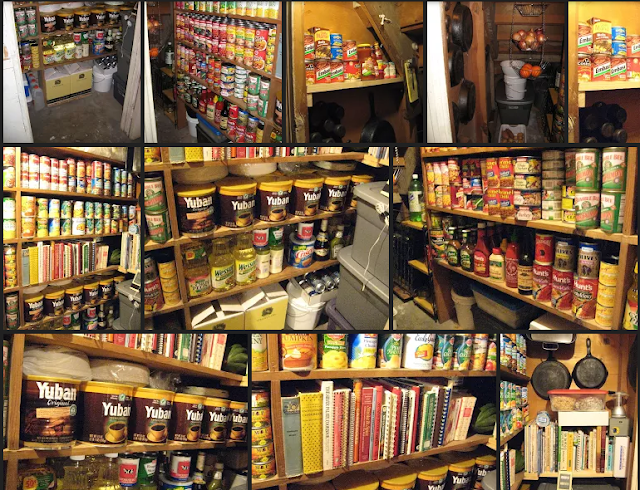 Above is a screen clip from the January 2019 photo album of our pantry after it was tidied up.  The link is ridiculously long but it "should" work.  Only those who love pantries should bother looking  at this album.  Otherwise, it could cause terminal boredom!

If the above link won't work, try this one: