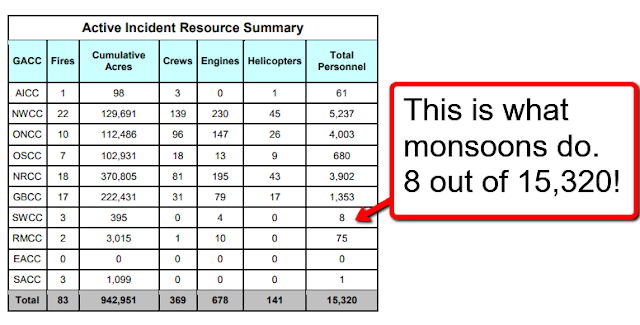 Yes. Eight People.  That's how many people are assigned to wild fire incidents in the Southwest Coordinating area which includes ALL of Arizona, New Mexico and most of West Texas.  EIGHT People!

Meanwhile, there are over 15,000 people assigned to national wild fire incidents.  I don't know what the percentage of 8 is to 15,000 but I think it's it's pretty minimal.  This is what monsoons do for the Southwest United States.   So, the next time the lightning is crashing down on your head and the flash floods are washing away your stuff, reflect on this.  It wasn't too long ago that a couple thousand people were feverishly trying to snuff tough wild fires running hither and yon across the wily coyote landscape of hardscrabble Arizona.  Now?  Not so much.  EIGHT PEOPLE!

Meanwhile, there are well over 9000 people in the Northwest and Northern California and over 5000 between the Northern Rockies and The Great Basin.  Don't they WISH they had a monsoon like Arizona does!