Our All Time Fastest Road Trip

Each of us....YOU and Me and everyone reading this post has a Personal Best Road Trip.  It might involve time or space or distance or even unique weirdness.  But we all DO have those memories.  That's what growing up is all about.  That's what being a parent taking your kids someplace special is ALL about.  That's what being alive in American is all about.  Road Trips are part and parcel of my and your American Experience.  What would we be without Road Trips in this Country?

Talk turned tonight to our own Personal Best Road Trip in September 2002.  I think it was September 12th but I might be off one day left or right on the calendar.

For whatever reason, we had decided to become Volunteers to run a California State Park in Red Bluff.  It's the William B. Ide Adobe State Historic Park and it's arguably The LEAST known state park in the California system.  Essentially, that State Park tries to interpret the end of The California Trail and what it  was like to FINALLY wash ashore in California after months of terrible travel.

We were smitten with the place because one of their premier displays was a cribbage board.  YES!  Apparently, all the California Trail Pilgrims threw EVERYTHING off their wagons EXCEPT their cribbage boards.  Part of our job description there was to interpret the Role of Cribbage in Pioneer Life. Oh, yeah, how we could relate to that!

Well, anyway, we met with  the Park People to "seal the deal" but before we sealed the deal, we said we had to do some more "research" in the local library.  We didn't want to be blind sided by local politics so we figured we'd go read back issues of the local newspaper to see if there was some missing piece to the puzzle.

While we were in the library, Susun said she would check her phone voicemail.  She came back and said, "Our Home has been flooded!"

We cut short our meeting with the librarian and rushed back to our tent camp alongside The Sacramento River and we literally threw every thing into the back of the truck and left a little before 6 PM.  We drove like bats outta someplace and arrived nearly 1000 miles later at our place in Rimrock, Arizona, before 9 AM the next morning.  It will forever remain as THE Single MOST Epic Road Trip either of us has ever done.

There have been other Road Trips that have come close, but none have ever topped that one! 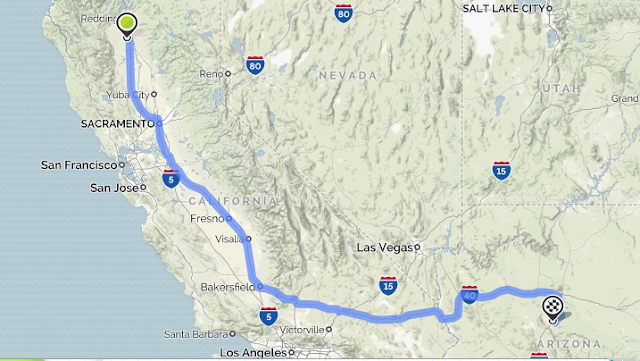