All clear for eclipse...or not 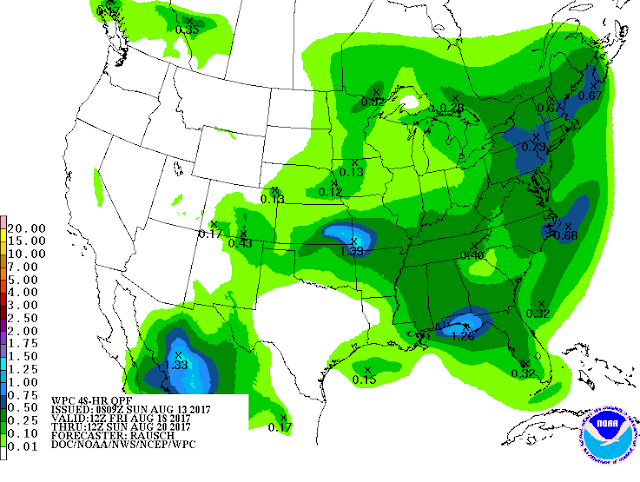 Above is the Sunday morning 7-day QPF which covers the period ending at 5 AM next Sunday, August 20.  Note there is no precipitation in the forecast for all of Oregon, Idaho and Wyoming--the first three states that are in the Path Of Totality for the eclipse.  It's highly unlikely that precip will somehow spring up on the day of the eclipse.  Possible but unlikely.   So, it looks like it's going to be "all clear" at least as far as rainfall goes.

However, with so many fires burning, it's really impossible at this time to hazard a guess about the "smoke issue".  If you're lucky you might be in a smoke-free zone.  If you're not so lucky, your sky might be totally obscured by fire smoke. It's a roll of the dice...and it's an issue that can change from day to day, sometimes even within a few hours.  The fickle factors of air flow, wind, topography and just plain karma will have a big impact on who sees a pristine, clear air eclipse and who doesn't.

A quick glance at the spreadsheet data for current fires indicates that over 80% of them have estimated containment dates well after August 21.  Some have containment dates as far out as October 30, which is "code" for  "when the snow flies".

Plus, there is the ever-present factor that yet one or more wild fires could ignite in your local neighborhood between now and next Monday's event.  Ya just never know.

As we enter the final week's runup to the eclipse, we fully expect an avalanche of publicity, hoop-la, hype, and people.  Here's a fun article about the role of Flagstaff's Lowell Observatory in eclipse viewing at Ground Zero--Madras, Oregon.  Let's hope they have clear skies!  But with so many Oregon fires burning upwind from Madras, clear skies would be something of a miracle for that location.

Fingers crossed for a clear viewing