Good Morning!  It's a fine Blue Bird Sunday here.  We didn't really intend to do a Morning Edition today.  However this morning was typical.  We were doing our usual morning reading and, well...we find stuff that begs to be put together into a Morning Edition.  So, here ya'll go.

The first article is the one that put us into "Morning Edition Mode."  As you know, we dearly love Old Warbirds and this article warmed our heart.  So, we figured maybe a few of our readers would enjoy it as well.  What's not to love about this quote from the article:

Saks works on the real warbirds for three reasons: “To preserve history, to honor veterans and to satisfy my artistic soul,” he said. 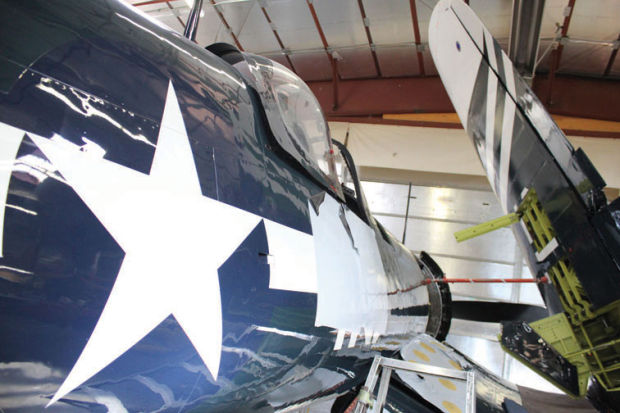 OK, we really didn't get very far afield today.  We stumbled into an article that took us off on a ridiculously long tangent.  If not for the fact that we have a lot of other stuff to do this morning (away from the computer) we would probably still be roaming far afield into the topics that this story brought to our front burner.

We hadn't visited the Missoula newspaper in quite some time so we decided to check in and see "whazzup."  We found two items.  The first one is the one that took us off on the long tangent.  It is a really small item about the Montana Centennial Train.  Well, you know how it goes with us sometimes.  We started researching the Montana Centennial Trail and that took us to Waymarking and then to  the New York World's Fair in 1964 and then to the Charles Russell so-called "Centennial Stamp" and then to the painting depicted on the stamp and then to a couple of wealthy art collectors and, geeze, it just kept going on and on and ON.  We finally had to force ourselves to stop.

OK, here is what got us started: 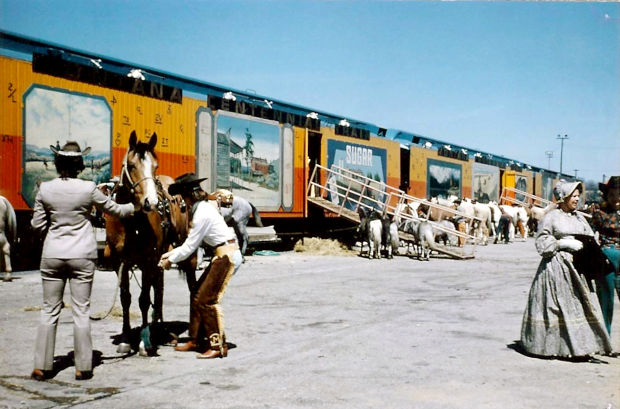 Here's a little blurbette about the Montana Centennial Train:

Then we found this superb idea that we could spend a few days exploring:

A CELEBRATION THAT ROLLED ON THE RAILS
1964 marked 100 years since Montana was established as a territory. How would the state eclebrate this milestone? The challenge to develop a unique showpiece led to the idea of a train that would tour the state and surrounding region to showcase Montana’s history and resources.
AN IDEA THAT KEPT ON GROWING . . . . UP TO 25 CARS!
Stagecoaches, wagons, 72 horses, exhibits from the Montana State Historical Society, even a display of a million-dollar collection of gold were loaded onto train cars. Over 300 Montana citizens traveled on the train to help promote the state. The 100th Birthday Train grew to over 25 cars.
ALL THE WAY TO NEW YORK CITY!
The Centennial Train left Billings on April 5, 1964 for a tour of 16 cities stretching all the way to the east coast and back. Each stop included a parade, banquet, and other festivities. During the stop in Washington, D.C., a grand dinner was held in honor of President Lyndon Johnson, with Montana native Chet Huntley serving as toastmaster. The train was in New York City for the opening day of the 1964 World’s Fair, and it served as the backdrop for the Montana Pavilion’s pioneer village for two seasons.
DRESSED FOR THE OCCASION
Art panels illustrating the state’s history, wildlife, recreation, and industry decorated the train car exteriors. Some cars displayed Montana ranch brands made from Anaconda copper. Imagine seeing this colorful train as it traveled across the country, painted in colors that evoke images of the Montana countryside and sky, the bedecked with artistic treasures?
A FINAL HOME IN WEST YELLOWSTONE
The train returned to Montana after the close of the World’s Fair in 1965. Seven of the cars were given to gateway communities in the state to serve as visitor centers. West Yellowstone received a “Cow Belle” car embellished with copper brands. When the Chamber of Commerce outgrew the space, the train car was used for retail operations. In 2003, it was donated to the Yellowstone Historic Center by the Povah family to once again serve as a showpiece of Montana’s history.

Well, anyway, we won't bore you with all the stuff we found about the New York World's Fair.  That's a whole 'nother galaxy of content.  Anyway, while researching the archives of the Montana Centennial Commission ( http://nwda.orbiscascade.org/ark:/80444/xv57461 ), we learned there was a so-called Charles Russell Centennial Stamp issued in 1964.  Montana kinda did a little "claim jumping" on this stamp.  It was NOT issued for Montana's Centennial!  It was issued for the 100th Birthday centennial anniversary of Charles Russell's BIRTH DAY on March 19, 1964.  Yes, Charlie was born on that day in 1864.

Here's the stamp that was issued in Great Falls.  The Post Office eventually printed 128-million of these 5 cent stamps.  Well, it turns out that the scene on the stamp is one of Russell's oil painting's entitled "Jerked Down."  Naturally, we began searching for "all things Jerked Down."

Russell did the painting in 1907 and it was sold to an Eastern Friend and collector in either 1908 or 1911--the accounts vary.  Somehow it wound up in Tulsa, Oklahoma, even though some accounts still say it is Helena, Montana.

Here's a fun history of the guy who started the museum where "Jerked Down" supposedly resides: 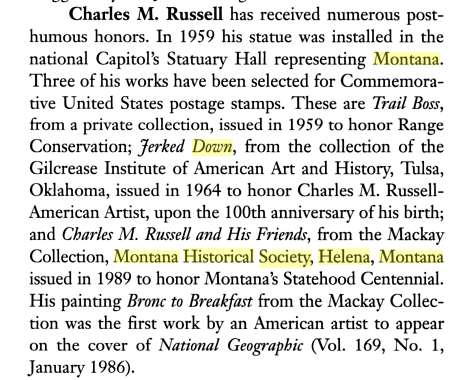 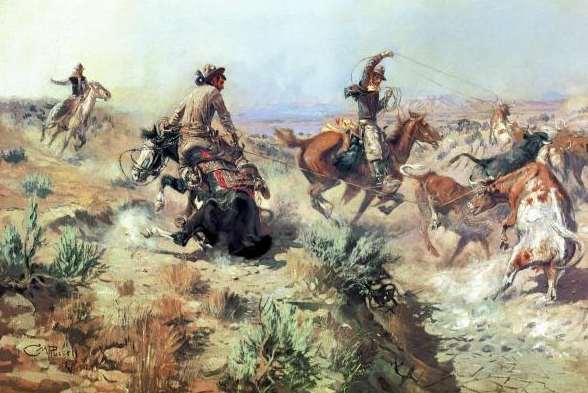 Interestingly, we happen to have acquired a very complete history of Charles Russell's artwork last December at the annual Clarkdale Library book sale held in conjunction with the "Made In Clarkdale" event.
The painting is mentioned in the book but not shown.  Nor is any other information available about it.  You would think that more background would be available on such a widely circulated Russell painting.
Alas, as we said, we finally had to call it quits on traveling this tangent.  It sure was great fun! 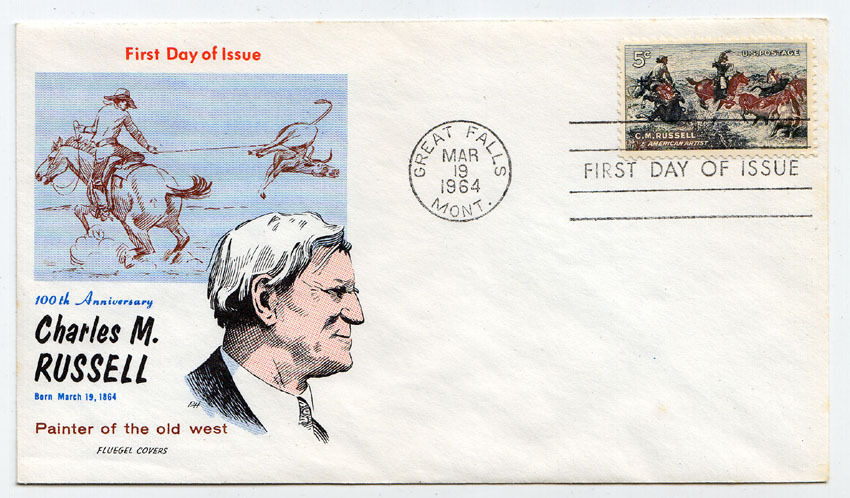 Here's the other article we found from the Missoula newspaper.  Everybody loves T-Rex, right? 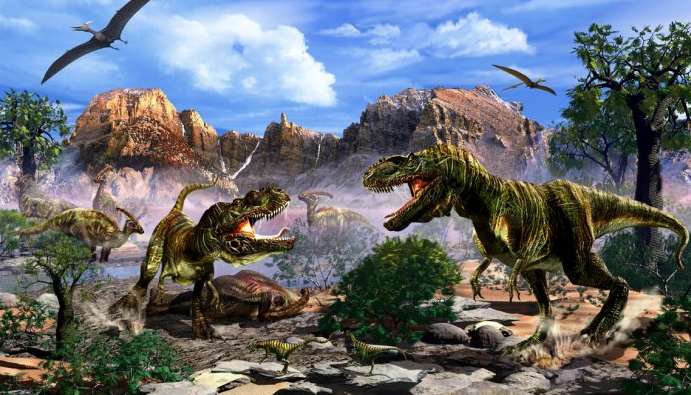 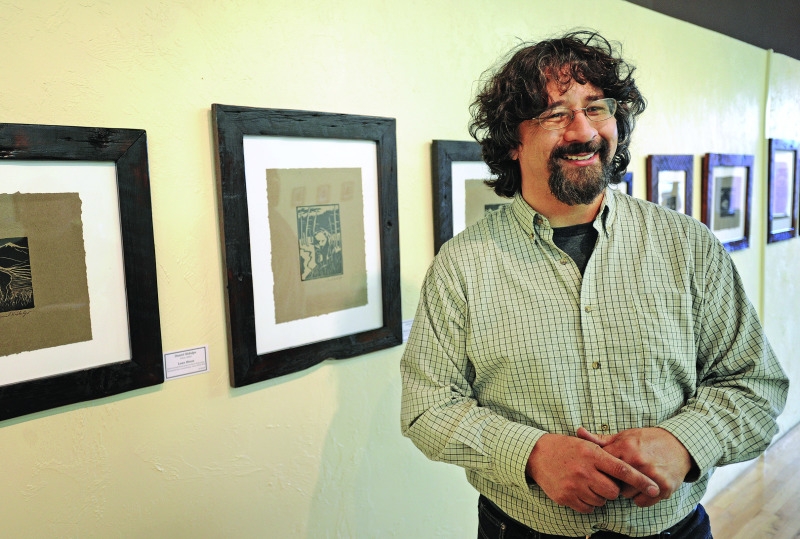 This story would be hard to believe or retell if it was written up in today's Idaho Falls newspaper.  It's from The You Can't Make This Stuff Up Department.


'Dung and Dunger'
Finding inspiration in a 'buffalo chip'
By MIKE MOONEY
(Copyright 2014 "The Post-Register," All Rights Reserved.  Reprinted with permission.)

BLACKFOOT -- Most of us wouldn't seek inspiration in a "buffalo chip."

It is excrement, after all.

OK. One could make a reasonable argument that bison dung is necessary to the ecosystem, leaving behind various nutrients in the soil where it's deposited, as well as providing nourishment and shelter for insects and other small critters.

Still, it probably is safe to say that bison feces is something most people rarely, if ever, think about. It certainly is not a substance most people would seek out, scoop up and haul home in a large plastic storage container -- the same kind mom and dad use to store their Christmas decorations.

But then, artists Victor Bruha and Daniel Hidalgo aren't most people. They are "Dung and Dunger," who create block prints of animals -- moose and elk and wolves, among others -- on bison dung paper they make themselves. As if that wasn't enough, an exhibition of their artwork opened Saturday at the AKI Studio and Gallery in Blackfoot.

"We came up with the concept about 10 years ago," Hidalgo said. "Victor was watching a documentary about elephants."

Bruha immediately called his buddy, Hidalgo. The men, now in their early 40s, first met when they were junior high school students in Blackfoot.

Hidalgo embraced the idea. He saw the possibilities.

"Bison are North America's largest mammal. When foreigners visit Yellowstone (National Park), they find bison just as exotic as elephants ... are to us," he said. "Artists are storytellers and a good story makes good art. The (bison dung) paper is unique to our area."

"Most of the people I told ... they were pretty skeptical," Bruha said. "They would say things like, 'So, you want to play with poop, do you?'"

"They thought we were crazy," he said. "When people think you're crazy ... that tells me you probably have a pretty good idea."

It took about a year of trial and error before they came up with the correct blend of liquefied dung and recycled paper. They boil the dung -- outdoors -- in a kettle to get rid of any foul odors and kill any potentially harmful bacteria. The paper they create contains fibers of grasses that passed undigested through the bison.

When the dung is boiling, Hidalgo said the odor reminds him of the smell of a freshly cut lawn. The finished product must be handled with care.

"The paper is very fragile (and) very soft. You can't run it through your home printer. It's also sensitive to water. We don't add any glues or binders to it. It's all natural," Bruha said.

For those who may be wondering, a large plastic tote holds about a two-year supply of dried dung. And one football-sized chunk is enough to generate about 20 sheets of paper.

Bruha and Hidalgo do not sell reams of dung paper and don't give lessons in how to make it. It's used strictly for their art.

Most of the early arrivals at Saturday's exhibit opening and artist reception were family members and friends, although by late afternoon, more than a few curious Blackfoot residents had wandered into the gallery.

While both Bruha and Hidalgo understand the novelty attraction of bison dung paper -- they've heard every joke under the sun, and more than once -- they also are serious about their art. Their work is sold in and around Yellowstone National Park. It is especially popular with foreign visitors, Hidalgo said. But sales aren't their only motivation.

"Being a part of Yellowstone is a tremendous honor," Bruha said. "You feel like you're a part of the history of the park."

Even some family members, however, are surprised that Bruha and Hidalgo have created art that is both in demand and enduring.

"I thought it was a flash-in-the-pan type of thing. I never expected ... the quality of the art it's become," said Bruce Nelson, Hidalgo's uncle. "But, I've learned never to underestimate Daniel."

Dung & Dunger artists Daniel Hidalgo and Victor Bruha are displaying block prints -- printed on handmade bison dung paper -- at AKI Studio and Gallery, 41 N. Broadway, Blackfoot. The exhibition opened Saturday and runs through May 1. The gallery is open from 11 a.m. to 1 p.m. Monday through Friday and noon to 4 p.m. Saturday. Call 785-2300. 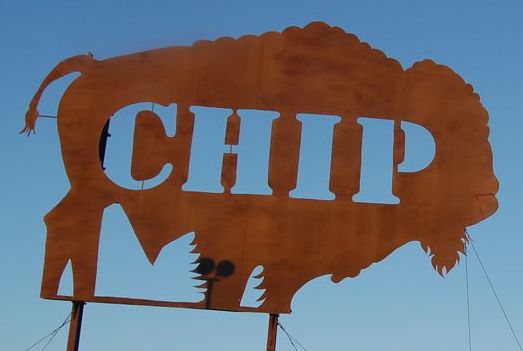 And finally, we ust had to include three of Sweetie Susun's Grin Kid Photos. 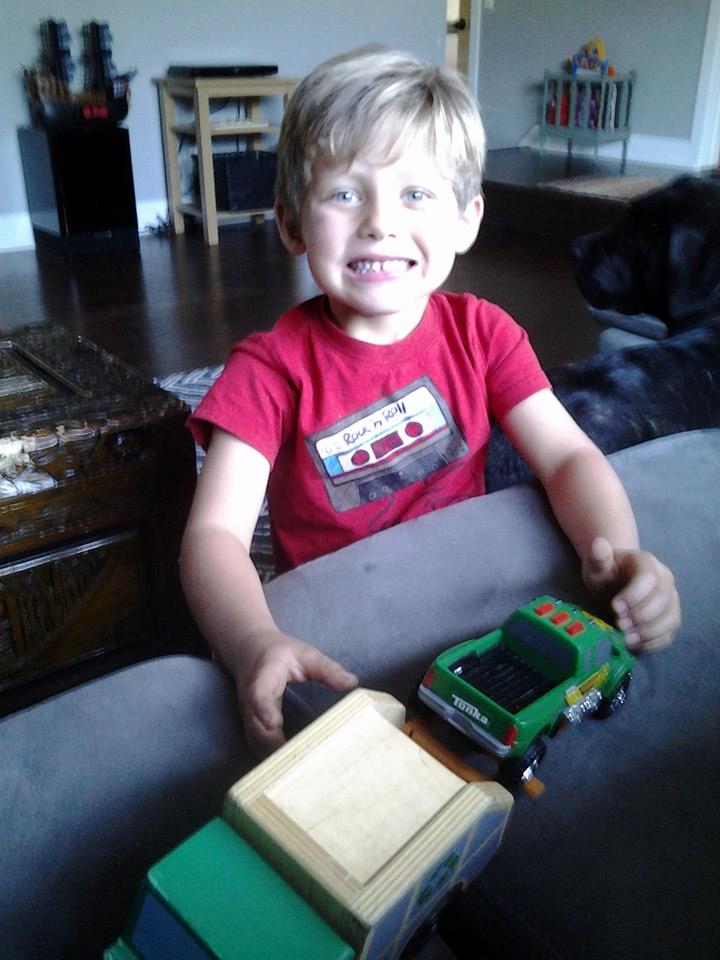 Van just repeated back to me, one of my most favorite and oft sayings...I created, " Don't put it down, Put it Away!" 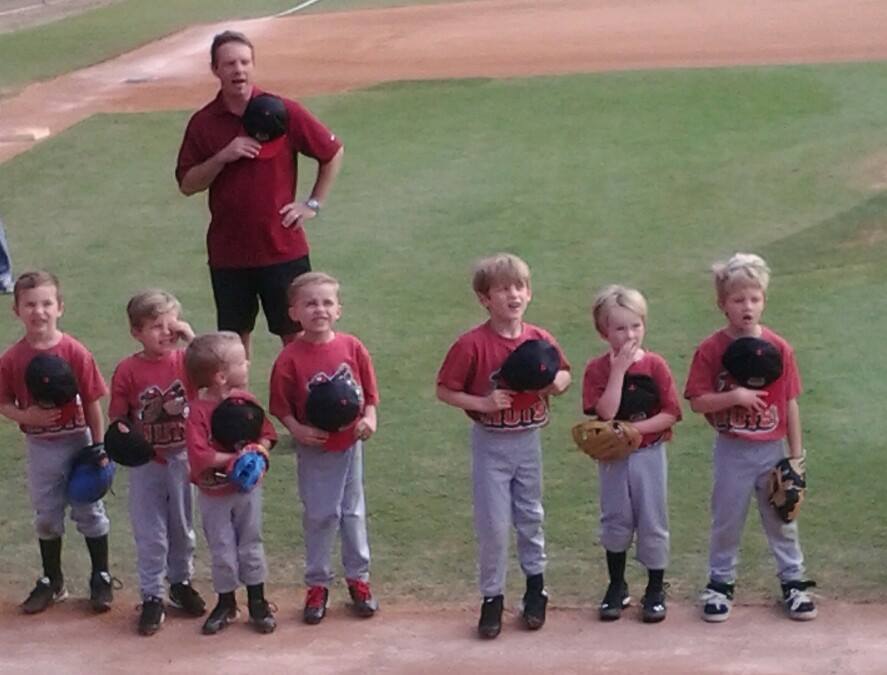 Reciting The Pledge before the Saturday T-Ball Game. 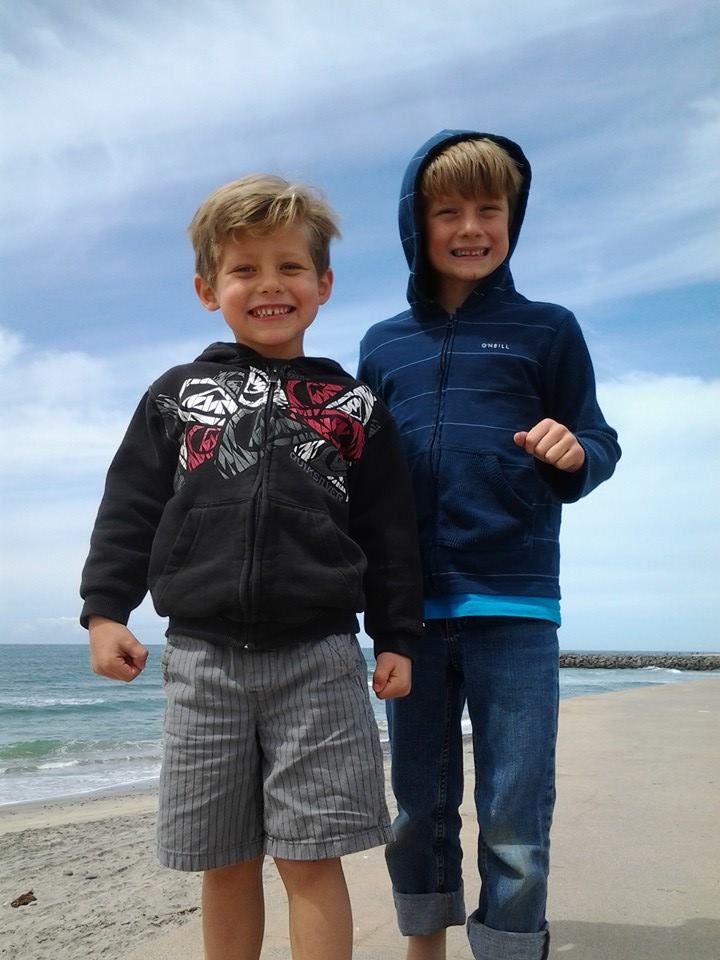