Holding History In My Hand

We can all look back to various events in our lives that helped shape our future.  What you see in my hand is a tangible piece of history that is part of a much larger object and story which set me on my life path at the tender young age of 7. 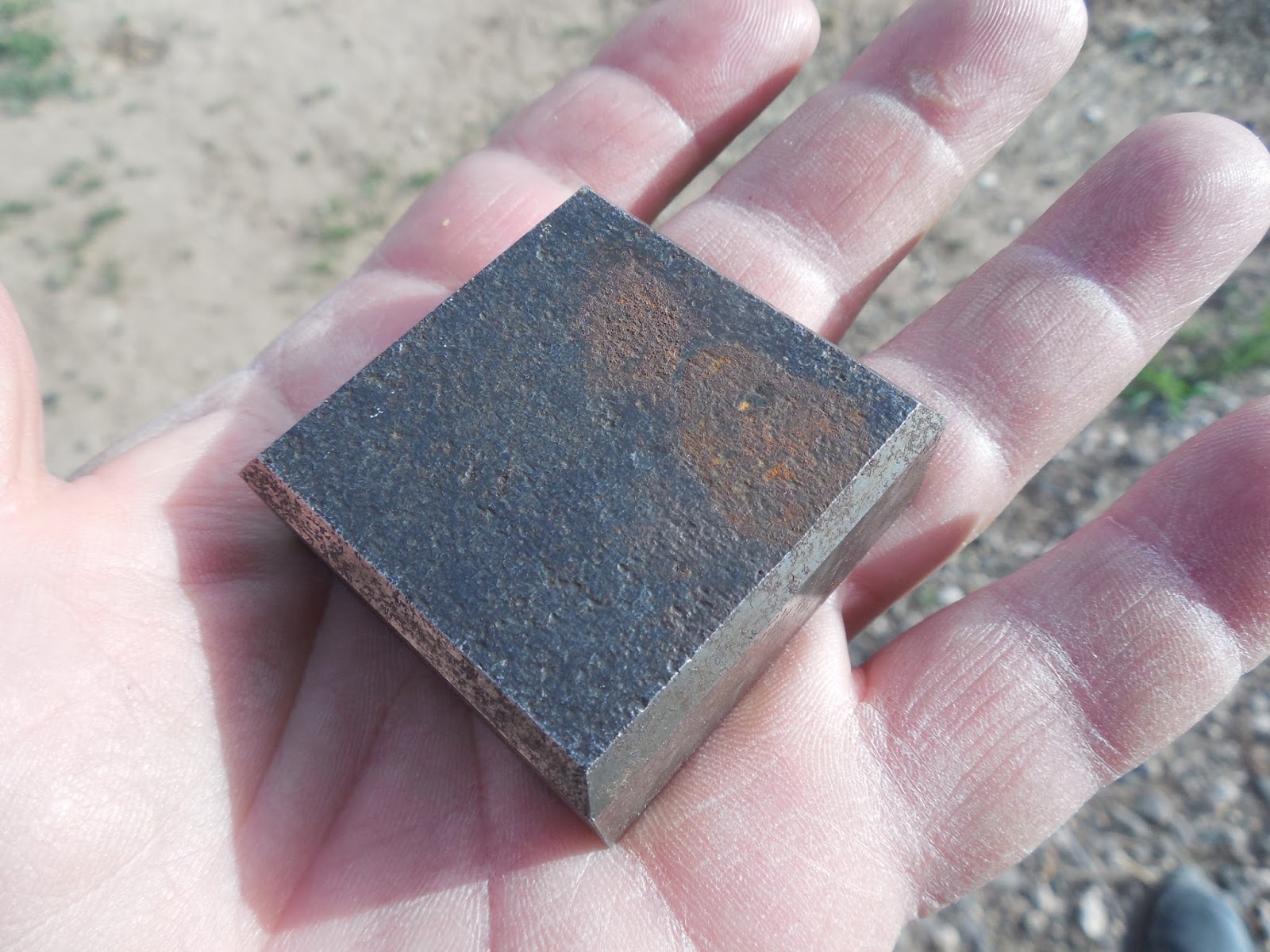 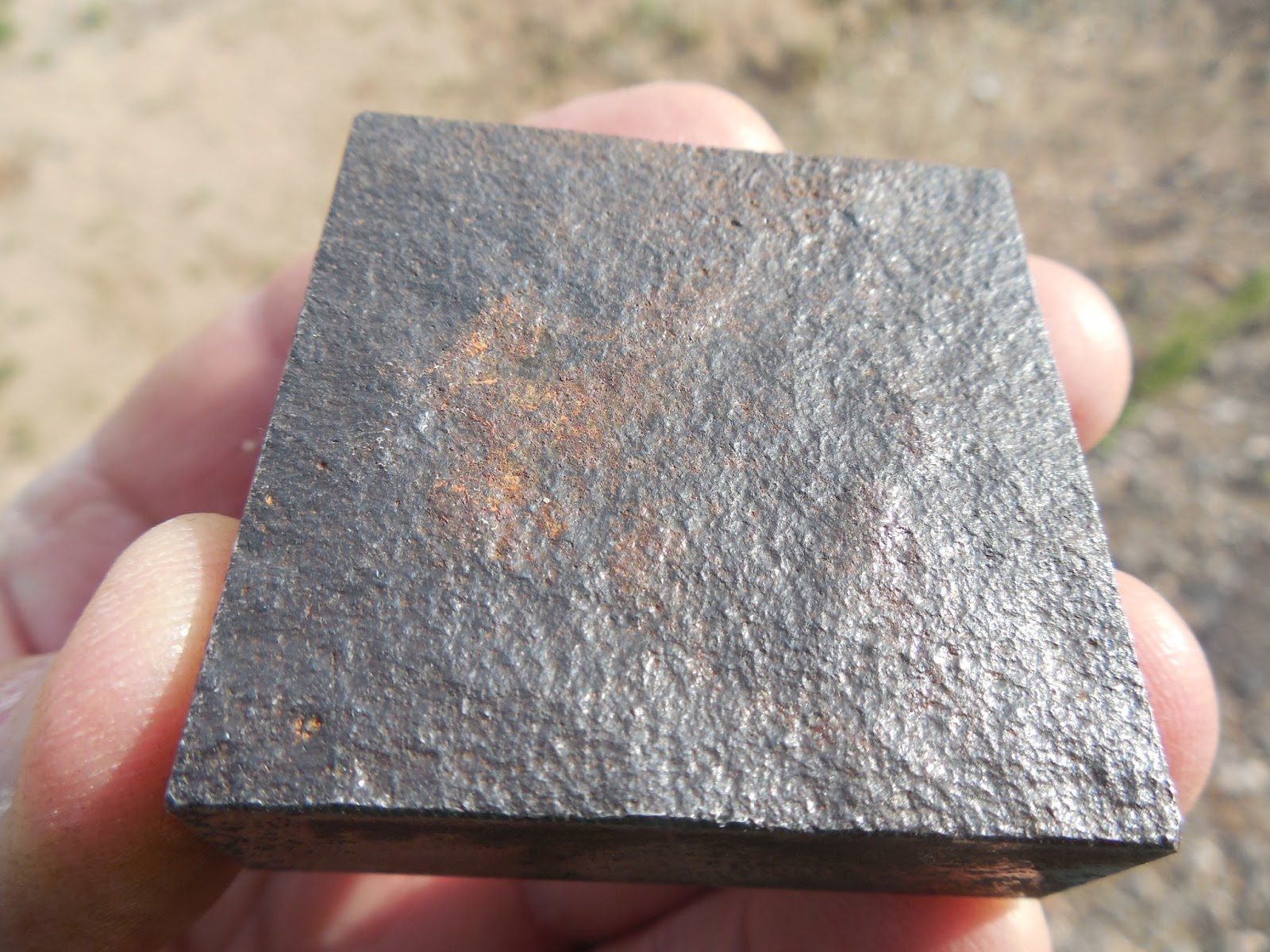 Both sides of this pure steel piece are rough finished.  However, only one edge begins to tell the tale. 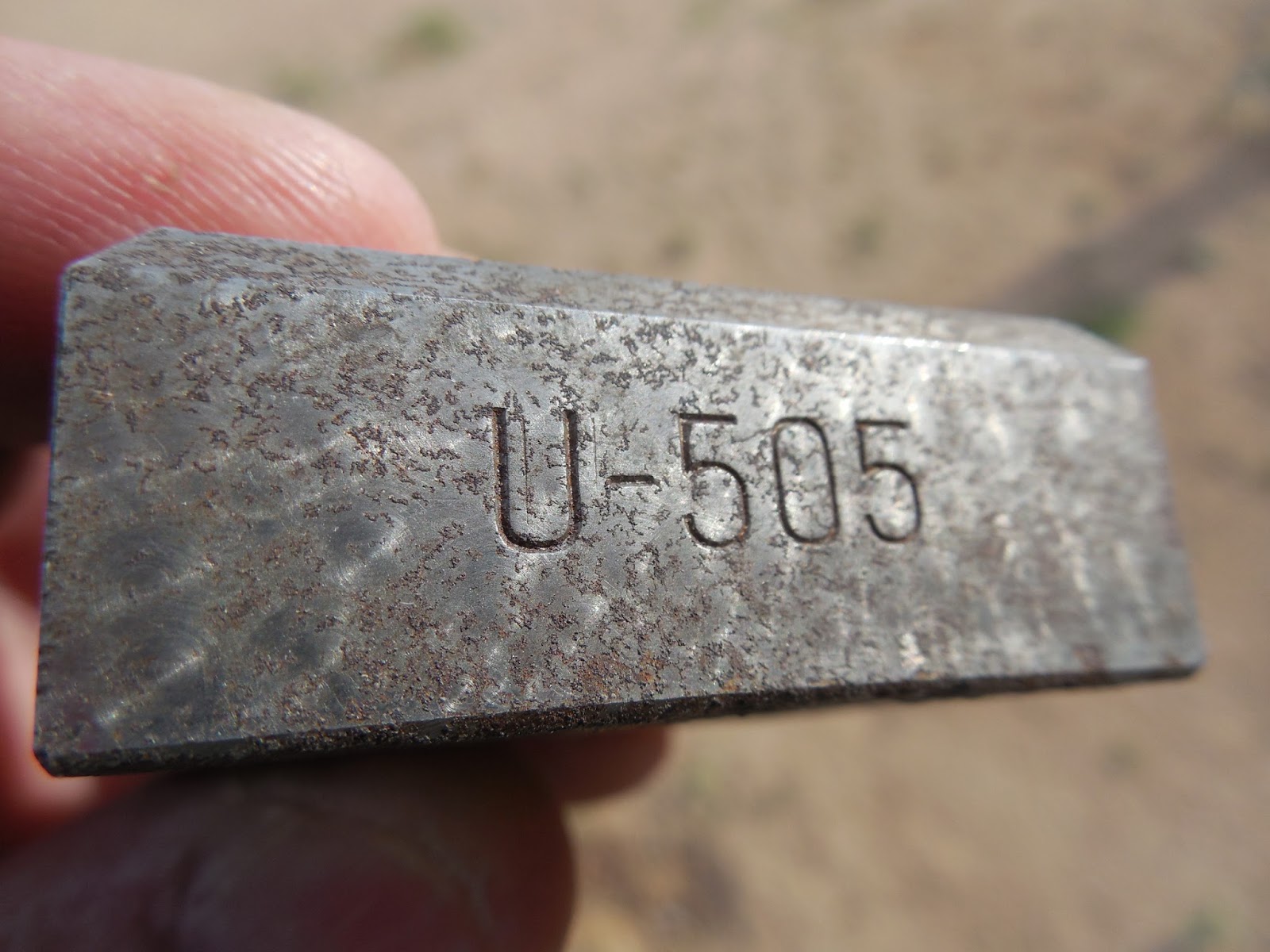 In a nutshell: the U-505 created in me the enduring love of history and journalism that shaped my Life's Path in far too many ways to describe in this short blog post.

My Mother taught me to read very, very early in life and by my sixth year, I was already "reading far above his age," as the nuns were wont to say.  My Mom was always looking for things to keep me occupied and she tried to get me to read the newspaper.  Well, early 1950's newspapers were about as boring as watching paint dry and contained nothing to interest a small child.

Until...The U-505 came along. Mom spotted the U-505 story unfolding in the daily newspaper and said, "Here, read this."  Well, I was hooked right then and there and read and re-read every word until I practically wore the ink off the newsprint.  Each day, I would wait eagerly for the next story about the U-505.

No, the story wasn't about the war-time exploits of the U-boat, the story was about how the U-boat was being towed up the St. Lawrence, across the Great Lakes and finally down Lake Michigan to Chicago.  When the U-505 finally arrived near Chicago, the news coverage ramped up to a nearly fever pitch.  Each day, there was a story about how they were making ready the U-505 for its final journey from the water to a resting place beside the towering, iconic Chicago Museum of Science and Industry (CMSI).

I soaked up every one of those stories to the point where I could excitedly recite back to Mom and Dad every little detail of what was happening each day.  There wasn't much happening during the summer of 1954 so this story was all the rage and the media simply couldn't get enough of it.

When the day came for the sub to be transferred to shore to begin it's journey across Lake Shore Drive on a set of giant rollers, a huge crowd gathered at the water's edge.  This was long before TV could do justice to such an unfolding story so the old-style, grainy news photos printed in the paper each day were all we had.

Long before the U-505 was hoisted into place beside the stately CMSI, I began bugging my parents to take me there.  I was incessant.  It was the biggest goal of my life at that time to be among the first to go inside that submarine.  CMSI Staff had to cut two big holes through the other skin and inner pressure hull of the boat so people could go in one end, walk through the sub and leave at the other end.

So, naturally, when the CMSI staff finally figured out how to get people safely in and out of the cramped vessel, off we went to Chicago so "Little Randy" could see "his submarine."  I will never forget running eagerly through the cavernous museum toward the submarine's entrance.

Lo and behold, just before the red-roped entryway, the CMSI had set up a temporary sales booth.  The had the large steel plates from the two holes in the hull cut down into little 1.75 x 1.75 pieces of steel, each carefully inscribed simply with "U-505."

Well, I flipped out when I saw those stacks of steel pieces and I just had to have one.  Naturally, the mementos were too expensive for my frugal parents.  Each one was $5 which in 1954 seemed like a small fortune, even to a 7 year old. But I begged and begged and maybe even cried a little, too, so my folks relented and paid The Big Bucks for my piece of the U-505.

I had it clutched in my little hand as I stepped aboard the submarine and carried it with me for my eventful first tour through the U-505.  If ever you have seen a child experiencing Disneyland for the first time, you can imagine that I was inside my own personal Disneyland that day.

Even though my folks had plenty of history to share such as Dad's WWII experience on the B-17 and in the prison camps and we lived in Tippecanoe County, Indiana, site of the famous Battle of Tippecanoe, none of that history was tangible for me.  I couldn't hold it in my hand.  I couldn't make the abstract connections to Indians and soldiers of 1811 or to my Dad's lumbering bomber.

But there in the U-505, I was holding history in my hand and I was walking through touching, fiddling and actually trying to play with history.  Back in 1954, they didn't put "Do Not Touch" signs on things.  Following the day-by-day story of how this submarine got to Chicago and then being aboard brought both history and journalism alive in my young heart.  It truly was a defining episode and a singular life experience which remains with me today and forever.

When I was dealing with my Mom's estate in early 2012, I found this artifact and brought it to Arizona and put it in my top desk drawer.  Things where such a blur back then I actually forgot I still had this little piece of history.  A few days ago, I was cleaning out the drawer and, POOF, there is was.

Oh, how the memories finally flooded back into my Spirit from that time in 1954 when I was mesmerized by the whole thing.  Naturally, I began researching the U-505 online.

Back in 1954, there was precious little to be known about the U-505.  Even the museum was ill-equipped to tell the submarine's story.  It was just a giant war trophy, a huge artifact that was essentially expected to speak for itself.  Today, of course, the entire story of the U-505 is available from multiple sources and perspectives.  In many ways, what I have learned in the past few days has been as equally exciting to me as those fond memories from 1954.

The full story of the U-505 has come alive in a fuller, richer and more touching way than I could have ever dreamed as a 7-year-old.  Last night about 11 pm, I finished reading Hans Goebeler's amazing book, "Steel Boat, Iron Hearts."  I found this book as my little piece of the U-505 rekindled my story.  Naturally, I ordered it immediately and started reading it right away.  I simply couldn't put it down.

And yet there is so, so very much more than this book.  Now, anyone can learn and know practically everything you can imagine about the U-505.  I have tried to organize some of this material in a coherent manner here but I doubt that I've done a very good job.  You will basically have to visit a lot of the links and learn more on your own, if indeed you perhaps share an interest in this arcane piece of history. 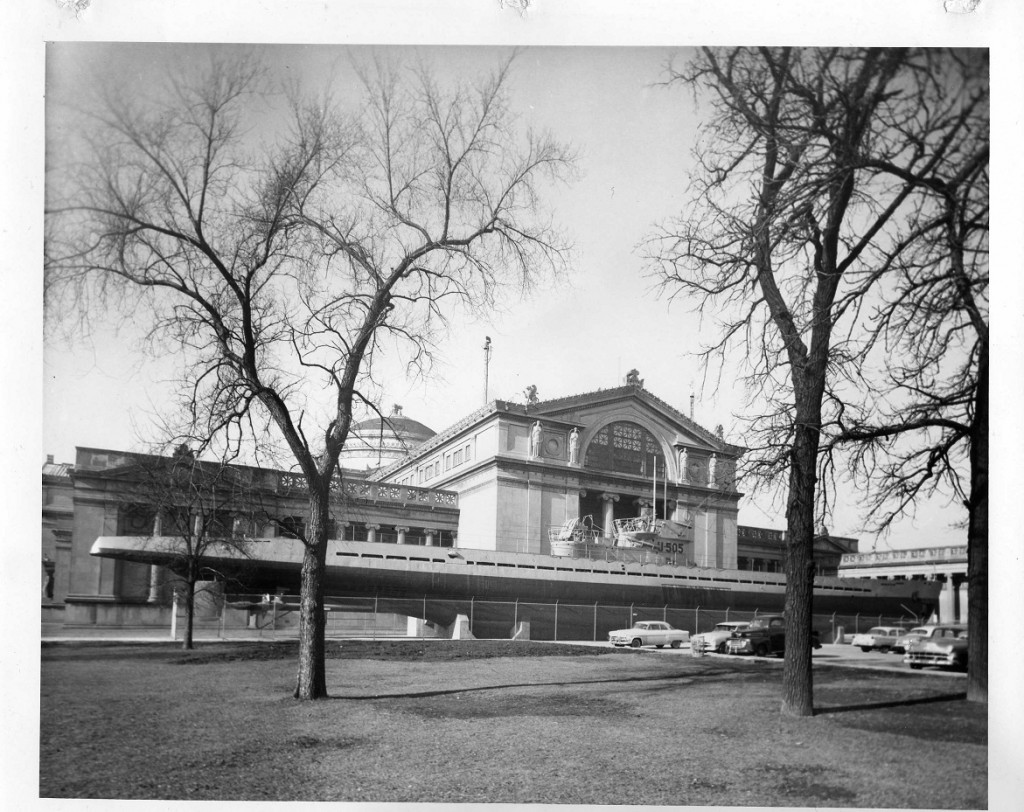 Above is the U-505 the way I first saw it in 1954.  It has since been moved into an underground area so it can be forever protected from the harsh Chicago elements. 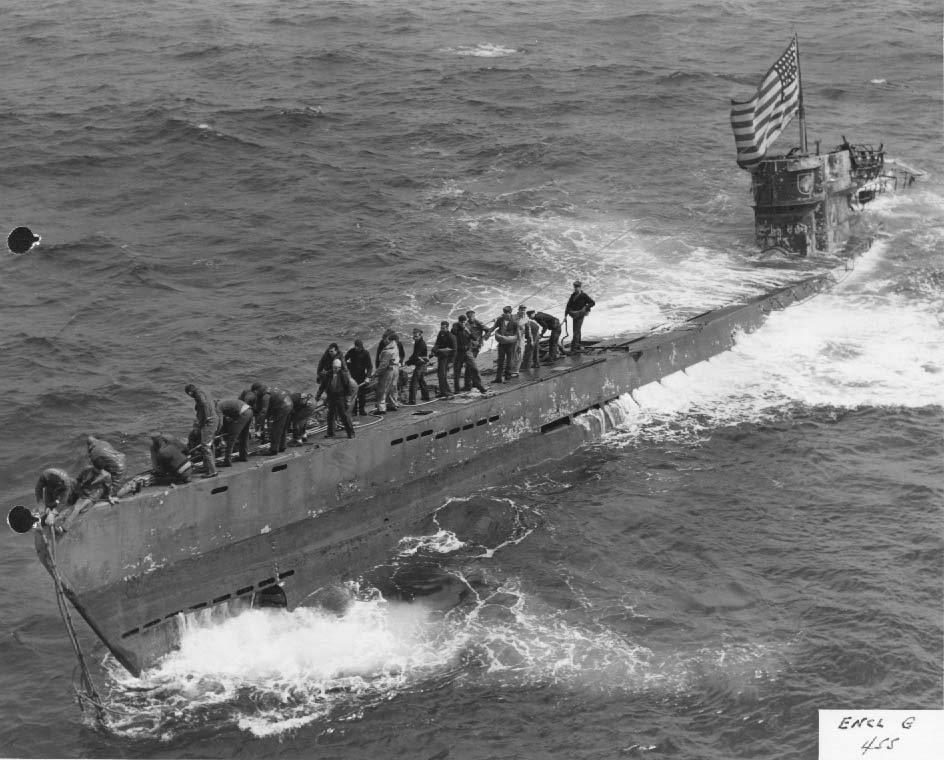 Here are some of the classic photos taken following the capture of the U-505. 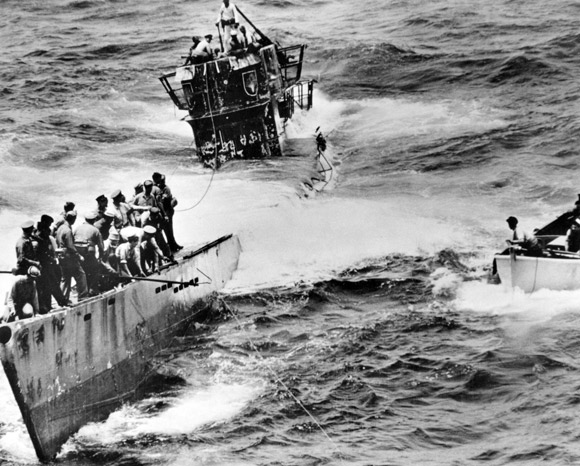 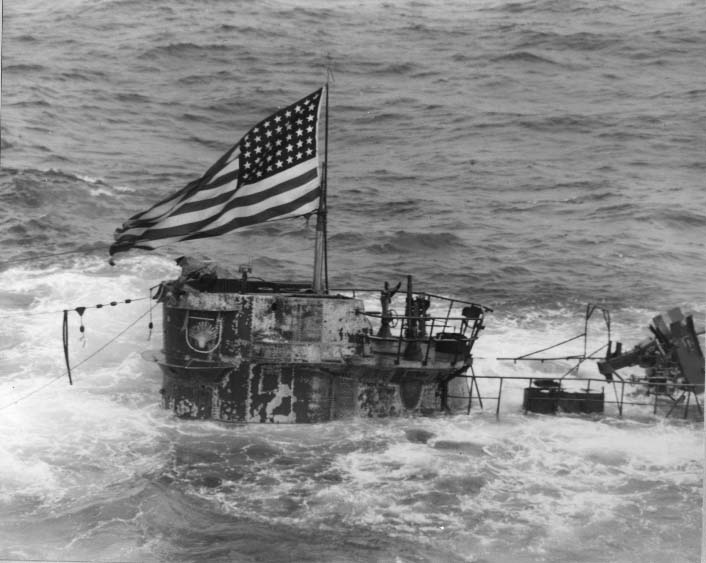 The U-505 was the first enemy vessel to have been captured on the high seas since the War of 1812! One of the boarding party was awarded the Medal of Honor for his role in the capture.

"The Task Group's brilliant achievement in disabling, capturing, and towing to a United States base a modern enemy man-of-war taken in combat on the high seas is a feat unprecedented in individual and group bravery, execution, and accomplishment in the Naval History of the United States."

Above are surely some of the same scenes I saw in the daily newspaper back in late summer of 1954.  The story of how the boat got to Chicago is quite interesting, actually.

By 1946, the Navy had extracted all the information and technology it needed from the U-505. With no reason to keep the sub, the Navy planned to use her for target practice. The story of the U-505 would have ended there were it not for Retired Admiral Daniel V. Gallery, the Museum of Science and Industry and the people of Chicago.
A Chicago native, Gallery was looking for a permanent home for the U-505 in his hometown. As luck would have it, the Museum had long been searching for a submarine for its collection. In 1953, Gallery and Museum President Lenox Lohr convinced Under Secretary of the Navy Charles S. Thomas to give the sub to the Museum. The only catch was that the Navy refused to cover the cost of the move. In response, the Museum, the City of Chicago and private groups banded together to raise the $250,000 that would be necessary to repair, move and install the sub for exhibition.

In 1946, however, Father John Gallery learned of this plan from his brother (then Admiral Daniel Gallery) and called the Chicago Museum of Science and Industry (MSI) President Lenox Lohr to see if MSI would have an interest in saving U-505. The museum, established by Chicago businessman Julius Rosenwald as a center for "industrial enlightenment" and public science education, specialized in interactive exhibits, not just view displays and artifacts. Lohr immediately revealed 10-year old plans to include a submarine in the exhibits of the museum and began a plan to bring the U-505 to Chicago.

We're running out of time today to do up these links "right & proper so will just put them all here and let you sort them out.  Thanks for reading my story!  Have a Great Day & Many Cheers, jp

And, FINALLY, the full real story!

Here is a description of the pressure hull of a U-boat.  Sure enough, my little piece of steel is precisely 18 millimeters thick!

My family visited the sub sometime in the 60's. Subs have always fascinated me. They are amazing machines. There is one here in San Francisco that I go through once in a while. Dave Ehmke

My family visited the sub sometime in the 60's. Subs have always fascinated me. They are amazing machines. There is one here in San Francisco that I go through once in a while. Dave Ehmke