Alright, let's get this Show On The Road for the last Sunday in February.  February ALWAYS goes by in a blink of a why.  Seems January and March are always long and somewhat tedious but, February?  POOF, Gone!  You wouldn't think a mere 2-3 days difference would make a month fly by...but it does.

Obviously, we've been remiss on Ye Ol' Morning Editions lately.  We need at least 2 hours to get a decent Morning Edition going.  We normally get up at 6 am and there's really no much happening until 8 am anyway, so why not roam the internet looking for "fun reads."  We really try hard to find stuff you won't see on CNN or any of the other major media.  Some mornings there simply no fun stuff to be had.  Some mornings we simply don't have the time.  That's how it goes here in the News Room at Second Chance Ranch.  Hum...maybe that's News Corner...or News Nook.

OK, we do have one real actual, honest, genuine legit NEWS FLASH!  Arizona's FINALLY gonna get wet!  Cue thunderous online cheers, applause, huzzahs, shouts of joy and various other expressions of amazement.  Yes, as surreal and incredible as it may seem to our dust-drenched readers, Real water from the sky is going to fall upon parched portions of arid Arizona sometimes within the next week.  It's all because of what we've dubbed The Big Bubba Storm out there in El Pacifico.  Ol' Big Bubba's got a great big belly full o' water and he's headin' our way.  YES! 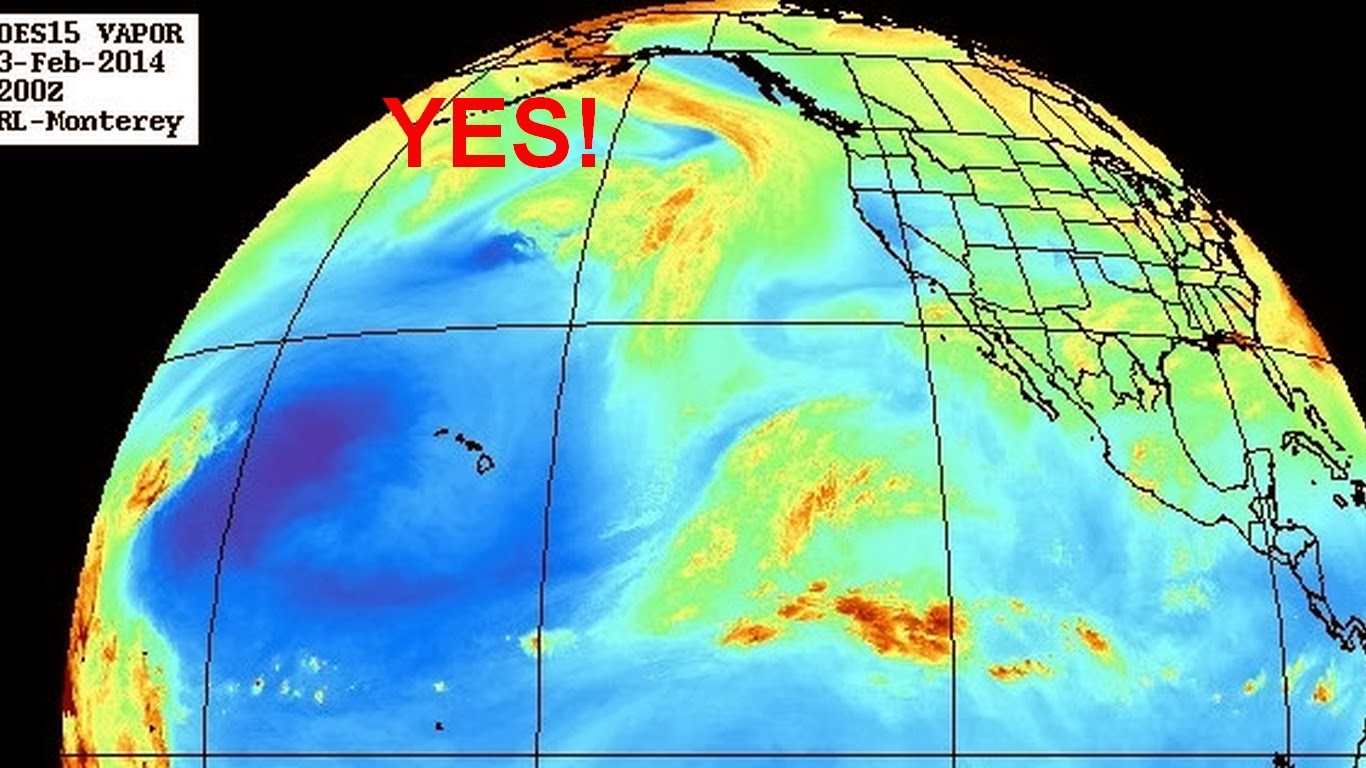 You can see Big Bubba above lurking out there in the ocean while deciding which State to molest the most.
Below is this morning's 7-day QPF and it leaves NO doubt that Arizona will pick up at least some table crumbs when Big Bubba comes to visit sometime between now and next Sunday.  Hey, we'll take whatever table crumbs the Weather Gods choose to give us.  It's so dry here, most folks have forgotten what real rain and snow are actually like.  They think dust is a way of life now.  WHA-WHOO!

We should actually note that we had a small bit part in causing this precipitation.  Yep, it's kinda the same as washing your car to create rain.  We've been working on getting ready for the February 28th Grand Canyon hike and, naturally, the hike will have to be cancelled to moved to a different date.  So, maybe the schedule of our hike played a wee small role in creating this welcome development!
OK, let's move on to donuts.  What a wonderful Sunday topic, eh?  We don't eat donuts ourselves but we like to look at them and read about them.  Whoever heard of Nacho Donuts?  You can see them in the lower left corner of the screen clip above.  WOW!

Well, here's how we got off on The Donut Tangent this morning.  We decided to visit The St. Louis Post-Dispatch, a venerable Midwest newspaper of some repute.  We hadn't visited the Post-Dispatch for many months.  Sure enough, we hit pay dirt as the newspaper trumpeted that THREE Saint Louis donut shops got featured in some New York gig on America's best donut shops.

Naturally, we were intrigued and followed our donut nose to the main article and then roamed some of the featured donut shops.  That's how we found Rebel Donut in Albuquerque and the Nacho Donuts.

As the New York gig notes, "So this list is not the 101 best shops, per se, or even the buzziest; it is instead a guide to the places and people that we think are doing their damnedest to pay proper respect to one of our country's greatest culinary traditions."

So, here's the Post-Dispatch article that got us started:

And here's the New York gig:

Peggy and Larry Ingram have really carved out a niche for themselves and their guests at The M Diamond Ranch here in the Sedona and Greater Beaver Creek area.  They are running both a great, traditional ranching operation while at the same time helping tourists enjoy unique experiences and learn about The Old West straight from the source.  Here's a major metro media article that includes The M Diamond.  The article appeared in Saturday's Phoenix newspaper.  We are very proud of The M Diamond and wish them Best of Success Always and All Ways! 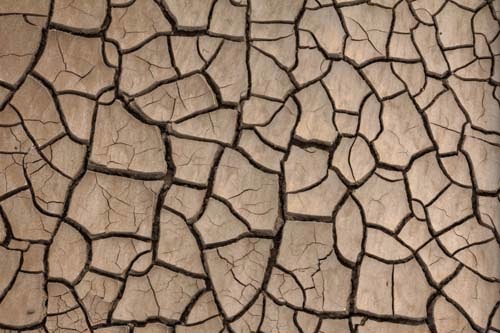 Not good news for some California farmers:

Meanwhile on the Forest Fire Front:

And here's the NYT article referenced in the above article: 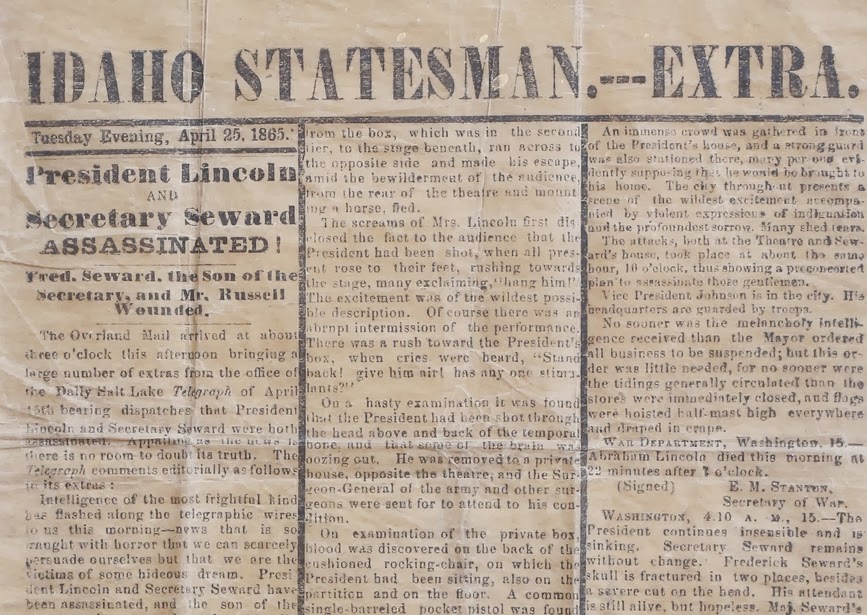 Hey, History Fans, this is a Great Story about finding and curating a long lost newspaper.

This summer, the Department of Defense will spend a day conducting experiments at the former Teton Dam site.
The department's Defense Threat Reduction Agency plans to conduct seismic experiments at the failed dam site near Newdale. The "routine scientific experiment" will consist of controlled underground explosions to gather data on seismic waves passing through volcanic rock. The experiment is being coordinated with the U.S. Bureau of Reclamation.
A date for the experiment has not been set.
The purpose of the exercise is to gather information to help identify and prevent detonation of weapons of mass destruction of all kinds, said agency spokesman Dan Gaffney in an email.
"Data collected from this experiment will be used to more accurately detect, identify and pinpoint underground explosions from across the planet," he said
In a news release, the Department of Defense refers to the planned detonation as a relatively small explosion comparable to 190 pounds of TNT. The experiment will be a one-time occurrence and is part of a series of experiments around the country through various types of rock, according to the news release.
After the explosion, the holes from the explosion and sensors will be filled.
Amy Verbeten of Friends of the Teton River said she reviewed the draft environmental assessment sent out by the agency and believes there is no substantial environmental threat.
Teton Mayor Phil Sutherin, however, sees a possible threat to the Snake River Plain Aquifer.
"My concern is that no one has been able to tell me it won't affect the aquifer," Sutherin said. "There were no tests on the effects on the aquifer. It's one of the largest in the world. ... To shake those volcanic rocks around, I think could affect our drinking water."
"There is no possibility of the test affecting the aquifer or any nearby wells," Gaffney said in response to Sutherin's concerns.
The news release announcing the project's draft environmental assessment said the experiment:
Will not affect the former dam site.
Will not affect wildlife in and around the area.
Will not affect the river or groundwater.
Will not pollute or contaminate the environment.
Will not affect any historical or cultural sites.
Will not impact the population, local towns, or structures.
The draft environmental assessment can be viewed online at tinyurl.com/PR-environmental-assessment.
Comments on the document can be emailed to tdts@dtra.mil or mailed to: Jeffrey Thomas, 1680 Texas St. SE, Bldg. 20363, Kirtland AFB, NM 87117-5669.
Reporter Aubrey Wieber can be reached at 542-6755.


It's not exactly the cover of Rolling Stone but Krysta's Surprise Flash Mob gig made the Cottonwood newspaper this week.

And, finally, for those of you who simply MUST knkow how many days, hours, minutes and seconds remain until Mardi Gras, here's your countdown clock from one of the event's websites: