Well, it looks like Frosty The Snow Man is finally making an appearance in Idaho.  This graphic comes from the Pocatello NWS office.  The forecast snow depth for the valleys is kinda mind-boggling, actually.  This kinda snow fall would be a game-changer for the precipitation paucity Idaho has experienced so far this winter. 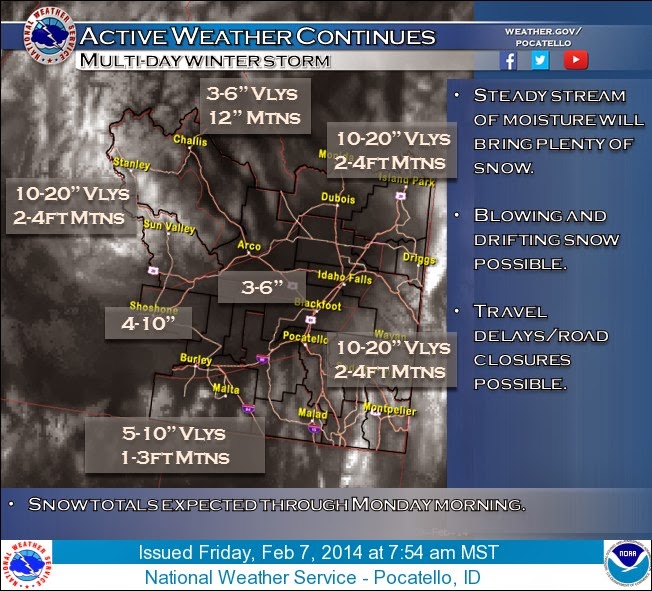 Below you can get a pretty good idea of the configuration of this "atmospheric river."  This graphic is from the US Navy.  The yellow and orange is water vapor.  The darker the color, the denser the amount of water in the atmosphere. 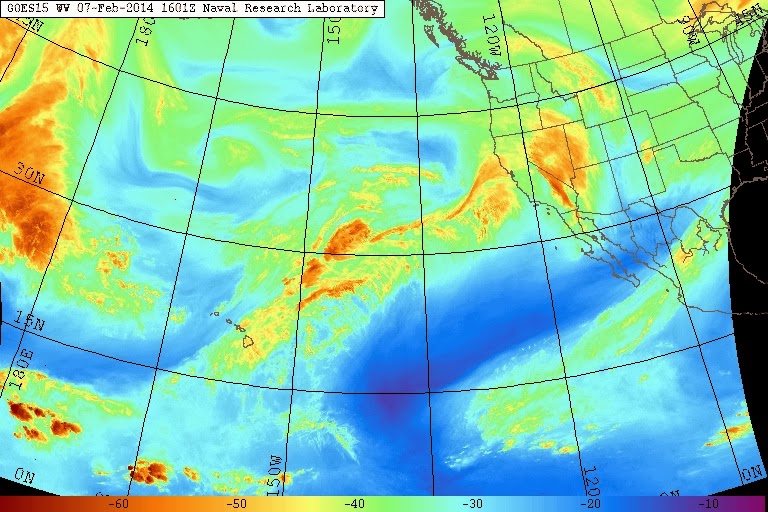 Below is the 72 hour QPF--this is an estimation of how much total precipitation will fall in any given area (cumulative) during the upcoming three days.  You can see the coastal areas are going to get gobsmacked by this atmospheric river.  Even though Idaho will be getting the "leftovers" of this feast, our share will still be substantial.

Even though there's an atmospheric river primed to hose the NORCAL Coast, such a big event wouldn't be possible without the Master Director--The Jetstream.  The jet is big and powerful right now and aiming right smack dab at the West Coast.  Note that the core of this jet near the coast is estimated to be blowing at 145 knots!  That's 166 miles per hour. That's about the speed of an average NASCAR race.

To get a better idea of the extent of this upcoming storm event, we present a snapshot from the US NWS National Warming mosaic.  The colored areas out in the ocean are gale warnings.  Most of that area is under a Winter Storm Warning.  The areas to either side are Winter Storm Watch advisories. 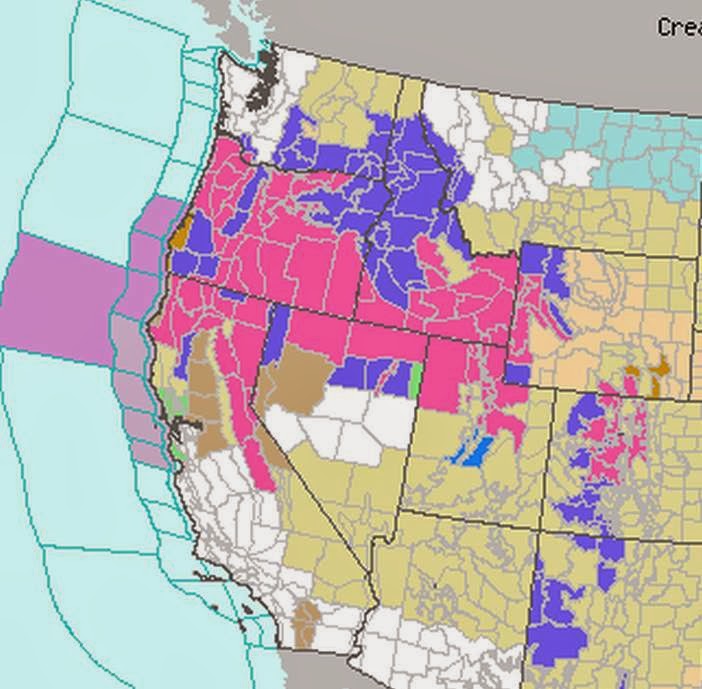 Over the next 48 hours the giant low pressure system in the Pacific is going to intensify and consolidate.  It's center will be located about 45 North and 165 West, roughly between Hawaii and the Aleutians.  This low will synergize the jetstream and the atmospheric river.  Taken together they are quite the Trifecta!

What does all this mean?  Well, in a nutshell, it's great for the Idaho watersheds, especially the Upper Snake River watershed upon which so many farmers (AKA: irrigators) are dependent.  It's awesome for the drought stricken areas of NORCAL.  Remember a few days ago we posted a story about an interfaith effort to "pray for rain."  Well, perhaps those prayers are being answered.  When you can get a few million people praying for the same thing together, interesting things can (and do) happen.  This storm may not necessarily be Divine Intervention but, trust me, a lot of people are going to say their prayers bore fruit.

Below is the most current assessment of the Salmon River watershed.  As you can see, the Middle Fork's watershed is the poverty-stricken stepchild of the Salmon System.  This storm could go a long way toward restoring the snowpack to something resembling its longer-term average.  Time will tell and we shall see. 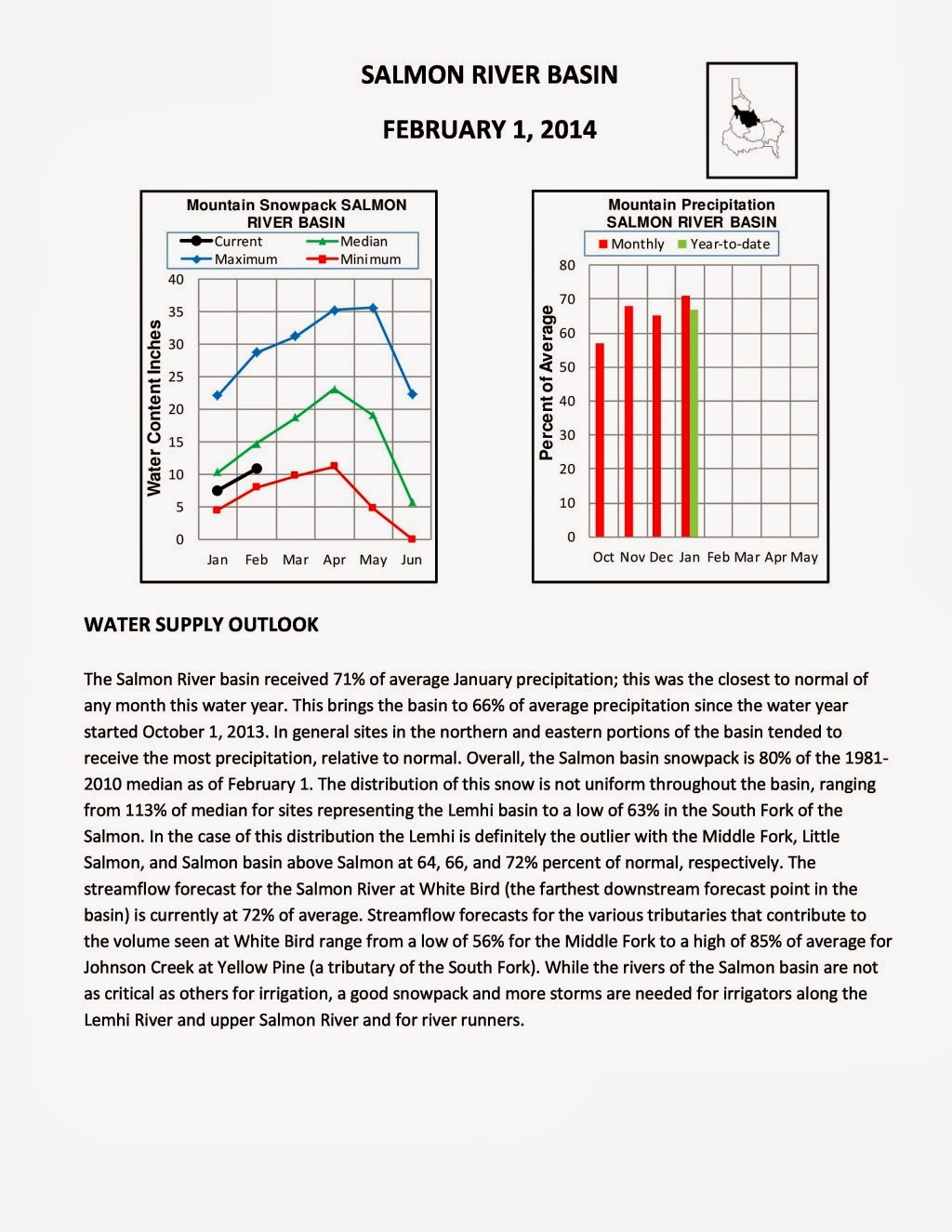 Good for the snow pack. And the temperatures will be above zero, all of which is a very, very good thing!