The Other John Parsons

Nah, I don't have a secret ego.  I just get email from all The Other John Parsons around the world.  You'd be amazed how many emails I get intended for guys with my name.  There's two in Australia, one in Wales, one in UK and many Americans whose addresses span coast-to-coast.

I get all sort of personal details, bills, tax statements, you name it.  In the Old Days, I simply deleted these emails but as the years passed I developed a "conscience" and have decided to do an "intervention" with each and every one of their emails.  It's been quite fun and I've interchanged a lot of followup emails with people who KNOW a John Parsons someplace.  However, NONE of the John Parsons have seen fit to thank me for helping them avoid tax delinquency or their golf clubs dues or whatever.

The reason I am putting up this blog post tonight is because this a SUCH A CLASSIC PHOTO!  One of the John Parsons lives in Australia and is a member of the Upper Crust Society there.  He's part of a polo club and you know how totally upper crust polo clubs are wont to be.  Anyway, over the years, this guy's polo club email has been pretty straight forward--until tonight.  I just got the photo an hour ago and it is definitely recent.  The guy at left is the John Parsons "Down Under."

You gotta love this photo, even if you suspect it probably caused life-changing injuries to the polo player shown.  Heck, they are Aussies, they can deal with it.  In the meantime I say, "This Bloke ain't no Bloody Bludger!" 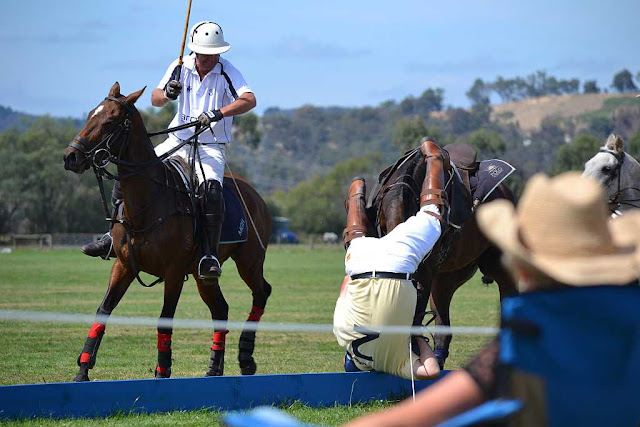