Lin had a fun whirlwind visit here.  Believe it or not, she left at 1:30 am in the morning today.  That's not a typo--that's 90 minutes after midnight.  She wanted to get through the Salt Lake construction mess before rush hour gridlocks the place.

Ironically, DF & AZ Neighbor Gary W. left his place near Montezuma Well at 3 am this morning heading our way.  He hopes to arrive between 8-9 pm tonight.  Whew, folks, that's a LOT of driving.  Lin is hopeing to get to Durango by dinner today.  Sounds kinda like a title for a country western song, "Durango By Dinner."  Who would sing it?  Probably George Strait.  Maybe Marty Robbins.  We digress.

Gary is on his way to yet another annual epic hike.  Thursday he and his hiking buddies go out on The Reclamation Road east of Ashton to a point near Grassy Lake.  There they saddle up their monster backpacks and take off south on the famous Teton Crest Trail.  In ten days they will reach civilization once again at Teton Pass between Moose and Victor.

Gary will be here long enough on the front end of the hike to shoot in tomorrow night IDPA pistol match.  He hopes to be able to stay a couple of days on the back end of the hike, too.  His hike is going to be pretty smoky.  The whole of this region is basically smoked out.  Ash is even dropping from the sky in Salmon, Idaho and visibility there yesterday was estimated at a mere half-mile.  They even cancelled afternoon high school football practice!  We can almost taste the smoke in the air here in Idaho Falls.

We moved here almost five years ago.  One of the reason we wanted out of Bowery was the ridiculous fire danger and smoke of the 2007 fire season.  Commentators are comparing this year to 2007.  Frankly, I think this year is worst that 2007.  It's been hotter than normal like forever here this year.

One of the many, many reasons we love Idaho Falls is that it has this enormous, vast and incredible firewall around the city.  Yep, it's those miles and miles of lush, green, irrigated fields of potatoes and alfalfa.  Even if a fire might get started in a field of barley stubble, it won't go anywhere.  It's a comforting feeling in a state that's essentially a sea of flammable material this summer.  Based on the weather forecast, there's no relief in sight until perhaps 30-45 days from now.

The fire we are covering intensively up in Salmon Country is a classic example of how fire is managed there these days.  The fire managers basically say "we hope you're happy with how we manage this fire" and then go on about their business of keeping the fire from molesting "high value assets" while letting it burn willy nilly elsewhere.  They admit the fire won't be contained until October 16th at noon, no less.  That doesn't mean they are psychics.  That's just code for "this fire will burn until it snows."

Naturally, we are heavily into the Salmon Thang.   Visitation to that website is incredible.  We cleared 6000 last Thursday evening and there's no doubt we will log the 7,000 page view sometime today.  It's amazing.  Meanwhile, our ranking in a Google search using "salmon river idaho" as the keywords had us up to #10 and on the first page of search results for a few days.  We've dropped back to #14 and are on the second page now but that's still most excellent and we are very happy.  The author of the Stanley, Idaho Facebook has twice given us credit as producing "the best online coverage of The Halstead Fire."  Considering we are up against some heavy-hitter print and electronic media, that's quite a compliment.  We actually went looking around online to see how our coverage compares and we have to admit the compliment was well placed.  It's no big deal really--there are 45 "large" fires burning in the west and the media's focus to spread too thin to really devote much coverage to any single fire. 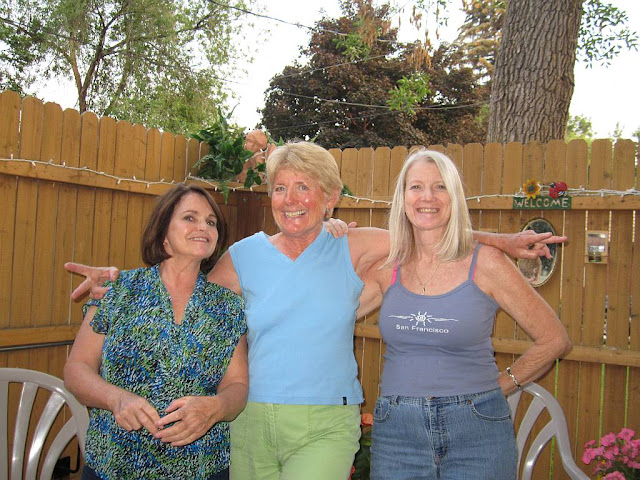 OK, enough fun.  Well, maybe some more fun.  Remember when we wrote the story on Robert Turner, the guy who got crushed by the tree on AUgust 5th, 2010?  Well, after we finished the story, we sent a note to PR Publisher Roger Plothow and suggested he let his Ace Reporter in Salmon, Idaho, Laura Zuckerman, do a story on Turner.  We never heard a word from Roger in reply and figured the idea hit the round file.  Much to our surprise this morning there was Robert Turner in all his bib overall glory sitting on the stump in a great story by Laura.  WOW, what a way to wake up today.  Here's a photo of the way the story was laid out on Page B1 of this morning's newspaper. We will get the full story posted a little later.  Another note below photo. 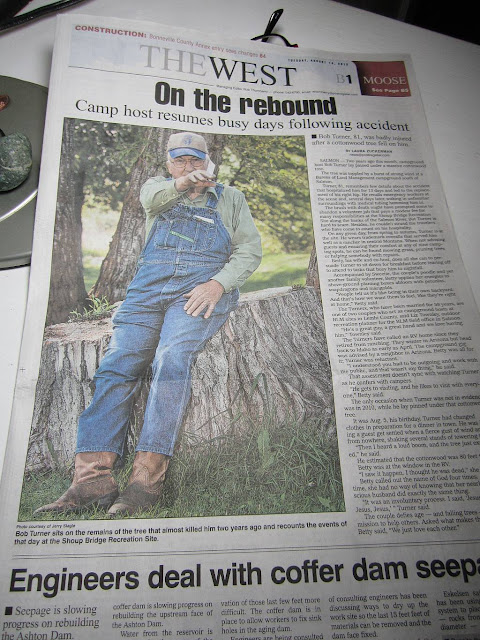 We just rec'd phone calls--Lin is almost in Cortez, Colorado and Gary is in Panguitch, Utah.