DR & LBR Terry M. read the blog post below and was struck by the fact it couldn't possibly be George Strait or Marty Robbins who would croon the tune.  Nope, as Terry said, "I think it would have been an appropriate song by John Denver. Of course it would be from the album entitled; "Denver Does Durango by Dinner."  The album cover is Denver, playing his guitar while sitting on a giant slab of steak perched on a mountain side."

Terry, that gave us the Best Laugh possible and we both really needed a laugh like that.  Bless You & THANK YOU!  John & Susun. 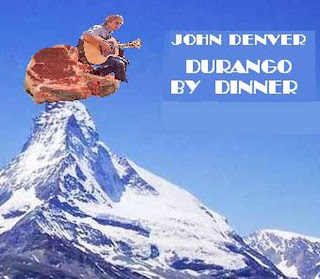 I was able to locate the John Denver “Durago by Dinner” album during a search of e-
bay. It seems it was written when John was first starting his career and was the result of
his Rocky Mountain high.

Here’s the info from Wikipedia:

“Durango by Dinner” was actually the name of a theme tourist train that ran from
Silver City to Durango during the late 1950s.

Passengers would board the train in Silver City and actors and singers, dressed in
appropriate 1800 era costumes would recreate the wild mining days of the area roaming
the cars of the steam driven train singing the song and getting passengers in the mood.
The chorus line was repeated often and all aboard were urged to raise their beer glasses
as it started and empty them by the time the chorus ended.

Denver would walk up and down the aisle during the stanzes replacing the empty mugs
with full ones and urging another chorus of the song. Needless to say by the end of
the trip the passengers were pretty drunk and ready to enjoy dinner which was actually
served in an old railroad car at the Durango Depot. Passengers got to keep the mugs as a
souvenier and a prize was given for the person who had the most mugs at the end of the
trip.

Denver spent two summers performing on the train before making the song the title
song of his first album.

“Durango by Dinner” although popular on the train, never made the top 20 list and
was overshadowed by another tune Denver created while sitting in a box car during his
breaks and lamenting his homesickness.

Originally called “A Real Trip”, it was retitled ‘Rocky Mountain High” and became
his first gold record. “Rocky Mountain High" is primarily inspired by John Denver's move to Aspen,
Colorado, and his love for the state. The seventh stanza makes a reference to destruction
of the mountains' beauty by commercial tourism.

The song briefly became controversial in 1972 when the U.S. Federal
Communications Commission was permitted by a legal ruling to censor music deemed
to promote drug abuse. Numerous radio stations cautiously banned the song until Denver
publicly explained that the "high" was his innocent description of the sense of peace he
found in the Rockies. Few believed him.

In 2005, the song was performed by a soloist at the NBA all-star game in Denver.
After years as an unofficial anthem for Colorado, on March 12, 2007, the Colorado
General Assembly made "Rocky Mountain High" one of two official state songs,
sharing the honor with "Where the Columbines Grow".The song was also used in an
advertisement for Colorado-based Coors beer which Denver had served on the train. 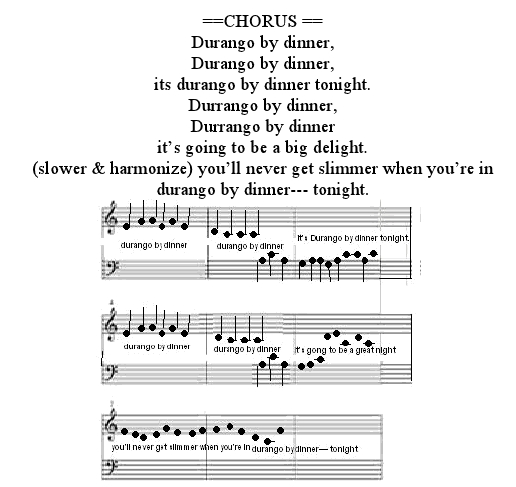