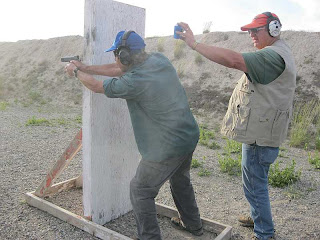 Our shooting is shot for this year and probably next year, too, as we explain in this blog post.

Yesterday was the first Wednesday IDPA pistol match of the 2012 season.  Preparing for the match occupied most of the day and we didn't return home until nearly 9 pm.  It was great fun, of course.  We enjoyed seeing all the friends we made last year.  Participating this year was night and day from last year.  We really had no clue what to do or what we were getting ourselves into last year.  We didn't know a soul there and the whole thing was very daunting.  This year lots of people greeted me by name and welcomed me back.  People said things like "We sure missed you, John."  We did a lot better at shooting, of course, because of all the practice we had in Arizona.  Last year we shot in 13 straight weekly matches without missing a one.  This year it's going to be total opposite.  We're going to be lucky if we get to shoot in one or two a month.  The photo show two of my many mentors. Bill S. is shooting the final of five stages.  Bill has taught me so much I couldn't even begin to list all his lessons.  George H. is the Safety Officer holding the shot timer.  George likewise has helped me learn so much and given me several great gifts.  It was really fun hanging out with my Idaho shooting buddies and I sure wish I could do it more often this summer.

The flip side of not being able to shoot much is that we are going to have an awesome and wonderful time with our friends this summer so I really won't miss shooting at all.  Here's how the schedule shakes out.

We have a lot of stuff to finalize by Sunday night.  Monday morning, Marsha & Phyllis fly in about 9 am.  Thus begins our whirlwind.  Or should that be girlwind?  The Two Wise Women fly out Friday on the same plane which delivers Joshua June 15.  When we take Josh to the airport June 29, he gets on the same plane that delivers Kate and Brock!  K&B will be here for a few days before they rent a car and drive to Helena.  The day they leave, Wes & Nancy arrived from Seattle to spend a few days with us to celebrate the July 4th holiday.  When Wes & Nancy leave, Kate & Brock get back from Helena for another few days before they fly back to Arizona.  That puts us out to roughly July 10th.  So, who cares about shooting this summer.  We're busy making memories with our Dear Friends!

Last night after we arrived back from the shooting range we were (as usual) too wound up to go straight to sleep so we stayed up until well past 11 pm drafting ideas for the Salmon River thing.  That's when it dawned on our feeble brain that the Salmon River thing is kind of analogous to a life experience from a chapter of our past that's 40 years old here in 2012.

Forty years ago at this time, we were the Managing Editor for "The Zionsville Times" newspaper in Zionsville, Indiana.  I thought we told that story last August but I can't find it in the archives.  We'll tell it later--it's a long one.  Anyway, lots of memories came flooding back last night.

Then by coincidence we starting thinking of anniversaries and realized that next year will be the 30th anniversary of our famous Colorado River trip in 1983.  Out of the blue we decided to start promoting a 30-year anniversary trip.  We emailed Nancy McC (AKA: Nemac) and she was all over the idea instantly.  Barring unforeseen developments, that trip down memory lane will take place a little more than a year from now so it's highly unlikely we will be doing much shooting next year either.

So that's how we arrived at the title for this blog post.  Our shooting is shot.  Funny how things work out like that.

Have a great day & Many Cheers,jp
Posted by John Parsons at 8:31 AM

Well, as it stands now the soonest I can make a visit with you two is sometime later in July. I'll check in after the big Ditch trip when I return from hot Airy Zona July 6 or 7.
I think you are having too much fun.