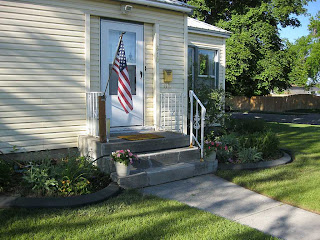 How 'bout that for a blog post title, eh?  What's it mean?  Simple.  Susun's been up to her eyeballs laying sod while Little Yonni's been messing around with QR codes.  Both of us have spent umpteen hours in our respective tangents over the last couple of days.  Susun's work has been entirely physical while Yonni's has been entirely mental.  While Susun has been on her knees doing the backbreaking work of fitting sod into tight places, Yonni's been glued to the computer screen wearing out his fingertips and synapses.  It's been an interesting juxtaposition.

So, whazzup with sod?  Well, a couple of years ago we thought it would be a nice idea to get landscape curbing put in around the front of the house.  We've even had guys come and give estimates but, for one reason or another, nothing ever happened with the idea.  Last year, we found a nice guy who gave a good quote and he was still interested in the job this year.  It took about a month for it to all come together.  A crew of maybe 6  people showed up one day and BAM, the curbing done in less than an hour for under $200.  The trouble was that Miss Susun decided to reduce the size of the beds beside the house so the new curbing left some really ugly areas.  Well, you know that simply can't be tolerated!  So, Miss Susun set about rectifying the situation immediately.  She probably put in 15 hours on the project, including 8 hours yesterday alone.  It only took four rolls of sod but the prep work and the fitting and all the little details really added up timewise.  She worked incredibly hard on this project and, naturally, it looks beautiful in every way.  WAY TO GO, Sweetie!

Meanwhile, along about the same time we got interested in landscape curbing--two years ago--we also took a hankering to QR codes.  We proposed the idea that Idaho Falls Parks & Recreation use the QR codes to promote various aspects of the department's many features and functions.  Nothing came of the idea.  However, DF & LBR Terry M took an interest in them as well and we swapped interesting tidbits from time-to-time.  Meanwhile, the P&R Department has a brand new Director all the way from Pennsylvania.  He's a bright-eyed, bushy-tailed kinda guy and he knew all about QR codes and professed to actually like them, too.  So, we jumped right on it and had an item put on Monday's monthly meeting agenda.  Sure enough, the P&R Commission decided to let Terry and I run amok with QR codes.  Along about Tuesday this week we realized if we didn't get something rolling by Friday it probably wouldn't happen until mid-July. Soooo...that left zero wiggle room for procrastination.  It meant we had to drop everything else and devote as much time as necessary to get a meaningful QR code project up and running. 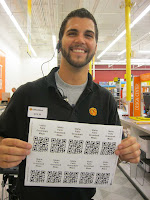 In the photo at right with this narrative, you see who was actually responsible for the QR code project actually getting done--Kolbi B at Office Max.  The young man took a personal interest in the project yesterday.  Although Office Max charges $66 an hour for design assistance, Kolbi spent over an hour helping with the design process and charged us $2.20!  As you can see, he had fun with it, too.  THANKS, Kolbi!

Wouldn't you know we finished our QR code project almost to the same exact hour that Miss Susun finished her sod project and spent just about the same amount of time on our project as she did on hers.  Funny how that works out sometimes.

Anyway, the QR codes are now basking in the sun and moon light down along the Greenbelt.  The code links to the greenbelt maps.  Terry is going to be tracking their usage this summer.  Without Terry's genius ideas, the whole QR thing would have already flopped.  THANKS, Terry! Neither of us have any benchmark with which to form expectations about this project so it's a learning experience for both of us.

Meanwhile, Miss Susun is exhausted today and moving very slowly.  She really went above & beyond to get that sod project finished.