Our Salmon River thing is doing really well.  Seems like every day something fun happens.  The daily hit parade keeps on rolling and we never seem to be at a loss for something to write about.  Meanwhile, the companion Facebook and Twitter accounts are proving to be truly valuable.  The website (blog) and the social media accounts all fit together like, well....yes, that hand-in-glove thing.

There's a cool little website in Salmon City called "Lemhi Web."  Basically, the weekly newspaper up there is truly deficient in serving the community well.  So a trio of women decided to create their own news source.  Granted, that's a tall order but somehow they have managed to survive, if not prosper.  You'd have to know a little bit about Salmon City to understand the "who, what, where, why, when and how" of that backstory. You can click here to read a wee bit more about Lemhi Web.

We hit it right off with the owner of Lemhi Web.  One thing led to another and we proposed to swap ads with each other.  In the Old Days, that was called "back scratching" as in "I'll scratch your back if you scratch mine."  Sure enough, Lemhi Web came through first and made a logo for us and put a real nice comment right smack on their front page.  We were humbled beyond description as well as delighted beyond words.  So, we clipped a snip from their front page banner and returned the favor.  That logo sure would make a nice bumper sticker!

Meanwhile, the exposure we've received from being front and center on Lemhi Web's gateway page has really bumped up our page views.  Yesterday we logged 120 page views, the second highest yet since this effort began 2.5 weeks ago.  (Narrative continues below screen shots.) 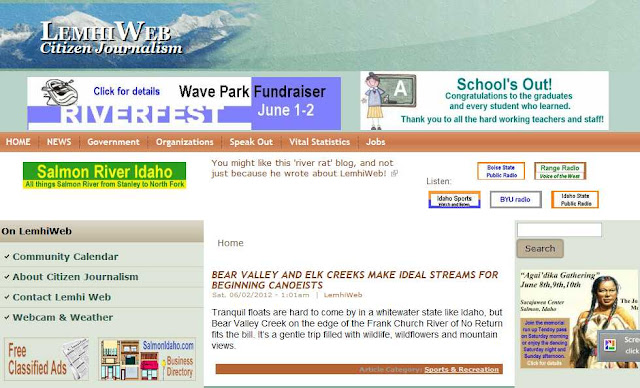 And how about that great paddle rafting photo on our front page?  Where the heck did it come from?  That's the beauty of Facebook.  Some of you LBRs know I have a very low opinion of Facebook and have been loathe to use it since the dawn of time.  Susun meanwhile think's it's the cat's meow and dotes on her Friends and Likes and the fine photos and videos of Grand Sons and Daughters and their social circles.

When we started the Salmon River thing, we knew we really had no choice.  We also had to start a Facebook and Twitter.  That's just the way it's done.  Even the stodgy City of Idaho Falls finally found Facebook just this week. (Imagine that!)  Somehow a couple of licensed Salmon River outfitters found and "friended" us.  One of those outfitters posted 18 great rafting photos in his Facebook yesterday.  Well, what the heck?  We "messaged" him via Facebook and asked permission to use the photos.  One thing led to another and, BAM, the great pictures from just yesterday are sitting on our Salmon River thing.

Without Facebook, we would have never ever known those photos existed.  Meanwhile, the Twitter account continues to turn up all sorts of interesting stuff.  That's how we found the awesome Lochsa video that's currently sitting on our Facebook whatcha-ma-call-it.  This morning, we changed our Facebook ID to be congruent with everything else we are doing.  It's new address is:

You don't have eto have a Facebook account to see that Lochsa video.  You can find it on our Twitter.  Just click the link at left and peruse the various Tweets there--you will see a Tweet that came via YouTube--that's it.  Life is Good with the Salmon River thing.  We are Happy Campers.