January First Greetings to One and All DFs, LBRs and Esteemed Visitors!  May your day be filled with much Holiday Cheer and may your upcoming year be a Joy & Success in every way!  Here on The Banks of The Wabash, Mother Nature is blowing in the New Year with much gusto.  Winds are blowing a steady mid-20's with gusts so far up to 46 mph.  Meanwhile, the sky is spitting those little pseudo rain drops for which the Heartland is famous.  Just another cheery gray Indiana day!

Well, we promised you a fun story and so here it is.  First, we must digress, backtrack and meander.  (Typical, huh?)  Many of you know about the Legendary Bicycle Karma Story.  It began November 20, 2007, when DR & LBR Mike V. gifted me with a fabulous mountain bicycle at Freeman Park in Idaho Falls.  I was ready to pay him $50 for the bike and he coyly asked, "Have you ever heard of bicycle karma?"  Well, I wasn't sure I had ever heard of bicycle karma.  So Mike said, "Well, I need some bicycle karma so this bike is yours--take it home and enjoy."  He wouldn't take a dime for the bike.  Thus began a story that evolved much farther and further in the days, weeks, months and years ahead.  Mike and his Family and we are Dear Friends and will remain so forever.

Naturally, she sent photos of the bicycle to us and told us how much she was enjoying her daily bicycle rides around the neighborhood and along the many winding bike paths of the city.  We certainly imagine she actually took all those bike rides in the fertile imagination of her mind.  However, in reality, the new Schwinn sat totally unused in her garage, never to be ridden even once.  Mom's bad knees would have made it impossible to pedal a bicycle.  Nevertheless, the purchase of the bicycle was a very wonderful thing for her self-esteem and she talked often of her delight in having taken those wonderful rides on her new bike--one she had wanted her whole life.

OK, fast forward to my first visit to her vacant home shortly after my arrival here.  When the garage door lifted the veil on her rubbish-filled garage, there the bicycle say like a gleaming gem amid the rubble of her life.  Oh, how shiny it was.  I had to smile at the mere sight of it.

Well, meanwhile, my Angel Lynn S. appeared out of nowhere at Mom's front door.  I had just met with the Funeral Director and the Director told me I had to find a photo of my Mom within 60 minutes.  I was inside the house with respirator, tyvek suit, the whole nine yards and Lynn knocked at the door.  So that was his first sight of me, Mister Haz Mat answering the door, looking for all the world like a clone of the Michelin Man and the Pillsbury Dough Boy combined.  Lynn and I hit it right off.  He took one look at the overwhelming mess in the garage and declared he was going to help me clean it up and pressure wash it, too.  He spied the bicycle and declared he wanted to buy it for his wife's Christmas gift.  I said nothing.

Meanwhile, Lynn came right back the next day, ready to rock and roll on the garage.  He started out by fixing her bent door--a door which I believed was beyond salvage.  He did it cheerfully and as easily as merely shaking my hand.  He had that "let's git 'em dun" attitude that's priceless in times of chaos such as I faced then.

Lynn kept looking at that bicycle and I could tell he really wanted it.  Finally, he said, "John, I really want to buy that bicycle."  So, I took the bike outside and we talked about bicycles while he held it and looked it over.  And that's when I said, "Well, Lynn, have you ever heard of bicycle karma?"  Well, Lynn hadn't heard of bicycle karma so I said, "Well, Lynn I need some bicycle karma so this bike is yours, free, no charge." Oh, you should have seen his face and his eyes.  He couldn't believe what he was hearing.  And he kept saying, "Are you sure, John?"  Well, yeah, I'm sure Lynn.  Put the bike in your truck and have a Merry Christmas!

Lynn (and my other Angel Doug) turned out to be Great Gifts from Heaven.  Without their miracle work, there is no way on this earth I could have coped with what had to be done inside Mom's house.  There are no words that can possibly describe how far beyond the beyond Lynn and Doug went to remediate and stabilize the haz-mat situation inside Mom's house.  There's was a true Christmas miracle beyond compare and without peer.

A few days ago, Lynn suggested he, me and his wife Suzanne go out to dinner on New Year's Eve.  Of course, I said I was buying.  After dinner at a local steak house, we went back to their beautiful country home and Lynn proudly showed me all of the incredible vintage gas pumps he has lovingly restores.  He is nationally known for his gas pump restoration and has sold over 100 of them,  His basement is filled with the most incredibly beautiful gas pumps you have ever seen or imagined could exist.  Off in a corner of the basement sits a vintage Schwinn bicycle.  I asked Lynn, "What's the story on the bike."  (Lynn told me earlier that everything he owned had a story.)  Well, it turns out Lynn's Schwinn was a Christmas gift when he was 10 years old.  It was his first bike.  My Mom's Schwinn is the perfect color match for Lynn's boyhood Schwinn and now Lynn and Suzanna will be able to ride together along the blissful paths of life together on color-matched Schwinn bicycles.  And so it goes with Bicycle Karma.

Mom would be very proud. 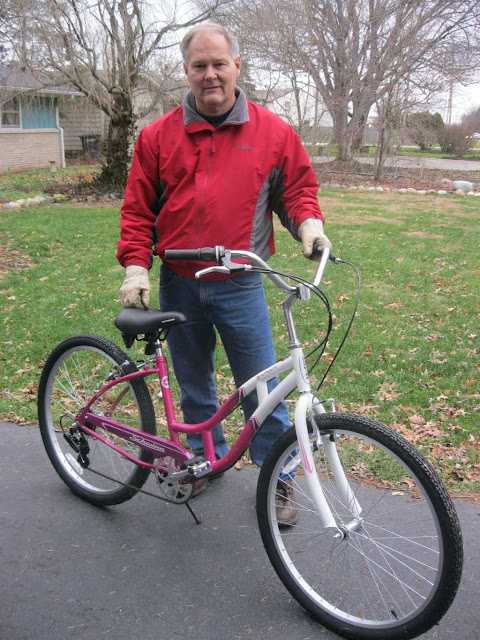 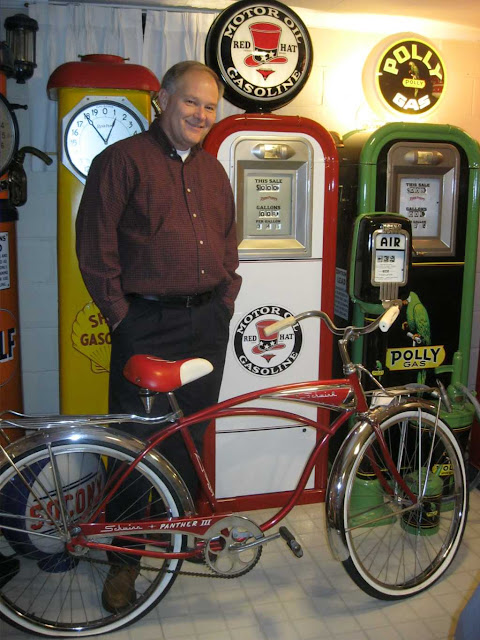 New Year's Eve
Posted by John Parsons at 7:04 AM

John: That is one of the best bike karma stories ever.
On a different note, I completely understand what you are doing in Indiana. You might recall my discussions with you about when my brother and I went to do the same thing at our mom's vacant house that had fallen into disrepair unbeknown to us, and we hauled out two 20 yard dumpsters full that were taken to the dump. They don't do it by the pound, they do it by the load. It broke my heart to dipose of certain family mementos irreparably harmed by water damage from the leaking roof and soffits. I'll just have to keep those memories in my mind and heart. Something you will have to do, too. I hope you took some photos of the chaos, because once this all passes you'll be able to look a them and actually chuckle about something that isn't funny at all right now.
You will be please to know you missed 60 to 70 mph winds on the 30th in eastern Idaho and Rupert. A gust broke the antenna off my ex father in laws farm house. It had made it more than 55 years. He has satellite now, but still...
Peace be with you as you continue your toil. Happy New Year today, and bless your heart.
Lots of love, spuddy buddie

THAT IS SOOOO COOL!! Love that kind of stuff!!