Touched by Another Angel 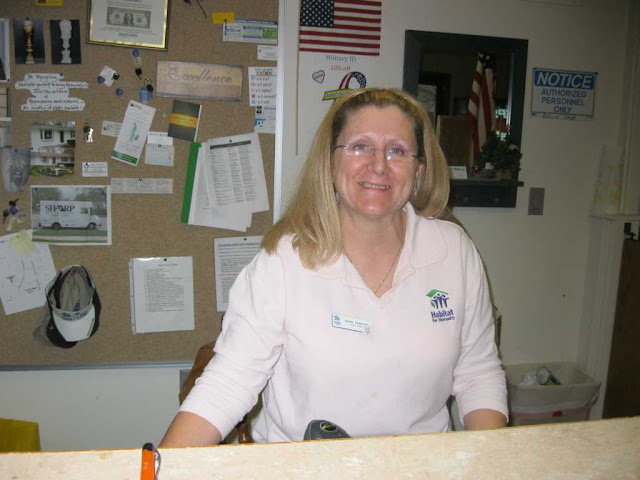 This is what an Angel looks like.  Her name is Ginny.  Ginny Parsons, to be exact.  Some people would say she is my cousin because she's my Dad's brother's daughter.  But don't let that family relationship stuff fool you.  She's a card-carrying Angel and keeps her wings tucked nicely behind that Habitat for Humanity shirt she's wearing.  Angels like to hang out around Habitat ReStores and "builds" as Habitat calls its housing projects.  Ginny is manager of the Lafayette Habitat ReStore and she's an amazing Manager & Angel, too.  When I was at my lowest ebb last week, she called me up on that rainy day and picked me right up out of the pits I was wallowing in.  She said, "Randy (that's my name here) I'm coming out to your Mom's house New Year Eve so we can make The Plan."  Sure enough, she was Ginny on the spot at 10 am Saturday and we spent two hours making The Plan.  Angel Ginny will be coming out today at 9 am to spend the entire day carrying out The Plan.  You see, Angel Ginny is not just any old ReStore manager, she is one totally Type A Parsons kind of person.  You should see that ReStore--it's like a CostCo of Restore's.  It's huge and it's totally departmentalized and everything is organized like the inside of a swiss watch.  It's simply and utterly amazing.  And it's all because Angel Ginny always works with The Plan in hand.  She follows The Plan to the letter.

Angel Ginny is taking control of Mom's place for a day today.  The Plan calls for all the clothes closets to be completely cleaned out by the end of the day.  She's already arranged for all Mom's clothes to be taken to The Soldier's Home where they will be wash, dry-cleaned and put into a "store" in which the facility's elderly clients can shop for free.  Angel Ginny will also take Mom's Baldwin organ out to Soldier's Home, too.  Once that's done, Angel Ginny is going to find an appropriate home for all of the many hundreds of books in the house.  She's excited many of those books will be in valuable dollars to benefit Habitat's local projects.  Oh, my, Angel Ginny is a ball of Heavenly Energy.  She is so fun.  I am blessed to have so many Great and Wise Angels helping me now.  Lorna, Lynn, Doug, Ed and now Ginny.  How good is this?  VERY GOOD!

Have a great day & Many Cheers, jp
Posted by John Parsons at 5:37 AM

I'm so happy to hear you got a reprieve. thank you to Ginny from me too!