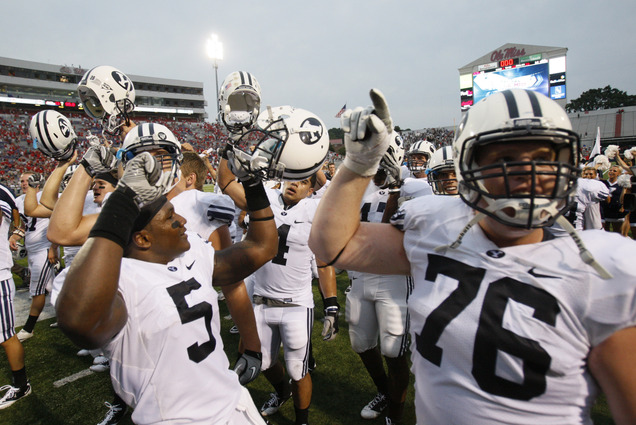 The BYU Cougs won over Ol' Miss 14-13 today.  Frankly, I still can't believe they won this game.  It was totally out of their reach.  The Ol' Miss Rebels led 13-ZIP after three quarters.  The way BYU had been playing up to that point left no doubt they were going to go down in defeat.  Frankly, I thought they would get shut out and go home in total disgrace with the score something like 24-0.

Well, guess what?  BYU won 14-13.  I had to look at the score several times from several different sources to actually believe it.  I checked out of this game when they fell behind 10-ZIP.  Here's what happened.  They drove down to the Ol' Miss 22 yard line and QB Jake Heaps tossed a pass that got intercepted at the Ol' Miss four yard line and run back for a 96-yard touchdown.  Opps.

Well, at that time, I figured BYU was toast. Here's what happened.  Heaps led a decent drive to bring the Cougs to within 13-7.  But nothing was happening for the Cougs.  They couldn't get it together.  Maybe it was all those Ol' Miss Hot Toddys!

Well, just when things looked as bleak as bleak can be, The Spirit of Brigham Young came back into play when someone whispered "This Is The Place" in the ear of Kyle Van Noy.  Kyle put himself in The Right Place and stripped the ball from Ol' Miss Quarterback Zack Stoudt and took it all the way to the bank, putting BYU up 14-13 after Justin Sorensen’s PAT with 5:09 remaining.  BYU's defense held on for the awesome, incredible win.  GO COUGS!

It's hard to believe the Cougs pulled off this incredible win.  They acted and appeared doomed.  No one would have blamed them for dropping this game.  How would you like to be playing in 95 degree weather with 90 percent humidity?  Heck, we'd be pooped just going to get the morning newspaper in weather like that.  The Cougs did it.  They "brought it" to Ol' Miss.  Just when 99% of America counted them down and out, they brought themselves back to life and sent Ol' Miss down to defeat.

After all we have read about the alcohol culture of Oxford, Mississippi, we can only imagine how this defeat stings in their Hot Toddy glasses.  Afterall, they were up 13-ZIP at the end of three quarters.  All they had to do was hold on.  And they blew it.  Blowing it doesn't spin well in the SEC--especially in Mississippi where "football is life."