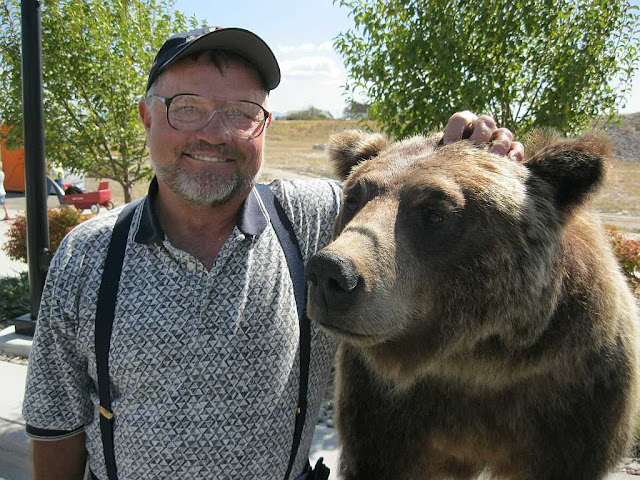 Yesterday marked the annual "Harvest Fest" at the Snake River Landing development.  There were hundreds of people there, perhaps even as many as a thousand...or more.  We were very surprised to see the sprawling, wide array of displays, vendors, musical acts, food service, etc.  There was even a miniature train carrying little kids around.  The Scouts set up teepees and put on goofy costumes attempting to look like mountain men and Native Americans.  Although the parents were quite proud of the Scouts, they looked more like a Saturday Night Live parody than authentic mountain men.

Susun and I milled around amused, amazed and attracted to various displays and vendors.  As we came down the long gauntlet of tents, we were quite pleased to see the Idaho Fish & Game's official Bear Aware outfit fully deployed. Leisje Meates, Eastern Idaho's Bear I &E Technician, held court with a wide array of stuffed bears, plastic and plaster casts of bear tracks, bear claws, bear skins and all things bear.

We have been reading about Ms. Meates for a few years.  She has carved quite a reputation for herself, especially up in Island Park and the Teton Valley.  If there's Bear Action going on in those localities, Leisje will be in the middle of it.  Although she's not law enforcement certified, she's courageous when confronting slovenly vacation homeowners whose garbage attracts bears.  And you all know--a fed bear is a dead bear.

Susun and I had a great time visiting with Leisje.  She's The Real Deal, as down home, honest and forthright as you would ever hope to meet.  Ask her a question and you're going to get a straight shooting answer that cuts right to the core of your curiosity.  Leisje really helped us hone our knowledge of how to use bear spray.  You'd think it would be pretty simple to use bear spray but it's not.  There's almost an art form to its use and it is a very "nuanced" skill.  Obviously, you have to be fearless to use it in the first place but once you are using it, you better be prepared to use it right or else you're going to be bear brunch and crunch.

We told Leisje about Rachel's bear spray holsters and went home to  grab them to take back for a show and tell.  That's when we asked Leisje to take our photo with one of the stars of her I&E roadshow.  She got a chuckle out of me posing with the bruin.

We asked her about reports we have been hearing about some guy in Driggs who faced down a sow grizzly with two cubs.  She said she sought him out to get his story face-to-face.  She said he was "just a regular guy," not a hunter or fisherman or even particularly an outdoorsman.  He happened to be out walking with his Malamute.  The dog charged what turned out to be a grizzly bear, apparently expecting it to run like black bears do.  Nah, Ma Grizz don't run from no dog.  So, the bear charged this apparently mild-mannered average Joe.  He whips out his bear spray and gives it a wee dose.  The bear retreats but then spins and charges a second time.  Once again, our average Joe gives it a second dose.  The bear spins, backs off and then roars into a THIRD charge!  WOW!  Somehow, this non-outdoorsman must have had ice water running in his veins and nerves of pure stainless steel because he had enough composure to have enough spray left in the canister to give the bear yet one more dose of spray, this time from point blank range in the face.  YIKES!  The third dose did the trick and the bear  turned around, called to her cubs and took off running into the oblivion of nearby willows and brush.  The dog, of course, cowered behind its master all this time with its paws over its eyes.  Incredible story.

Leisje joined us about 25 feet from the stuffed bear in the photo above and made sure we realized the bear could cover that distance in a mere one second.  The human reaction time is slightly more than one second.  I just found an online testing site.  In five tries, my reaction time was definitely OVER one second.  The first try was 1.8 seconds. You can click here to check your own reaction time.  So, the point is that even if you have your bear spray out and pointed at the bear, chances are you won't be able to push down on the trigger until the bear is on you.  That's why Leisje said to give it a two second pulse to put some spray in the air between you and the bear.  Don't wait for the potentially fatal charge--be proactive.  She also helped us understand how to spray into the wind if a bear is charging from upwind on a windy day.  She said you WILL spray yourself but it's better than the alternative and she showed us how to spray while reducing the impact of the spray on our own faces.  She was awesome and, by far, the best bear expert we have ever talked to.  Being Bear Aware is an educational process.  You can't simply read a book or pamphlet or listen to one person.  You need to assimilate a variety of insights and knowledge from diverse sources.  Maybe then, you can get comfortable enough to be "bearly there."

Many Cheers!  jp
Posted by John Parsons at 2:29 PM

This, I can't wait to hear about!

Me too. I'm bettin' that old bear's ticker stopped tickin' a while ago.

By the way, before posting this, I just noticed my word verification is "berse"....almost "bears".