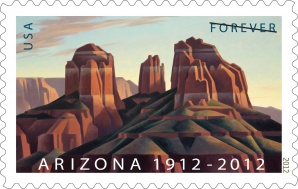 The Arizona Centennial stamp was unveiled Friday on the steps of the Prescott, Arizona, Courthouse.  The stamp will be available on Centennial Day, which also happens to be Valentine's Day 2012.  That's Sedona's Cathedral Rock stylized by famous artist Ed Mell.  We've hiked many a time to the little notch between the left and middle monoliths.  Heck, who knows, we might even hike there on Statehood Day carrying a sheet of the stamps.  That would be a cool way to celebrate the Centennial this coming February.  We love commemorative stamps and this one is awesome.  Since they are "forever" stamps, we will probably buy a boatload of them to use over the years ahead.  Click here for a Joanna Dodder Nellans Prescott Courier article on the unveiling.  One of our blog readers, Bill Cowan, is mentioned in the article.

Speaking of Arizona, we'd like to remind our Grand Canyon State readers that Grand Falls is up and running right now.  This would be a perfect weekend to drive out on The Rez to check it out.  The weather should be perfect and the roads should be sufficiently dried out as well.  The flow is about a thousand cfs give or take.
We happened to be reminded of this factoid in a roundabout manner.  We were looking at our blog traffic stats this morning and noticed a referral arrived early today via The Hike Arizona website. That's a blast from the past and a karmic one, too.  Anyway, we went to Hike Arizona check out which page sent the visitor to our blog and it was one on Grand Falls that we posted in 2005.  So, that's what caused us to check the flow at Grand Falls.

Hike Arizona or "HAZ," as it is known played a huge role in our lives from 2002 to 2006.  This week we decided we are going to A) get back in hiking shape and B) hike as often as possible while in Arizona.  In fact, last night, we decided we're going to hike either the Bear or Wilson Mountain Trails within 48 hours of our arrival in Ol' Airy Zonie.  We'd been thinking fond thoughts of HAZ within the last 24 hours and, voila, some stranger shows up on the blog direct from HAZ.  Yeah, that's karmic.

Yesterday was a nice laid back day.  Susun found a different hairdresser and is thoroughly pleased with her new "do."  We worked out on the treadmill for two 30-minute sessions.  Back in high school football days, twice a day pre-season workouts were called "double sessions."  That's what we're now calling our two daily visits to the treadmill.  It's turning out that machine is quite fun and those 30 minutes fly by.  It doesn't seem like drudgery (or is that trudgery?)  at all.

Today's going to be another glorious day. This is the last official weekend of summer.  There's only four more days until the official onset of fall so this weekend is the true twilight of summer's siren season.

A nice thing showed up in the morning newspaper.  The editors decided to do one of those generic "slow news day" articles on what makes Idaho Falls such a special and attractive place.  They touted all the usual suspects such as "great place to raise a family," "low cost of living," and so on.  But the number one thing they featured above and beyond all of the rest was the Greenbelt, stating: "The Greenbelt tops the list of five things that make Idaho Falls a great place to live."  YEA!  That's cool.  We couldn't agree more wholeheartedly.

When we first laid eyes on this city, it was the Greenbelt that cast a spell over our psyches.  We figured any city that would invest as much in a Greenbelt as this one has obviously done was a city that truly cared about "the finer things of life."  If the river banks would have been in a neglected state of shoddy disrepair and disrespect, I doubt we would have given a second glance to this place.  We've coined a saying that "You can judge a city by its library."  The corollary to that saying is "Libraries are like eyes--people say human eyes are the window to the soul--well, a library is a window to the soul of a city."

Well, 99% of Western cities don't have a great big famous river running smack through the middle of town.  But it's fair to adapt that library cliche to the Greenbelt.  "The Greenbelt is like a human's eyes--it is like a window of the soul of this city."  And , by the way, Idaho Falls has one of the best libraries for a city this size of any other Intermountain West city of a similar size.  It's awesome.

Well, that's all the meandering chatter we have this morning.  Have a great Saturday and Many Cheers, jp
Posted by John Parsons at 7:24 AM