The zucchini came out Friday and their vines went into the trash Saturday.  We placed the squash on Freecycle and a woman hurried here to take them all.  Do you know about Freecycle?  If not, you sure ought to.  Sometimes, there are things you simply can't take to a thrift store--like maybe a open bag of concrete mix, or some leftover boards or maybe some perishable summer squash.  That's when Freecycle shines.  Click here to read the Wiki on Freecycle.   We're Freecycle novices even though we've used it for four years.  DF & LBR Terry M has a Master's Degree in Freecycle, or maybe that's a black belt, who knows?  Anyway, it's a great tool in the arsenal of stuff management.

All that's left in our once glowing garden are the sunflowers, a few hardy corn stalks and one lovely hollyhock.  Susun and I have been debating whether this was our best garden here.  We both tend to think so and a review of previous year's photos tends to buttress our conclusions. 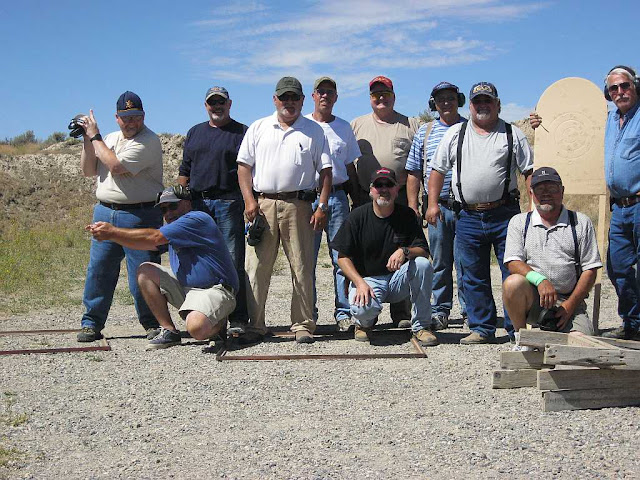 The day seemed to be pretty busy for both of us.  The Farmers Market was its usual delightful self--we enjoyed SOl Rio tacos for breakfast on the nearby park bench alongside the river.  I logged another treadmill session and Susun went out to inspect the Habitat "build site" in Ammon.  Late in the afternoon, I went to the shooting range to practice for this morning's ICORE match.  The group photo above is the motley crew that attended the August ICORE match.  These guys are a lot of fun.  They all know each other quite well and they love to heckle and make fun of each other during an ICORE match.  You go up to the firing line and there is this group of guys standing behind you laughing at you and telling you that you can't hit Jack Stuff. It's adds a whole new spin to "shooting under pressure."  All of these normal looking guys are quite the expert marksmen and you would be amazed at how quickly and accurately they can shoot revolvers.  The two guys on the left in mocking poses are faster than striking rattlesnakes and a whole lot accurate.  They are very impressive to watch in action.

Susun will be going on her Sunday Bike Ride with Dear Friend Teresa.  We wish we could join them but we will be otherwise occupied spinning a wheel of a different sort.  Did you know that revolvers are now called "Wheel guns?"  I sure didn't.  Guess you learn something new every day.

DF & LBR Maggie has returned from a fabulous vacation in Monterrey, California.  Boy, oh, boy, she and Steve have a superb place right on the edge of the coast and they really soaked up all of the ambiance of that trendy locale.  Steve, believe it or not, shot an 88 on the famed Pebble Beach Golf Course.  We had no idea he was that good.  Below is a sunset view from their room.  Way to go, Maggie & Steve...and Welcome Home. 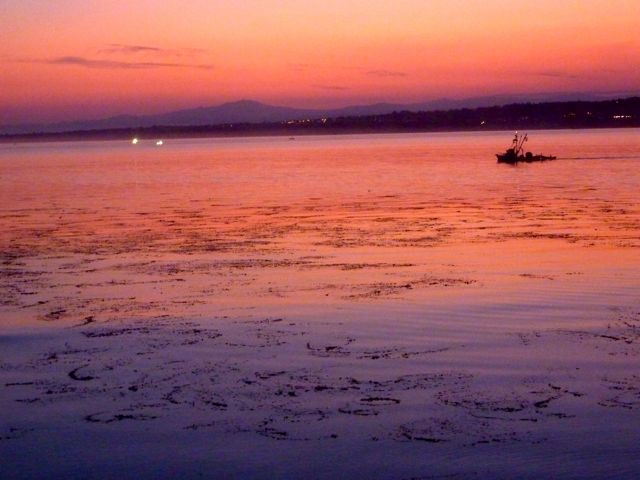 Terry M, Master of Freecycle mentioned above, just send along a reminder to check out the Sunday Garfield cartoon as it is relevant to this scintillating blog here.  Right ON, Terry! (You can click on the cartoon for a larger version.)  Two more notes below Garfield.

While we were writing this blog post, Goatherder sent a note about that human reaction timing site.  He took the test and now rates in the Top 100 users.  His reaction time is less than a third of a second.  Apparently all that time he spends tending goats has made him blinding fast.  Way to go, GH!

Lastly, we wrote a story about the bear below so don't forget to scroll down, especially if you need some "ZZZ's" this morning!

Many Cheers!  jp
Posted by John Parsons at 8:02 AM