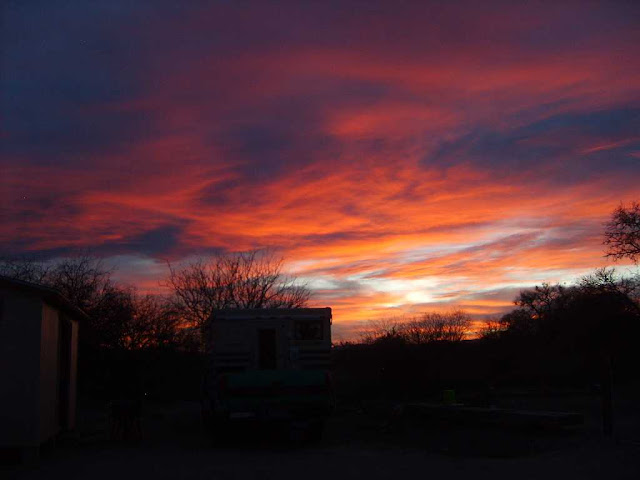 Don't forget to wear green.  Last night we had corned beef and cabbage.  It simmered all day in the crock pot yesterday while I studied my ham stuff.  Made a yummy din-din.
There is supposed to be a storm-ette appearing onstage today.  The evening clouds were a harbinger of today's wannabe storm.  Those clouds didn't disappoint when the last light glowed in the sky. Great mid-March sunset.
We switched to burning mesquite last night.  After I hit the wall studying ham radio stuff, I fired up the chain saw and cut a lot of dead mesquite limbs.  Robin and Gary came over and the four of us enjoyed the fire until is was as "dark as the inside of a mule's mouth," as Houn' Dawg is fond of saying.

Susun spent most of the day in Sedona helping Chuck and Beth.  Chuck treated her to lunch at Jose's and Susun raved at the place's hamburger.  She stopped at Kate Blevin's Verde Earthworks on the way home and received a tour of the recycling facility.  Kate's a fearless pioneer in what she does and Susun really enjoyed the visit.

I studied over a period of 10 hours--about 7.5 of which were genuine nose to the grindstone study.  Since I'm not in the study groove, I had to take frequent breaks to prevent maximum brain overload.  I'm getting better at the practice exams and am scoring consistently in the 80-percentile.  I even have one exam with a 96 percent correct score.  It turned out there are only 396 questions to study, not 1,000 as I was told earlier.  The questions are organized in ten categories with a grand total of 36 subgroups.  The test itself has to have on question from each of the 36 groups.  Pretty simple, huh? The goal for each of the next two days is to review each and every one of those 396 questions one-by-one.  Heck, if I study for ten hours that's only 39.6 question an hour or one every 70-90 seconds.  Hum...maybe we will review half today and half tomorrow.  Yeah, that's a better idea.  Then we can use 8 hours studying 200 questions or roughly 25 an hour.  Shoot, that gives us over two minutes for each question.  Piece o' cake.

During one study break, I called up Houn' Dawg in Idaho Falls and we cooked up a grand plan.  We spent $129 to book ourselves into the Squirrel Meadows Cabin for three nights August 5-7.  Suzanne, HD and the two of us will have a fine time there on the Old Reclamation Road east of Ashton, Idaho. You might be able to click here to read about the place.  HD and I had booked the place for the same weekend last year but that's when I got the Middle Fork permit we never used.  So, we not only didn't go on the Middle Fork, we didn't go to Squirrel Meadows either.

Meanwhile, out of the clear blue, our neighbor Dean D. and his grandson came over to visit.  Dean drove his Pleistocene Ford Bronco.  As far as I know, the Bronco hadn't moved for a few years so it must have been a real chore to get it started.  Dean's on a short leash right now.  He's undergoing chemotherapy after surviving brain surgery that removed a tumor.  He's moving low and slow so it was a real treat for him to visit.  What a wonderful Gentleman he is.  We've often called him a Dream Grand Pa.  He's the kind of Grand Pa every kid would dream of having.  I took a picture of Dean in his Bronco but he looks so tired I decided not to use it on this blog.  It's better to show his beloved Bronco and I'm sure Dean would agree.  We pray for his success in his battle with the cancer and we pray for his full recovery.  It was awesome for him to come to visit.

That's about it for The Daily News yesterday.  Have a great day and Cheers, jp 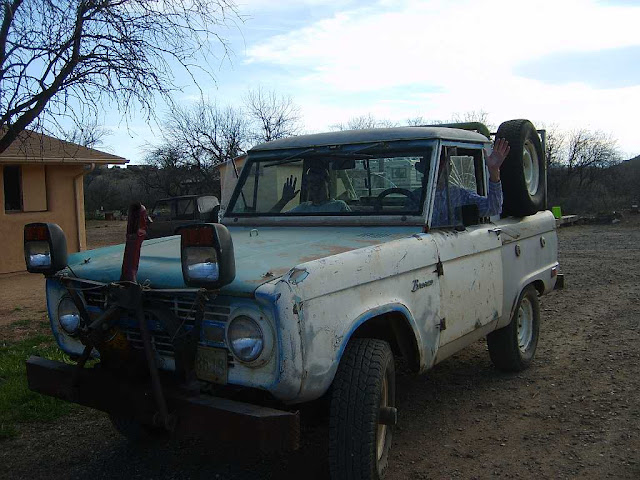