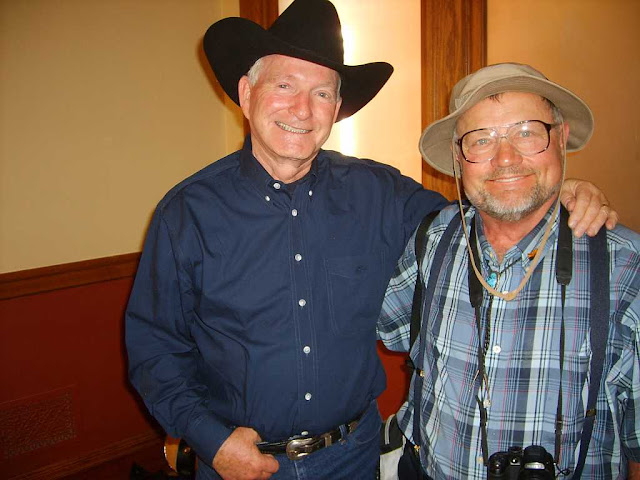 When enough times passes, once grand plans fade as to blogging on and on about some event.  So it is with Thursday.  We'd like to move on but we've been "stuck" thinking about how to describe that day  So, here's the short and sweet of it.

We got an early start and dropped Susun off at Sky Harbor well before her departure.  I then drove over into what's called either "the barrio" or "gangland," depending on your perspective.  There's a legendary Mexican joint there--Carolina's.  I enjoyed a big at three-way burro and then headed to Phoenix Brick to peruse fire bricks for the earth oven project.

Then it was back out onto the NASCAR track they call the Maricopa & Black Canyon freeways to head north in search of a Harbor Freight and a Wally World.  By some pure fluke I stumbled into BOTH of them in the same shopping all someplace out on the nameless, faceless Westside.  I bought some small pliers to fix my suspenders and a 22-inch magnetic sweeper to find all the nails and screws hiding on our property.  I picked up another couple of hinges at Wally for the door project and then headed back south for the Capitol.

I went through the airport-style security at the swanky State Executive Tower and then went out in front of the Old Capitol to get some fotos.  Afterwards, I refreshed my memory about all the great historical stuff littered through the so-called Capitol Museum.  I went to peer at the original copy of the Arizona Constitution (on display for one day only) and then finally took in the USS Arizona exhibit.  That was a real somber experience and made me feel very sad and subdued.

Finally, I logged in at the entrance to the special event.  Luckily, my name was on the RSVP list and I was allowed to enter.  I arrived early enough to get a lot of interesting photos of various people and especially the Arizona Rough Riders re-enactors.  Famous Valley radio DJ Dave Pratt was the emcee of the event and he was really cool.  He came over to introduce himself to me just like I was a long lost old friend.  I struck up a conversation with Jody Drake (The Sharlot Hall re-enactor) and took a seat selected to have the best view of the seated Governor.

There were lots of chairs reserved for various people so the best people like me could do was the middle of the third row.  A couple of legislators sat beside and behind me and they carried on a lively conversation about "insider stuff."  The Old Senate Chambers is perhaps smaller than the inside of our straw house.  It's really small.  The room was swarming with media people and it became quite crowded and stuffy.

A guy with  white gloves brought in a box and set up a rare historical document on an easel. It was the Organic Act.  That's the piece of paper that created Arizona Territory.  it was signed by President Abraham Lincoln on August 22, 1863, and travel by horse and wagon that year across America with the first Territorial Governor, James Goodwin, as proof of his authority to begin to govern the wild lands and people of Old Arizona.   People swarmed in front of the Organic Act like it was made of pure gold or something.

By and by, everyone rose as the Governor entered and took her place near the podium.  Pratt got the event underway only seven minutes late.  The Rough Riders marched in with both the US and Arizona flags and everyone recited the Pledge of Allegiance.

Pratt introduced all the dignitaries attending.  As nearly as I could tell, just about the entire State Supreme Court was on hand as well as some famous retired Chief Justices.

Official State Historian and Living Legend Marshall Trimble took the stage to sing "I Love Arizona."  He put so much incredible emotion into this rendition that the audience was clearly spellbound.  When he finished, he turned and blew a kiss to the Governor.  She smiled her best coy smile and winked back at him.

The Governor read her official proclamation about the day.  Secretary of State Ken Bennett made some remarks and then the Arizona Historical Foundation President officially donated the Organic Act to the State's possession.  It's easily the rarest of Arizona's rare documents and State officials are delighted to have it.


Sharlot (AKA Jody) delivered her epic recital of the poem "Arizona" (described below).

Then Secretary of State Bennett and the Governor Brewer called out all of the descendants of those who convened the Territorial Constitutional Convention.  Each of these descendants received a special certificate from the Governor.

There were more remarks and eventually the event drew to a close.  I managed to me real close to the Organic Act and actually got a decent foto of Lincoln's signature.  I also hugged Sharlot (AKA Jody) and asked Trimble is I could shake his hand.  I told him he is one of my Heroes and, as chance would have it, one of the descendants actually took a great foto of me and Marshall acting like we were Old Friends or something.  I also got to speak briefly with Sec. of State Bennett.  We've had some history together back when he was a State Representative and then Senator.  He hails from Prescott so there was reason for our paths to cross in the 1990's when we worked on Verde River water conservation issues.

I passed on my heartfelt regards to the event organizer about it being "the best" Arizona event I had ever attended in more than 30 years.  Then I went downstairs and grabbed a cookie with the State Seal embedded on it and trotted back through the metal detector and pat down of the Executive Tower.  I headed back out on to the NASCAR freeways a few minutes after 3 pm and arrived home at 4:47 pm.

Upon arrival home, I saw someone had put something on our front door.  What a surprise!  It turned out to be a great poster from Wayne R. entitled "Verde Valley ca. 5 Million Years Ago."  It shows all the exotic and extinct creatures that would have been roaming this place back then.  They are different than the creatures that roam it now.

I had a fire up and flickering before sunset and Happy Hour was then soon underway as well.  The "afterlight" was spectacular and a fitting tribute to a Dear Diary Day.  I fired off a dutch oven of potatoes over the hot coals and went to sleep a full and Happy Puppy.

As chance would have it, I captured lots and lots of cool fotos Thursday.  As usual when I have an overabundance of cool fotos, it takes me awhile to process them.  That's why there's only one foto up top of me and Marshall.  We'll let you know when we get our Thursday album up and running.

Great write up of what sounds like it was an actually valid reason to visit Phoenix. So glad you were there to chronicle it for us. Unfortunately, this:

"When he finished, he turned and blew a kiss to the Governor. She smiled her best coy smile and winked back at him."

would have made me throw up in my mouth a little...