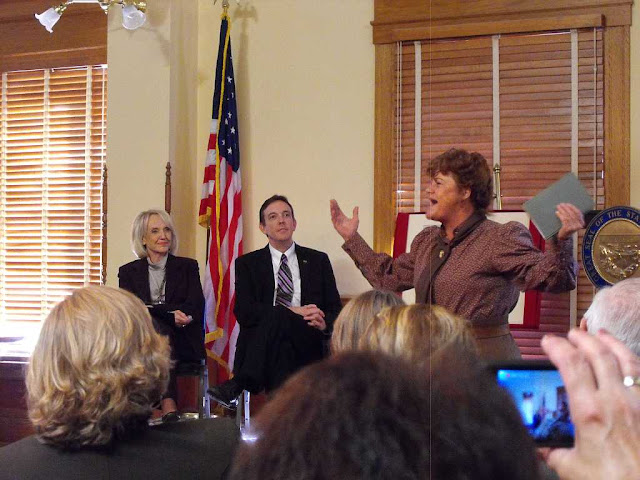 Sharlot Hall has always been one of my Heroines.  Sharlot is the epitome of Arizona.  She was without peer in life and remains larger than life generations after her passing.  Long ago--perhaps 1982--I found a first edition copy of Sharlot's 1911 "Cactus & Pine" and it has been our most treasured possession ever since.  One of the reasons Susun and I are together is that I read Sharlot Hall poems during Susun's first visit to the land here at Montezuma Well. We never leave home with a copy of Sharlot's wonderful books of poems.

The gathering yesterday at the Capitol was easily the finest and most memorable Arizona event I've ever attended since moving to this State in 1979.  It was quintessentially Arizonan.  The highlight of the event was a re-enactment of Sharlot Hall by Jody Drake.  This woman's performance of Sharlot Hall's epic 1905 poem "Arizona"  was quite simply off the charts, knock-your-socks-off riveting and scintillating.  For a few minutes in the Old Senate Chambers of the 1898 Arizona copper-domed Capitol building, Sharlot Hall was very much alive.  Sharlot pranced and pirouetted and performed as only Sharlot would have done in her prime years.  She walked the aisles and pointed fingers and stared into the eyes of the Governor with a fire and fury unlike any other individual performance I've ever seen in my lifetime.  Her high and strong voice filled the oak-ribbed room with raw emotion one rarely experiences in public.  Frankly, it was all I could do to struggle to maintain my composure and not burst into tears.  Ever as I write this blog post, it's difficult to see the keyboard because of the tears in my eyes.  I've never been so affected by a performance before.  It was as if the true Spirit of Sharlot has come down from The Heavens and lived again in this woman's body. The word "powerful" is meek indeed to describe the electricity pulsing in that room.  You can look at Governor Jan Brewer and Secretary of State Ken Bennett in the photo above and sense a feeling of awe on their faces.  I glanced at the assemblage of current and retired Arizona Supreme Court Justices present and you should have seen their rapt and riveted attention.  It was if Sharlot had reached deep into each of their hearts and gripped their very soul.  In honor of Sharlot Hall, The State of Arizona, Jody Drake and in the Spirit of the event yesterday, I've decided to reprint here the poem "Arizona" in its entirety.  Imagine these mere words brought alive in that historic old room.  It was a Moment for The Ages. (More comments below poem.)


In his message of December, 1905, President Roosevelt advised that Arizona and New Mexico be admitted to the union as one state. In Arizona the opposition to this "joint-statehood" was bitter and determined.  Sharlot's poem became an instant rallying cry for the indignant Arizona population.  it was eventually distributed to every US Congressman and Senator.  It has been widely credited as playing a pivotal role in Arizona's eventual 1912 Statehood. It's an epic poem that's as powerful today as it was back then.  Just try to imagine these words brought back to life so hauntingly in the Old Senate Chambers yesterday.  WOW!


No beggar she in the mighty hall where her bay-crowned sisters wait,
No empty-handed pleader for the right of a free-born state;
No child, with a child's insistence, demanding a gilded toy;
But a fair-browed, queenly woman, strong to create or destroy.
Wise for the need of the sons she has bred in the school where weaklings fail,
Where cunning is less than manhood, and deeds, not words, avail:
With the high, unswerving purpose that measures and overcomes;
And the faith in the Farthest Vision that builded her hard-won homes.

Link her, in her clean-proved fitness, in her right to stand alone,—
Secure for whatever future in the strength that her past has won,—
Link her, in her morning beauty, with another, however fair?
And open your jealous portal and bid her enter there
With shackles on wrist and ankle, and dust on her stately head,
And her proud eyes dim with weeping? No! Bar your doors instead
And seal them fast forever! but let her go her way—
Uncrowned if you will, but unshackled, to wait for a larger day.

Ay! Let her go bare-handed; bound with no grudging gift;
Back to her own free spaces where her rock- ribbed mountains lift
Their walls like a sheltering fortress—back to her house and blood;
And we of her blood will go our way and reckon your judgment good.
We will wait outside your sullen door till the stars you wear grow dim
As the pale dawn-stars that swim and fade o'er our mighty Canon's rim.
We will lift no hand for the bays ye wear, nor covet your robes of state—
But ah! By the skies above us all, we will shame ye while we wait!

We will make ye the mould of an empire here in the land ye scorn;
While ye drowse and dream in your well-housed ease that States at your nod are born.
Ye have blotted your own beginnings, and taught your sons to forget
That ye did not spring fat-fed and old from the powers that bear and beget;
But the while ye follow your smooth-made roads to a fireside safe of fears,
Shall come a voice from a land still young, to sing in your age-dulled ears
The hero song of a strife as fine as your fathers' fathers knew,
When they dared the rivers of unmapped wilds at the will of a bark canoe—

The song of the deed in the doing, of the work still hot from the hand;
Of the yoke of man laid friendly-wise on the neck of a tameless land.
While your merchandise is weighing, we will bit and bridle and rein
The floods of the storm-rocked mountains and lead them down to the plain;
And the foam-ribbed, dark-hued waters, tired from that mighty race.
Shall lie at the feet of palm and vine and know their appointed place;
And out of that subtle union, desert and mountain-flood.
Shall be homes for a nation's choosing, where no home else had stood.

We will match the gold of your minting, with its mint-stamp dulled and marred
By the tears and blood that have stained it and the bands that have clutched too hard,
With the gold that no man has lied for—the gold no woman has made
The price of her truth and honor, plying a shameless trade:
The clean, pure gold of the mountains, straight from the strong, dark earth,
With no tang or taint upon it from the hour of its primal birth.
The trick of the money-changer, shifting his coins as he wills,
Ye may keep—no Christ was bartered for the wealth of our lavish hills.

"Yet we are a little people—too weak for the cares of state!"
Let us go our way—when ye look again, ye may find us, mayhap, too great.
Cities we lack—and gutters where children snatch for bread:
Numbers—and hordes of starvelings, toiling but never fed.
Spare pains that would make us greater in the pattern that ye have set;
We hold to the larger measure of the men that ye forget—
The men who, from trackless forests and prairies lone and far,
Hewed out the land where ye sit at ease and grudge us our fair-won star.

"There yet be men, my masters," though the net that the trickster flings
Lies wide on the land to its bitter shame, and his cunning parleyings
Have deafened the ears of Justice, that was blind and slow of old;
Yet Time, the last Great Judge, is not bought, or bribed, or sold;
And Time and the Race shall judge us—not a league of trafficking men,
Selling the trust of the people, to barter it back again;
Palming the lives of millions as a handful of easy coin—
With a single heart to the narrow verge where Craft and Statecraft join. 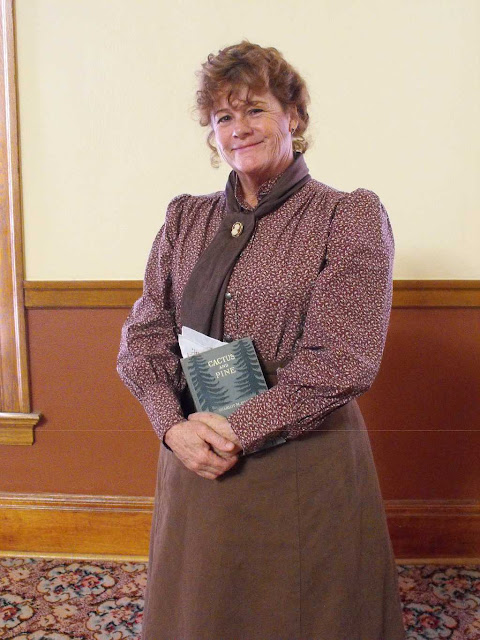 Before the room filled, I had the great fortune to get to visit with Sharlot.  We, of course, both own a first edition copy.  Jody and I hit it off right away.  She is SOOO Sharlot!  She even has a list of questions she's going to ask Sharlot when they get together in Heaven someday.  After the ceremony ended, I went back to her and asked if I could give her a hug.  She agreed.  I told her how special her performance had been.  You could ttell she really appreciated my comment.  If ever someone has brought somebody back to life, Jody has done so for Sharlot!
Posted by John Parsons at 9:48 AM

John this awesome! To know that Sharlot still lives through Jody Drake (and you) should bring a warm glow to every Arizonan's heart. THank you for being there. All in a day's karma!