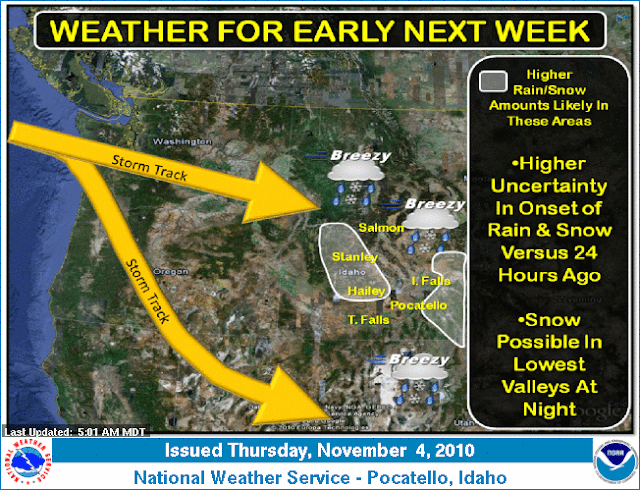 No, not that Vaunted Decade--we're talking temperatures.  Yesterday's high was 62, a full 13 degrees above normal.  Today will probably be the same but tomorrow is supposed to really pop a cork on the thermometer--it's gonna be 64 degrees!  Obviously, what with the Pacific Pitchfork (shown above) stabbing into the Snake River Plain, it's the Last Hurrah.

We made the best of it yesterday.  We finally put engine oil and gasoline into the MLS and fired it up.  It's well worth the almost $500 we paid for this machine.  It leaves nothing behind (pun intended).  They say the compression ratio is 8:1.  That's a joke, it's more like 4:1 or 5:1 but, hey, that means each bag we fill would have been four or five bags of leaves.  Yesterday was the first time in either of our lives when dealing with leaves was painless and almost downright fun.  It was over almost before it seemed we got started.  Shucks. Of course, there will be many more episodes of sucking leaves up from the lawn.  This was just Round One.

We did get lucky with our closest neighbor's leaves.  In the fading light of Tuesday evening, the 11th Ward's LDS Young Men and Young Women showed up at Chuck and Lynn's house and raked and bagged all of their leaves.  Lynn was positively beaming when she told me the story yesterday.

Yesterday was another good day at the Ten-Cent Stores.  We scored a brand new, name-brand 4x6 American flag for $2.  Also got a 50-quart igloo cooler to match our favorite all-time camping cooler. This particular cooler keeps ice intact longer than any other cooler of the same size.  This summer, we tried to entice someone on Craigs List to sell us a used one.  We offered to pay as much as $30 for a used one of this brand and type.  We even considerd buying a new one on eBay for $65!  We scored this one yesterday for $10.  Patience DOES pay! 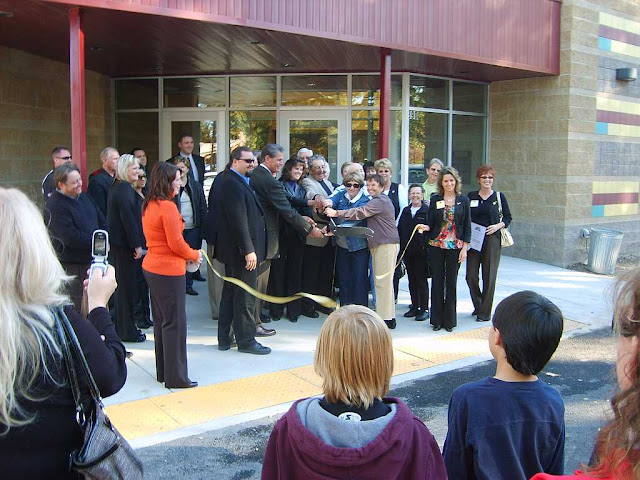 There were two highlights of the day yesterday--one public and one private.  The public highlight was a real Shining Moment.  The city dedicated the new renovation of the ice hockey rink.  There were perhaps 60-70 people on hand.  One of the main speakers became so emotional she couldn't talk.  The Mayor called it a "really good day for Idaho Falls."  The project cost way over a million bucks.  It's a Superb project and a point of pride for the community.  This community really believes strongly about investing in recreational facilities.  Twenty five years ago this week, voters approved a $1.65 million bond for the city's magnificent indoor swimming pool. When we first laid eyes on it back in 2005, we were awestruck.  It remains a fabulous facility and it's one of the Top Ten reasons we moved here in the first place.  Parks & Recreation here ROX!

The other highlight was receiving a cell phone call from my Minute Man Doctor while driving out to Freddie.  He reported the results of my blood work.  Of greatest importance to a Happy Hour Practitioner was the news that both my kidney and liver functions were very good for a soon-to-be-63-year-old!  YIPPEE!  All of the other readings were fine, too, and the baddie cholesterol was very low so Life is Indeed Good.

We are having a LOT of fun with our Twitter account.  It's helping us get back in sync with "all things Arizona."  We really want to be Good Snowbirds, smiling when we're supposed to and cooing compliments left and right.  Nary a discouraging word should ever fall from the lips of a Good Snowbird.  "By the time we get to Phoenix," we'll have enough Pollyanna stuff to talk about to bore the Natives right out of their skulls!
We know some people who have a downright aversion to Twitter.  Call it a mental block or something.  When they discuss it, it's usually in terms of something like, "I can't keep up with all this stuff."  Their plaintive protestations always remind me of Earl and Opal below.  Have a great day & Cheers!  jp