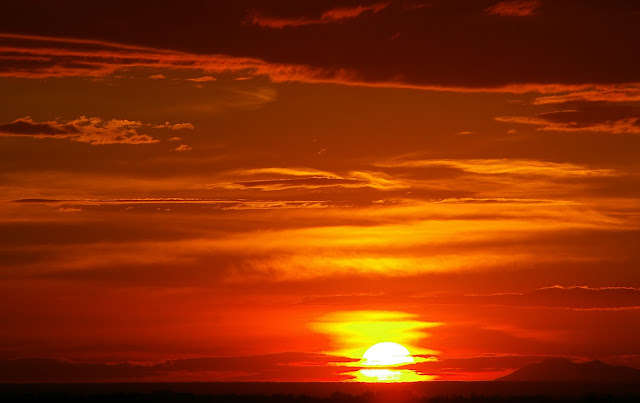 Here is Roger's Sunset Photo from October 7th. He lives east of Idaho Falls up on the sloping foothills of what's called "The Snake River Highlands." The Snake River Plain has a rather abrupt edge here. You can see it clearly not far east of here. We love looking at the geo-regional geographical context of this topographical reality.

Roger lives where sunsets come alive. He has all the "right stuff" to capture the pristine last light of any given day. He has the skills, the equipment, the eye, and the timing to make shots like this happen.
When we look upon a sunset photo such as the one above, we simply look in awe. You could put a little Red "X" at the bottom of the photo that would say "we are here."
We can't see these sunsets. Roger can. He captures them for posterity. It's awesome and amazing. He has our eternal THANKS for taking the time and trouble to put these gems out there where "the rest of us" can see them.

If it wasn't for Roger, nobody would know! Indeed.

And so it is fitting that tonight we have created a Glossary entry for Roger. For this point forward, he will simply be noted as "Roger." To learn about him you will have to go to the Glossary. After all, Roger is Simply Roger. We salute him.

Thanks, Roger, for bringing our World alive in a way that we could otherwise never know!