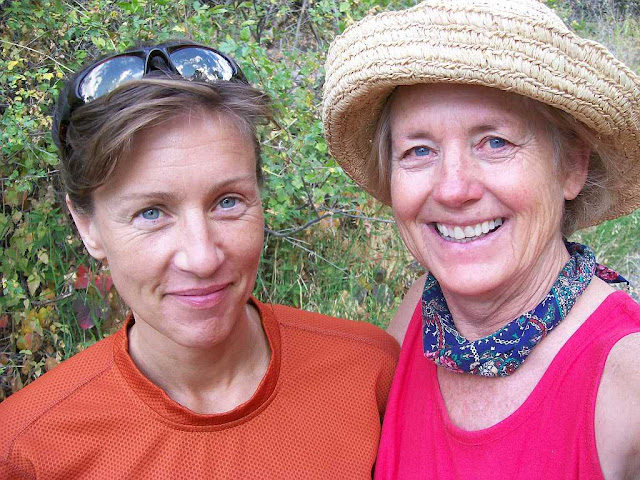 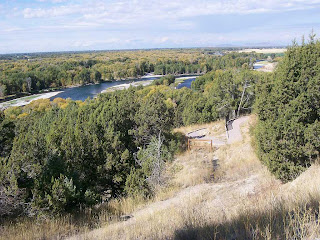 Before we launch off on the Porch Project, Susun and Friend Teresa had a great outing Thursday.  They drove out to what's called The Watercress Trail.  It's a BLM trail and really well done.  As you can see, it overlooks the Snake River downstream from Heise. They had a great time and the weather was perfect for their jaunt.  Thanks, Teresa, for being "up" for such a great spontaneous and fun thing to do!

OK, The Porch Project is officially underway and making good progress.  Yesterday we dug two 3+ foot deep holes about 10 inches in diameter.  I've never been real "big" on digging holes in the earth and I admire badgers and other creatures that excavate holes with such obvious gusto.  After finishing the holes in the early afternoon, we then went off to two rental companies and personally inspected their concrete mixers.  We picked out a good one that rents for $20 a day.  Next, we found the correct Simpson ties, bought two ten foot sticks of rebar and another four foot forming tube.

Today's Plan of Work begins with placing and tie-wiring the rebar into the holes.  Then we'll place and anchor the form tubes.  That's a real vital part of this job.  If the tubes are precisely and properly aligned and perfectly plumb, things will proceed quite nicely.  if the tubes aren't plumb and precise, everything unravels and the project turns into a nightmare.  We prefer the former over the latter.  The tubes have to be anchored really well because, as everyone knows, concrete is really heavy stuff and can easily shift an 8-inch diameter form tube out of alignment.  So, the whole morning will be taken up with messing around with rebar and the tubes and so forth.

If all goes well, we will have 10 bags of concrete mix and the Simpson ties and the mixer on hand by early afternoon and then the real fun will begin.  Mixing concrete is bad enough by itself.  This project requires that we move the concrete from the mixer to the tubes in plastic buckets!  There's no way we can lift a full bucket of concrete to the top of the tube so we're going to have to fill the buckets only half full--which means we will have to carry twice as many buckets.  One way or another, we have to move at least 8 bags of mix into the tubes so we're looking at moving well over a quarter ton of raw weight today.  Oh, joy, eh?

The final tricky thing of the day is the placement of the Simpson ties into the top of the tubes.  If these puppies aren't aligned right, we're in deep doo-doo once the concrete sets up.  There's no room for error on that part of the project.

The bright side of this process is simply this:  If we do everything correct and right and proper today, then it's smooth sailing for the remainder of the project.  Getting the two footers correctly placed is the hardest part of this project and easily involves the most sheer physical labor.  The rest of it is work, of course, but nothing like the magnitude of messing with these holes and everything that goes in the them.   Hopefully, we can finish mixing and pouring and get everything cleaned up before Happy Hour.  It's against the law to mess with concrete during Happy Hour--especially a FRIDAY Happy Hour.  If all goes well, we will definitely have good reason to celebrate a well-deserved TGIF this evening.  Here's hoping both of our spinal systems hold up well and we don't blow out some other part(s) of our aging anatomies.

In other news from yesterday, Shelly came and picked up the smoker unit. We sure are looking forward to visiting their farm to see the kune kunes.  Our Craigs List haul is now $475 and could go higher today if the 1991 Sidekick drives off into the horizon.  Believe it or not, the Sidekick might be finding a new home in Atomic City!  The Spudboater and Houn Dawg will probably LOL when they read the previous sentence.  No other readers of this blog know anything about Atomic City.  Let's put it this way, Atomic City is a local laughing stock and always on the short end of many a crude and rude joke making fun of derelict, deadend places.  Click here for the wiki on Atomic City. Well, as karma would have it, the owner of the Atomic City Saloon has taken a fancy toward the Sidekick.  We talked yesterday while I was in the kitchen utensil aisle of the Deseret Industries t-store.  This guy is really interested but he lamented he had to keep his saloon open yesterday and couldn't come to Idaho Falls.  So, shucks, I told him (his name is Phil like in the movie Groundhog Day) that since I didn't know a single soul in Atomic City that I would keep the vehicle unsold just for him because I thought it would be real nice to have a buddy out there in total CAT MOAN Country.  Oh, he was so overjoyed and said I would be welcome at his saloon any time for such hospitality.  He said he would be coming to town Friday morning.  So, we shall see, as they say.  Stay tuned on this one--it has some serious storytelling potential.

That's about it for this morning's edition of The Daily News.  Cheers!  jp

PS--Below are the site stats for the previous week.  The numbers reflect usage since June 19, not since the blog beginning back on January 1st.  It looks certain that we will top the 2,000 visitor mark this coming week, maybe even this weekend.  Interestingly, duration of visit rose from 2:59 to 3:55 during the past week while average daily visitor downticked to 20 from 22.  Page view averages remained essentially unchanged from last week.

10 females and 15 males in Atomic City. Median income 9300 bucks. Only one person under the age of 18. Sounds like paradise! Is this the Fabled lost city of Bum***K, Idaho? (or is that in Utah...) You absolutely MUST go in the Twin Buttes Bar (An Oasis in The Desert), drink and take pictures. DO IT!!

Hey Goatherder and Johnny: Those are good stats on AC. I recall seeing a real estate posting some obscure place for a house in Atomic City. It was going for something like $15,000. I recall laughing out loud that $15,000 wouldn't even get you a 100 year old garage in Boise's North End. Of course, I doubt there are many folks investing in real estate in AC, either, so you gotta price it just right. Location, Location, Location. Thanks for a good laugh today. And hope the Zuki sold, too. I'm putting ski gear on Craigslist tomorrow, too.