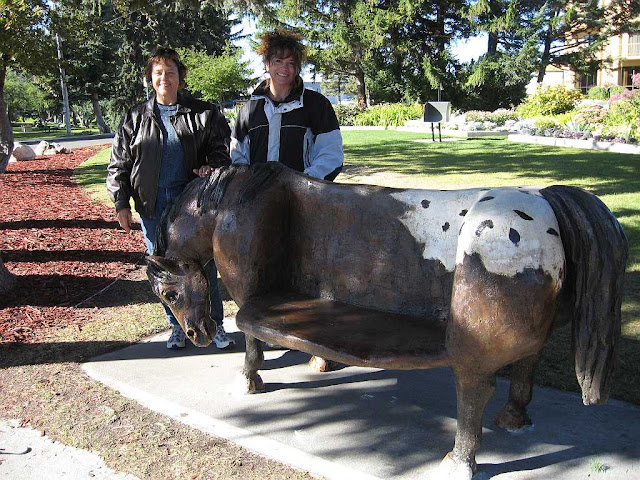 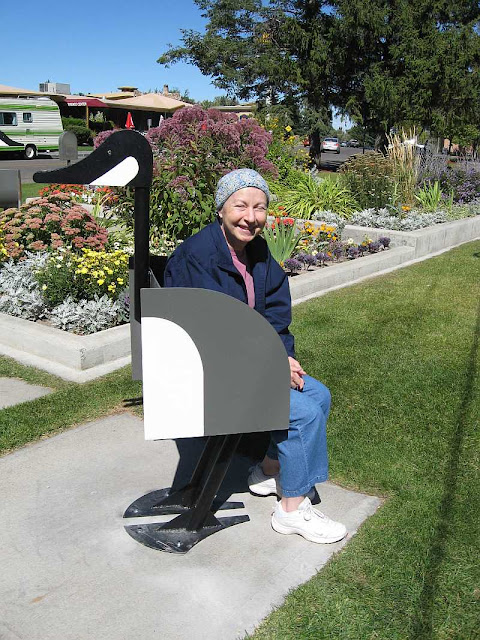 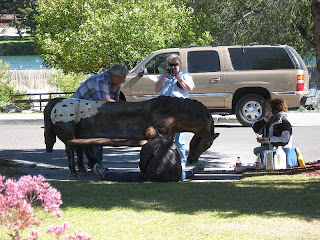 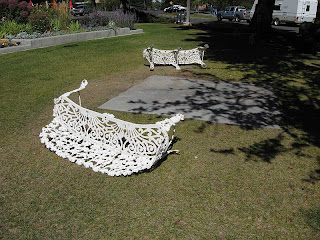 Susun gets home at 5:40 pm tonight.  Yippee!  It's really boring around this house when she's gone.  Have a safe and fun journey back to River City, Sweetie!

We had to make an unexpected hustle-trip over to Hilda's yesterday morning.  The pad the city poured for the horse bench proved to be too small so the city boss made a spot decision to move it to the Hilda Garden.  I was concerned about their choice of locations but it turned out great.  In the meantime, I was able to successfully lobby to get rid of the ugly white benches and replace them with a picnic table.

Meanwhile, I picked up Dina O. and we spent some quality time at Hilda's.  She was so excited to see the horse and geese.  Rhona F. the artist of the horse bench was touching up that 3,000 pound bench with her Mom and Dina enjoyed getting to meet them.

Each week our local daily newspaper does a lengthy editorial column giving various thumbs up and thumbs down icons to various people and groups.  I sent off a note yesterday morning urging Corey T., the editorialist, to give Carrie one of the thumbs up stories this week and he replied that he will.  I'll never tell Carrie I did that and I know she will be real surprised and happy to receive such public recognition.  The paper did a nice story on the benches in this morning's edition.  I will see if I can print and archive it here. 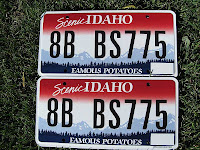 Next up was making the Zuki street legal.  It was legal to tow it home unlicensed from Utah.  I checked on that before leaving Springville last week.  I didn't want to drive the Zuki down to DMV unlicensed so I went down there yesterday and asked how to have it inspected.  I had to call Dispatch and request a Sheriff's Deputy to come to the garage.  By and by this guy came all draped with a gun, a taser and all of the rest of the cop stuff.  He was 6-6 and real gruff.  He even called in the VIN# to see if it was stolen or something.
He gave me a paper to take to DMV and imagine my surprise when the clerk told me the deputy wrote down the wrong VIN#!!!!!  HUH?  She said, "You should have had him to double check it."  I said, "I am not in the habit of telling a uniformed, armed officer that he needs to double check his work!"  Meanwhile, after much hemming and hawing, the clerk decided to simply write over the deputy's writing with her own writing.  Okie, dokie, I guess ya learn something new each day.  Our nickle-dime society has really anted up the cost of getting a vehicle registered--the total came to $90!  Ouch!

Then it was off to the insurance company.  They made me a deal and gave me 3 weeks to sell the other Zuki--the Sidekick--and said they wouldn't change me anything and they would simply substitute one Zuki for another. Now that's smart thinking.

After taking and sorting out all the recycles, I spent the evening messing with the Zuki instrument cluster and made no progress except to learn it's a far more daunting project than I imagined.

Today we're taking it to Art's Muffler at 7:50 am.  I suspect I will drop probably $200 on exhaust system work there.  Muffler and tailpipe work is something I can't do and never will be able to do.  It takes expensive, specialized equipment, the ability to weld like a pro and an eye for esoteric bends and twists and so forth.  Whatever they charge is way worth it in my book.

Ten AM is, of course, the hoop-dee-doo.  After that's over I will spend the rest of the day housecleaning, etc.  The yard and flowers are in great shape for Susun's return.  The inside of the house?  Not so much.

It's cooling off nicely now that fall is officially arriving. Right now it's 42 degrees outside.  Yesterday was almost brisk.  It feels great.  Gee, that was a short summer and a relatively cool one, too.  Susun wants me to determine how many days we had over 90 degrees.  I'm betting it was less than 15 or 20.

Here's a fun factoid--today marks the 3rd anniversary of our purchase of this house.  It was September 21, 2007, when we closed the deal and received the keys to the place.  A heck of a lot sure has happened here in three short years!

Well, there's not much else to report this morning.  Cheers!  jp
Posted by John Parsons at 7:15 AM