Yesterday was a pretty interesting day which we will discuss after these initial comments.  Sunday evening, I bicycled down to Hilda's Garden to see and experience the three new "Geese Seats" that were installed there last week by the Parks & Recreation workers.  That's what the slide show above is all about.  For those of you who don't have Adobe Flash on their computer(s), you can click here to see the photos one-by-one.  The seats are very beautiful and perfected placed at Hilda's.  I was overwhelmed with happiness to see them there and also to watch how evening strollers interacted with them.  It's obvious those three seats are a "people magnet!"  Seeing the seats in place really brought home the totality of this art bench project and my heart swelled with joy at the realization that this project is really done and it's really awesome.  I'm fond of saying that for this project "the total is greater than the sum of the parts."  Well, last night, I was finally able to actually experience just how powerful that "total" really is.  I sent Carrie a note this morning offering my utmost congratulations and appreciation for everything she's had to do to bring this project from concept to reality.  WAY TO GO, Carrie! 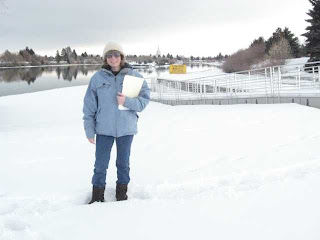 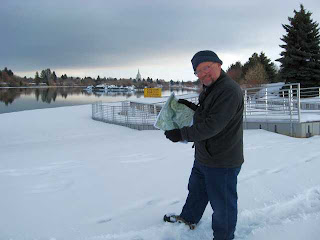 Here are my two favorite photos from this project.  We were both freezing our anatomy off that day and we really had to reach deep for some imagination to visualize where and how these (at that time) nebulous benches could be placed along the Greenbelt.  This was long before the first design submission had been received. This project is a shining testimony to what a positive attitude and a creative spirit are all about.  it speaks volumes about the idea of a single individual's effort making a major long-lasting difference in the quilt of a community's cultural fabric.  In this case, Carrie hit a bases loaded home run ball that will reverberate for years to come.  Thanks, Carrie! 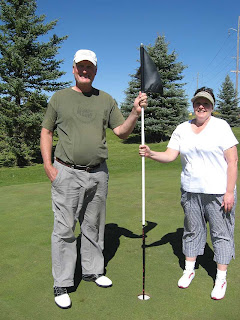 Moving along, let's recap Sunday.  As noted on the Zuki blog, we spent most of the morning dinking around in the garage pondering our next project for "Zen and The Art of Samurai Maintenance."  Meanwhile, Houn Dawg called and promoted the idea of hitting a bucket of balls at the Sand Creek driving range.  I observed that the wind was supposed to come up pretty good so we decided to meet in the late morning.  It was delightful to see Houn Dawg drive up with Suzanne, too.  The three of us enjoyed hacking away at some golf balls and goofing off on the practice putting green.  We then decided to play the short course together and that turned out to be a real hoot.  It's the third time I've played those six short mini-holes.  I'm pretty consistent, shooting a 27, 30 and 29 for those three rounds in the past few weeks.  Houn Dawg hit some consistently great shots and Suzanne and I each had one or two shots to remember, too.  Meanwhile, there was nary a soul on the little course until we were walking away.  That's when a Dad and 3 kids arrived at tee number one.  What a great deal for $3.25!!!!

The golf adventure took 3 hours.  Upon arriving home, I remembered I made a tentative plan to drive down to Fort Hall to try to find an esoteric Zuki part.  So, I hotfooted it outta River City and, by and by, managed to find the seller's place.  His place was buried in a backwoods niche near the Sho-Ban Rez.  Pretty remote.
Anyway, I gave his $25 and drove off with a nice used instrument cluster.  Hopefully, it will work.  The details, of course, will be on the Zuki blog later when the project is complete.

After a few chores around the house and so forth, I sat down to check email shortly before 7 pm and that's when my little bicycle adventure over to Hilda's Garden began.

Today, I think I will call up Dina O. and offer to take her to Hilda's to see the geese before tomorrow's hoop-dee-doo.  Then maybe I will roam around and look at the other benches.  It might be kinda fun to stop in the P&R HQ and tell Dave C. just how happy I am with the benches.  Dave hasn't exactly been 100% into the benches so I enjoy passing along my glee every chance I get.

This is Susun's last day in San Diego.  I'll bet she sure wishes she could stay longer.  That's the beauty of having a non-refundable airline ticket--it makes certain she comes back here and doesn't take up residence in Vista, California!

Well, that's about it for today!  Cheers, jp
Posted by John Parsons at 8:48 AM