Off to a New Place 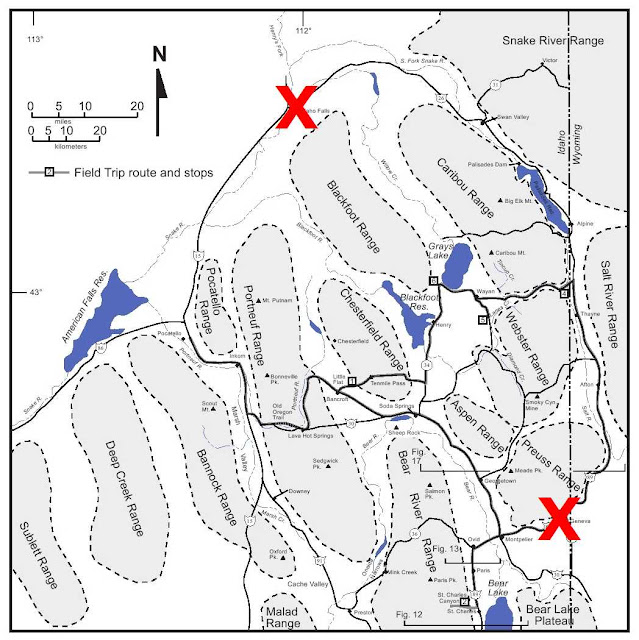 It was a full two weeks ago when we arrived back from our Dubois trip.  That might be the longest we've actually been home since we arrived back from Arizona April 30.  If it's not the longest, it's a tie for the longest.  We left May 14 for our first NVUM gig so the math looks similar.  It's been great to be here as long as we have been.  Looking ahead, we don't see any other summer sojourns as long as this one.  It appears the longest we might be at home from now until fall might be 3 or 4 days in a row.  However, I can't think specifically of any 4 day breaks, most will be three days or less.  Most will be just two days.  So this full two week break has been special.

We always said we wanted to live someplace where we didn't feel we had to flee the heat. Idaho Falls is definitely that place.  We could easily spend the whole summer here and leave hardly at all, it's so fun to live in this city.  Oh, well, I won't digress.

The graphic above came from an Idaho State University geology guide to the area we're visiting this weekend.  The Upper "X" marks Idaho Falls and the "X" in the lower right is our destination.  One route is 149 miles and the other route is 140 miles.  Plus, there's a slower backroad route right through the middle.  We visited that area once in 2004 on a single day drive by.  So, obviously, we don't know diddly about the region.  Heck, we don't even know how to recognize the mountains ranges!  So, it's going to be a nice excursion seeing someplace new.

We're visiting BTB, as he is often known.  I met Bryan at a tiny desert lake outside of Tucson in the first couple of months of 1980. I moved from Indiana to Arizona on Valentine's Day 1979.  Late in '79, I joined the University of Arizona club "Whitewater Explorers" and became an avid kayaker.  Bryan was also a member and we became "fast friends," as they say.  Meeting Bryan resulted in my first Grand Canyon river trip, an event that changed my life.  Meeting Bryan also led to my moving to Flagstaff from Tucson.  Through Bryan, I met many people who have remained Dear Friends for decades.

Bryan's life path took him to Salt Lake City in the early 90's and he had two sons there, Nathan and Sam.  Our life pathways crossed four years ago when Bryan and a group of mutual friends came to Bowery Guard Station for a memorable visit.  Since then we've kept in much better and frequent contact.  We've been talking about going to "Bryan's Idaho Place" for the past four years now so this weekend finally gives us the that opportunity.  It appears that Sam and Nathan have become quite the accomplished kayakers in their own right.  It's going to be a lot of fun to reconnect with that Trio.
I am sure we will have a lot to report upon our return.

We're in no hurry to head out of here in a flurry.  We might not even leave until early afternoon.  It will probably take four hours to get down to Bryan's Place because we will be stopping often along the way.  We're hoping to get in between 5-6 pm.  Weather is progged for the mid-80's with a pretty good chance of afternoon and evening thunderstorms.  We will return here no later than Happy Hour Sunday.

We'll probably post up again before we leave today.  We'll move the Twitter account back up top. I noted yesterday that it's double posting from our cell phone.  I have absolutely NO clue why that is happening.  Simply disregard the double Tweets--there's nothing I can do about it.  Sorry.

Cheers, jp
Posted by John Parsons at 6:15 AM