A Mallet for Nathan 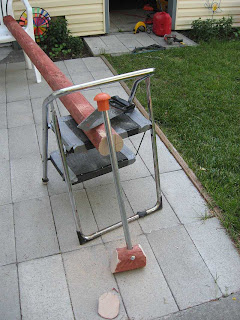 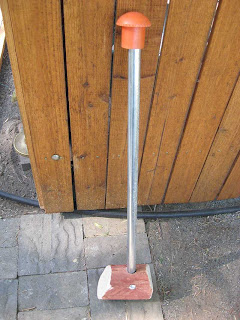 Bryan and his "Boyz" came to visit us at Bowery twice--once in 2006 and again in 2007.  The second time they came to visit was right after Marti B. had visited for the Famous 7&7 Party on 07-07-07.  Marti brought up a $100 croquet set from Boise and Bryan's Boyz were raqtured by croquet in the Bowery lawn.

Bryan and the Boyz came to visit Idaho Falls in July 2008 and Nathan was all excited to play croquet in our backyard.  He even said he would BUY the croquet set for us to play.  I told him the backyard wasn't suitable for croquet. I honestly didn't think it was, because it's all rolling and undulating and so forth.  Well, poor Nathan went into a funk and was really depressed for the rest of his visit.  I felt so bad.

Anyway, this spring, we discovered "Extreme Croquet" and, as you know, we have been having a lot of fun with it.  In fact, we're really no longer interested in playing the game on a flat, manicured lawn.  Well, the first thing I did when I learned of extreme croquet was to leave a voicemail for Bryan to apologize to Nathan for my ignorance back in 2008.

Since we are not on a fast track this morning, I thought I would make a special gift for Nathan to present on this trip--his own custom Extreme Croquet mallet.  You can see it in the photos.  It turned out to be a lot more work that I thought but it's done and it's righteous.  We can hardly wait to give it to him and apologize in person and then proceed to whip his anatomy in extreme croquet!

Note added  at about 1 pm--Been a real leisure rig today.  It's kind of a "dry run" for this coming Thursday, July 15 when we leave after lunch sometime.  Real casual--I like it!  We are turning off the computer now and will switch to Twitter.  Have a great weekend & Cheers!  J&S
Posted by John Parsons at 9:38 AM