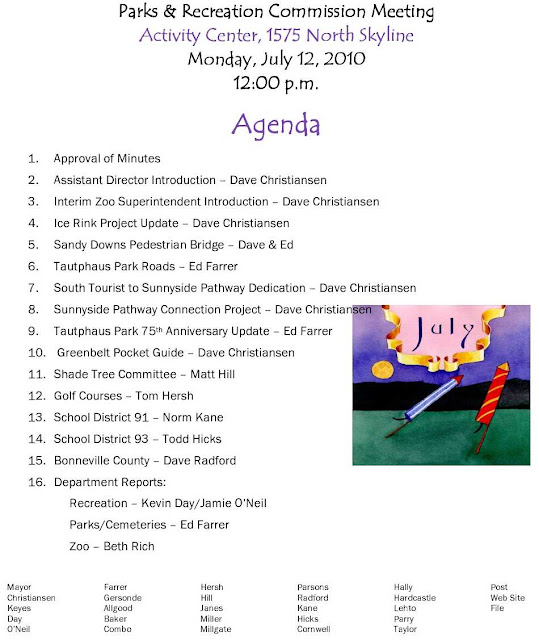 Today might seem like a long way into July to say it is "the first Monday."  Our Parks & Recreation Commission meetings are always scheduled on the first Monday of each month.  If the first Monday is a holiday, then the meeting rolls onto the following Monday.  So, here we are 12 days into July and we're only at the first Monday as far as Parks is concerned.  It's a very busy agenda, as you can see from the document above.  Believe it or not, everything on that agenda will be covered in precisely one hour.  It's uncanny.  The meetings always start at noon sharp and always end at or before 1 pm.  As one who generally abhors meetings of any kind, this is really unusual and delightful.  Also, how many meetings have you ever heard of that take place during a lunch hour?  That's the primary reason I applied for the position way back in late 2008.  A Monday lunch hour once a month?  What's not to like?

I really enjoy being a part of the city's Parks & Recreation Commission.  I look forward to each month's meeting.  However, now that we are retired, it does take some juggling to be here on the appointed day.  That's why we spent only two nights at Bryan's Place this weekend.  We would have probably stayed one more night if today wasn't the first Monday of the month.

It was a great little whirlwind weekend trip.  We left Idaho Falls about 1:30 pm or thereabouts and arrived at Bryan's Place about 5:30 pm.  We spent some real quality time with Bryan, Chris, Nathan and Sam.  We left yesterday about 10 am and arrived home shortly before 2 pm.  We were totally unpacked and had everything organized and put away well before 4 pm. The total round trip mileage was 290.  That's shorter than a round trip to either Salmon (330) or Challis (314).  We took "the scenic route" to Bryan's Place.

The scenic route travels out through the potato and barley fields and then hugs the Snake River's lower canyon along a stretch called The South Fork.  Then the road bisects Swan Valley before curving back and forth around Palisades Reservoir.  You enter Wyoming at Alpine and then head up the Salt River through what's called Star Valley. You now drive on Historic US 89 and pass through all kinds of little dinky towns: Etna, Thayne, Grover, Afton and Smoot, to name a few.  For awhile, you're actually on the famous Lander Cutoff Trail (See description above) before you climb up and over Salt River Pass and drop down into the progressively dryer sides of the hills and mountains.  Salt Creek drains south off this pass and the Bridger National Forest people have put some big bucks into restoring the creek's sinuosity. (Look that one up in your Funk & Wagnall's!)

Finally, US 89 makes a 90 degree turn west just outside of Geneva, Idaho, and within minutes you're staring at a really obscure seemingly locked gate that clearly leads into MOAN Country.  At first, we thought the gate really WAS locked but it turned out to be a fake lock to deter people like us.  Luckily we had printed step-by-step directions on how to proceed.  The next almost 2 miles was really not on a real road.  Heck, it wasn't even what most people would call a "two track."  After a few minutes driving through overgrown cattle pastures and tucking under some dense aspen stands, we realized we had suddenly been transported deep into Official CAT MOAN Country.  We reached one spot where we were absolutely certain there was no road or even a trace of a road as we know it by today's definitions of a "road."  Finally, I discerned a faint trace of wheels which had recently pushed down some of the tall grass.  We gingerly followed the faint track.  The grass got thicker, taller and trickier to navigate.  Imagine grass a foot taller than the big truck's hood!  Imagine grass clumps dense enough to have high-centered the Nissan!  Imagine grass so thick I had to use granny gear to push through it!  Now, you are beginning to understand what we are talking about by thick, tall, tricky grass.  At this point, we were certain we were totally lost in CAT MOAN Country when suddenly we spied Bryan's cabins off yonder tucked into a canyon on the side of a sage-covered shale hill.  WHEW!  As we arrived, we yelled out excitedly, "Ze plane, Ze Plane," and Bryan and his Boyz came out to exchange high fives and hugs.  When you finally make it to Bryan's Place, hugs and high fives seem really appropriate.  His place makes a lot of other MOAN Country seem like it's on an interstate highway!

Bryan's Place was really Rancho Deluxe.  He has it ALL out there and it's amazing that he was somehow able to build such an outstanding facility in CAT MOAN Country.  We marveled all weekend at how the place somehow came into existence in such a remote, inaccessible spot.

There are five buildings.  One is a traditional one room cabin.  The other is a garage with a huge loft on top.  The outbuildings are: generator shed, wood shed and deluxe outhouse.  Bryan built the finest outhouse we've ever seen.  Great design and craftsmanship.  Bryan's water source comes from a well drawn by an old fashioned hand pump.  This time of year there was no need to fire up the generator because it stays light until 10 pm.  We slept in the giant pine loft and set up all the rest of our stuff on the garage floor.  We put together a kitchen outside by the truck's tailgate.

We visited and socialized and even set up our fire chimney.  We cooked meals for everyone, creating two brand new camp recipes in the process.  We played some spirited rounds of truly extreme croquet, enjoyed a nice Saturday hike and two wonderful Happy Hours, too.  Saturday evening, the skies opened up and it poured like crazy on us.  All that water turned the clay-based shale into gooey, sticky gumbo mud.  Our shoes are still outside and weigh at least 5 pounds each.  We will probably need a jackhammer to free the mud from those shoes.  Maybe we will just throw them away.

It's a beautiful spot there at Bryan's Place.  His hospitality and friendship were very much appreciated and enjoyed this weekend.  THANKS, BRYAN!

So, now we're back home already prepping for Thursday's departure to the Island Park caldera and our favorite spot B8 in Riverside Campground along The Henry's Fork.

And today?  It's back to the future and another month's Parks & Recreation Commission meeting.

Have a great day and Many Cheers!  jp
Posted by John Parsons at 7:40 AM