Busy day behind, busy day ahead 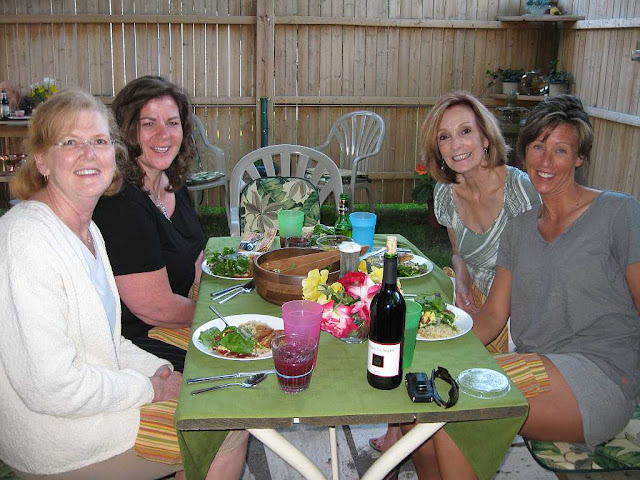 Yesterday was an All About Boat Day for me.  For Susun, it was all about Party Prepping.  We both managed to keep ourselves quite busy all day and didn't retire for the evening until well after 10 pm.
Susun's soiree was successful.  Her girlfriends had a great time.  Susun got some great exercise of her Social Skills.  Susun's quite the Social Butterfly, actually.  So absolutely LOVES staging a party.  She positively beams on the day before a party.  She did some Asian Chicken Thing and a lot of other party food, too.  The table was sit "just so," the girls enjoyed croquet under the Twilight Ski and lots of candlelight chatter as well.  Her friends all arrived at 5:30 pm right to the minute and didn't depart until about 9:30.

Me? I was long gone by 5:30 pm.  Looong gone!  I spent the day messing with the Yellow Submarine, as Debby D, calls it.  About 4 pm, I started putting together everything I needed to "batch it" for a few hours and I split as soon as 5 pm as possible.  Luckily, Susun left the doggie door open for me so I could slip quietly in the front of the house a little after 9 pm without disturbing the sisterhood reverie in the courtyard.

A cooked up an idea to see if an LBR could catch a screen shot of me on the city's Greenbelt webcam.  Nary an LBR  caught on to the idea and the idea flopped.  However, I didn't know it was going to be a flop so I played out my part.  I sent numerous Tweets to the Twitter account and eventually showed up down near the lip of The Falls.  I dutifully paddled back and forth, back and forth numerous times across the river hoping somebody would snag a screen shot.  Nope, nobody did.  At least it was a lot of fun.  I was right at the "No Boating" line on the river and didn't dare go below that line.  It's there for a reason, ya know?  Anyway, the current was very mellow and no danger whatsoever.  However, a lot of tourons thought something must be wrong with me and that I might be swept over The Falls at any minute--they were snapping my photo and occasionally shouting stuff I couldn't hear.  So, I had quite the audience.  It was a good thing to be that far downstream from the boat ramp.  There was a huge wake boarder speedboat making the water nutso farther upstream.  Wake board boats are specifically designed to, well... leave a VERY large wake so the wake boarder can jump the waves.  Trust me, a high dollar wake board boat makes IMPRESSIVE waves!  So, it's a good thing that I hung out in an area no speed boat would dare go.  The waves were all gone by the time the water reached my area.  I certainly did get a great workout in the process.  The little wheeled boat cart worked well.  No way would I have wanted the Nissan anywhere near the crowded boat ramp.  With a few more hours of tinkering, the boat will be just the way I want it.

After leaving the John's Hole Boat ramp, I went over to the city's indoor swimming pool, swam a few laps, got a nice hot shower and returned home.

Well, that's about all to report for yesterday.  We will soon add some photos to this post.  Have another great day & Cheers!  jp
Posted by John Parsons at 7:35 AM