My, how flies time.  Opps, I mean time flies.  Seems only yesterday that we woke up after that long, rainy Memorial Day exit interview at Baumgartner Campground.  We were so happy is was June 1st.  We look forward to June the way a lot of kids look forward to the last day of school.  June has a lot going for it.  We won't go into all the details.  Trouble is, June is now half over.  Too bad June only comes around once a year.  We wish there was some way to double June--maybe make it 60 days instead of 30.  Yeah, I know, that would never fly.  How did the first half of June pass so danged fast?  Well, we'll deal with it and move on.

What did Susun do yesterday?  By now, everyone knows the answer to that question.  Yes, you got it right--she gardened.  She spent the WHOLE day gardening.  Well, not quite.  The other part of the day was spent doing her other favorite thing--processing digital photos into prints at Walgreen's.  She should be a stockholder in that company!  Susun got her garden planted with seeds.  She even made little sticks and labeled each section.  Pretty impressive.  She also made a really nice herb container garden.  Big, lush, potted herbs were half off at Freddie's one day only on Saturday. I bought six real nice BIG herb plants.  Susun really did a number on those herbs.

Me?  Um....only one guess here, folks.  Yeah, you got it right.  Johnny messed around with camping gear.  Duh, that's a no brainer, huh?  The front of the truck bed is packed.  That's the part closest to the cab of the truck.  The new headache rack I installed Friday makes packing so much easier.  Every time I pack the truck, I always tell myself, "Self, this is the BEST packing rig you have EVER done!"  Of course "Self" smiles and nods knowingly and goes "wink, wink."  The process never ends.  Each new way of packing the truck is always the latest, greatest, most bestest.  Maybe the truck is like Rubik's cube where "if every permutation of a 57-millimeter Rubik's Cube were lined up end to end, it would stretch out approximately 261 light years."  (Click here to read the Wiki on Rubik's Cube.)  Maybe that's the way it is with the truck and all the little widgets and gadgets and boxes that fit inside.  Maybe there's so many permutations that I will NEVER, EVER find the perfect rig but will keep searching and trying to the rest of my life!  I must be on permutation 2,045,386 or light year 3 or whatever.  It's a good thing I find this "truck packing game" interesting or else I would have already been driven stark raving mad by the intricate frustrations of squeezing too much camping stuff into a confined space.

At our current rate of rigging, we are on track to leave quite early tomorrow for Heather's Place.  I'm hoping for 8 am but will settle for 9 am.  Susun's lobbying for 10 am so a compromise is in the making.  My main goal for getting out of River City early is so that we can get to The HUB in Challis when the siren goes off.
Challis is a dink town in Custer County which is a perennial contender for MOAN County of The Year.  It's one of those town's where they still sound off the shrieking siren at noon sharp.  Well, The HUB opens at noon sharp, never a nano-second early, mind you!  The Good Ladies of The HUB know when it's noon because of the blare of the shrill siren.  There's ALWAYS people lined up at the front door before noon, standing around like cows waiting to be fed.  When the siren sounds, the door opens like magic and the cows (er, I mean people) stampede into the store and gather up armloads of other people's stuff, usually always at 50 cents a pop.

If you compliment ANYONE in Custer County (except the Stanley area) on their nice jacket or shoes or whatever, they will smile and say, "Got it at The HUB."  And you will pose the classic question: "Fifty cents?" and they will smile smugly and their head bobs like some bobblehead doll in the back window of a four door road roach Buick.

There's all sorts of great stuff awaiting us at The HUB tomorrow and I want to be standing outside when the siren goes off.  I have absolutely no clue what the great stuff may be.  All I know is that it's there, sitting inside The HUB waiting for me and only me to find it and buy it for fifty cents a pop.  Gawd, how we love The HUB--easily the world's greatest thrift store, bar none.

Once the rush of buying great stuff at The HUB is over, we will perhaps make some other social calls in Challis and then head to the BLM East Fork campground where Clark Morley is once again the host.  Clark's wife, Joan passed on last year in Las Vegas.  It's been a real tough time for Clark as Joan was a truly special woman.  Tomorrow will be our first face-to-face visit with Clark since Joan's passing.  We're setting aside a LOT of time to visit with Clark Tuesday.  He's a great guy.  Joan's brother Duane runs the BLM Cottonwood Campground up in Ellis (or downriver as most folks say).  Duane's wife passed on a few years ago and Duane set an example by returning to be a bachelor host of the campground.  Clark is following in Duane's footsteps.  Duane planted a memorial tree for his wife.  It will be interesting to see if Clark has already planted such a tree.  If he hasn't, we can bet we will suggest that we help him do so.  Clark and Joan were our Best Friends during our four summers up on The East Fork.  We lived 30 miles from Clark & Joan's location.  However, it felt like they were our neighbors.  We also obtained ALL of our culinary water from their spigots.  Kinda weird when there's a spring and a huge creek at Bowery Guard Station and you have to get your drinking water 30 miles away!  But 'twas true.

If there is time, we will try to visit Mike in Clayton.  Mike is the ramrod of  CAHA--the Clayton Area Historical Assn. (CAHA is not to be confused with CACA, although some critics of CAHA would beg to differ.)  We're going to be judges for CAHA's Chile Contest July 24.  Mike's even paying our RT gas money!  So, we have to keep in pretty close contact with Mike.  All kidding aside, Mike has sparked a miracle in Clayton and The East Fork Country.  Gee, I could write a book about what he's done there.  Mike is awesome.  And, besides that, Mike has already agreed to run at least one river shuttle for us.  How good is that?  Very good.  Here's a photo of Mike doing what he does best--leading volunteers and working his anatomy off!  (Click here to see the slide show when this photo was taken June 12, 2008.) 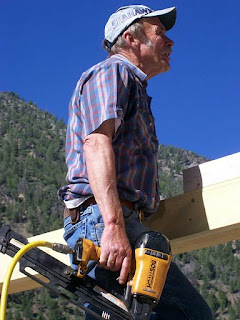 After visiting with Clark and maybe Mike, that's when we head out The East Fork.  It's "down south" but it's also upstream, so that means you're heading UP The East Fork. It confused us for years.  Still does, actually.  Heather's place is about 24 miles up the East Fork.  It's probably about 40 minutes from Highway 75.  We're hoping to pull into "The Dream" (as she calls her Place) in the 5-ish or 6-ish range.  It's spozed to be raining pretty good tomorrow afternoon so that's going to be another barrel of fun setting up camp in a pouring rain.  Gee, will this wet stuff ever end?

What transpires beyond our arrival at "The Dream" we know not.  We do know that whatever transpires there will be interesting, exciting, memorable and downright fun. Heather's Place had a lot of magic in it before she bought it in 2006.  Heather herself amped up the magic exponentially with her own unique gifts.  Heather doesn't called her veterinarian shop "The Magic Shop" for nothing, ya know.

The sun is shining today.  What a novel idea.  Gee, maybe that means we get to mow the grass.  WHOOPPEE!

Have a great day and Cheers!  jp
Posted by John Parsons at 7:26 AM