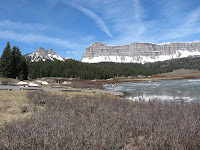 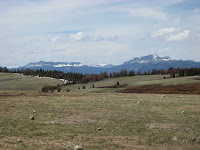 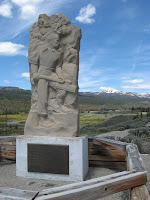 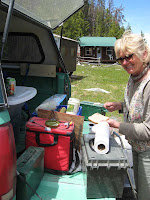 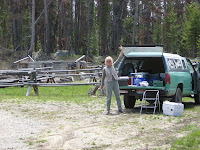 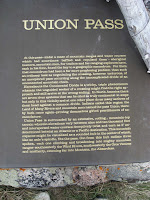 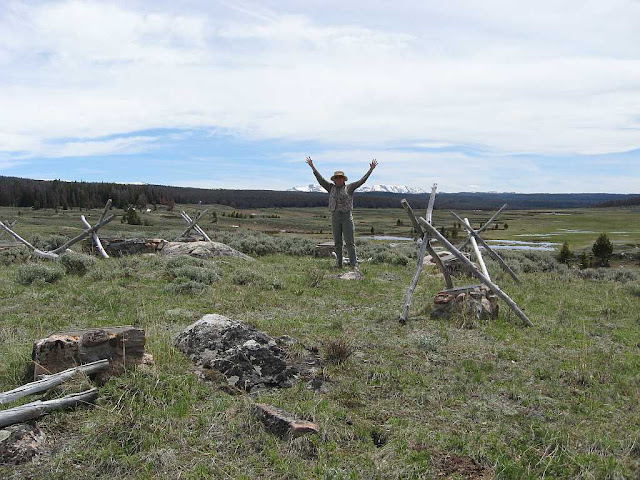 Howdy once again from the Dubois Public Library.  It's a little after 4 pm and Susun is napping in the truck out in the parking lot.  We decided to stay all week here near Dubois, Wyoming.  Why?  Well, for starters we became slackers.  We decided we plotted out much to much of a Type A plan.  We need some R&R after the schedule we've been keeping lately.  Plus, the Falls Campground is wonderful. We love it.  Dubois is charming and there's lots to do here.  Plus, our new slacker schedule this week allows us to sleep late, go to bed late, and be leisurely.  Today, for example, we didn't get around to eating breakfast until almost 9:30 am.  Now that's definitely a slacker schedule!

We left camp about 10:30 and drove up to Brooks Lake.  It's at 9100 feet so it's still mostly frozen over.  Only the near-shore margins are thawed.  Still lot of scattered snowfields dotting the landscape.  Tomorrow, we're going to go back to Brooks and hike to the Jade Lakes.  You can click here for a Google map to see Brooks and the Jades.

After leaving Brooks, we drove down to the Tie Hack Memorial to read the signs.  We visited the memorial late yesterday afternoon but the wind was howling and the storm clouds were threatening.  The memorial was put up in 1946, the year before we were both born.  Consequently, the stone carving is in the classic 1930's WPA style--very heroic.  it's quite good.

We headed downstream on The Wind River once again towards Dubois but felt a strong tug as we approached the Union Pass Road.  So, we turned right and headed out for a 3 hour adventure.  It's really classic "High, Wide & Lonesome" out there in the glacial till and lateral morraines of the Land of Three Rivers.
For some odd reason, there's no marker for the Continental Divide at Union Pass.  Very odd but true.  We actually had to deduce the location by haggling over our maps and dusting off our logic skills.  Meanwhile, we overshot our mark by 10 miles and wound up at a MOAN place called Fish Creek Guard Station.  We actually made it about half way to the Green River Lakes and turned around in the headwaters of the Gros Ventre River.  On the way back, we stopped at the spot we were certain had to be the Divide.  Sure enough, I spotted an overgrown one-foot-wide gravel trail and followed it to the historical marker(s).  What a treat!  The markers contained some of the most outstanding, lyrical, "over the top" narrative writing we've EVER read on any historical markers we've seen ANYWHERE!  Incredible stuff.  So, we soaked up Union Pass and then made our way back down into "The Valley of The Warm Winds."  That's what Dubois actually calls itself on the signs at either end of town.

We're here in the library to check on The Schultz Fire.  LBRs filed four great comments since yesterday and they were a real treat to read.  THANK YOU and keep 'em coming.  LBR Kelli W. sent two great historical photos that I hope to post tomorrow when we are back in town yet again.  Thanks, Kelli, those are cool photos.

Yesterday, we spent a lot of time at the National Big Horn Sheep Interpretive Center.  We both learned more about Bighorn Sheep then we ever knew we might oughta know.  Fabulous place.  We've run out of time today for visiting the Dubois Museum so we've put that on our Thursday agenda after the Jade Lakes hike.  We also spent quite a bit of time at the local Forest Service office.  The front desk guy there was great.  He told us the road from Union Pass down to Pinedale was long and rough--that's pretty much what swayed us to stay here instead of going there.  Meanwhile, we gave us a great tutorial on how to use bear spray and we both learned stuff we never knew.  It was the best advice we've ever received on the use of bear spray.  It also makes us wonder why it hasn't been written up in the user manuals for the spray.  Luckily, there haven't been any bear attacks for the past 2 years here.

After we got back to camp, we walked over to The Falls.  Somehow, we both thought the namesake of the campground would be a wimpy little falls maybe 20-30 feet vertical drop.  HA!  This is a real falls--muy, mega, major falls.  We're guessing the vertical drop is at least 150-200 feet, maybe more.  Vertical distances are so deceptive.  Anyway, the whole Wind River drops over a cliff and it's quite a stirring sight to see.  Hopefully, we can get the east light shining on it tomorrow morning and capture a photo for the blog.

If you click on the second photo from left in the top row, you can see the small red "X" below the breccia cliffs.  That's the approximate location of the Jade Lakes.  Well, have a great evening and a wonderful day tomorrow.  C-YA soon, Happy Hour Beckons!  Cheers, J&S

Opps, almost forgot another photo from today. I titled it "Snow Head." 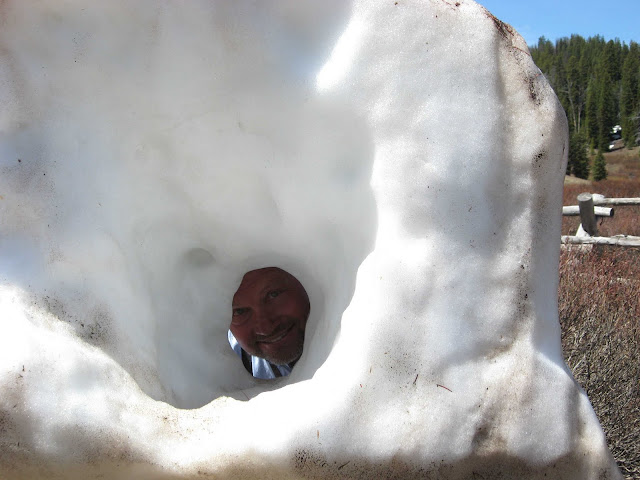 As a lover of all things natural, geologic, geographic, historical and hysterical, I have to say that the words written those signs was just absolutely AWESOME!! A very fitting tribute to a very powerful place. Wow - I am speechless. All I can say is that we will go there one day to see what you saw. Thank you for sharing his with us. WR

I love Continental Divide pictures - one foot in each watershed. I have several, but I must say that the one you found is the most wild, remote, out of the way spot I've ever heard of. And the marker!!! What a piece of exuberent prose!! Did you photograph all of the words?
I will surely try to get there some day.

On some trip I stopped at Fremont Lake - because he camped there. I've been an avid reader of his books in the past.
Thanks for these great blogs. I look forward to them every day.
Dave E.