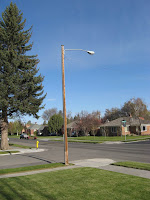 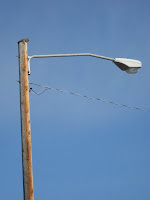 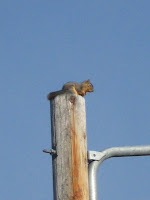 The wildlife in our neighborhood is minimal.  It's all about Squirrels.  Squirrels, squirrels and MORE squirrels.  Some people hate 'em and some people love 'em.  We're not quite Squirrel Lovers.  We're more along the lines of Squirrel Likers.  Susun even saved some baby squirrels last year when they were blown out of their next and fell 35 feet to earth.  Myself?  I think squirrels are hilarious and I really enjoy their antics.  If only all rodents were as much fun as squirrels.

Well, this morning, a squirrel did something I've not noticed since we moved here.  It took time out from its busy Squirrel Schedule to squeeze in a little Squirrel Meditation.  You can click on each of the above 3 photos to see what I mean.  The first photo shows the total isolation of the streetlight pole.  The other two show views of the Squirrel lost in its meditation.

Squirrel Life generally revolves around territory or food or both.  They are generally not known as creatures that take time out for meditative type of activities.  There's absolutely no territory involved in this light post.  There's no food.  There's no females.  There's no NOTHING up there.  It's a one squirrel perch.  The only thing I can think of is that the squirrel has a mutated gene of some sort--it just need a "time out" from chasing other males, protecting its nesting territory and gathering food from the brood.

The little pint-sized rodent has been up on top of the post now for almost 15 minutes.  Go figure.  It'a all pretty squirrely  to me.
Posted by John Parsons at 8:27 AM