We both really love it when we absolutely KNOW we've kept our appointments and show up at the correct time and place to meet someone or do something.

Here's how we kept a great appointment yesterday. First, we prepared to go to Phoenix. Just before we locked the front door, we thought, "Gee, maybe we should call Home Depot near Anthem and see if they still have the freezer." So, we paused to make the call. Some woman answers Extension #303 and says, "Are you the guy who talked to Jerry Saturday?" Um...well, yeah. "Well, Jerry got it all wrong. We don't have a 5 cubic foot freezer and never had. He looked at the wrong freezer."
Um...well, gee...thanks, I stammer and hang up.

Ok, now what? I sat down outside with the local phone book and began calling all of the appliance listings. One guy told me 5 cubic foot freezers were almost impossible to get because "the factory burned down." That's encouraging. Another woman said, "There's no way we could EVER get you a five footer!" Finally, just because I had run out of phone numbers to call, I called Sears in Cottonwood.

SURPRISE! This guy says, "They just lifted the hold on those freezers and we can sell the one we have in stock." WOW--I hot-footed it over there pronto. While we were loading it up, the guy tells a story. He said there was something wrong with previous 5 cubic foot freezers and they had been recalled or forbidden to sell or something like that. Meanwhile, they got the latest, greatest version of the little freezer in last Thursday but were forbidden to sell it. A notice from "corporate" came in late Saturday that is was "OK" to sell the freezer. I just happened to be the lucky guy that called first about the ONLY 5 cubic foot freezer in stock in this part of America.

OK, so now what? Well, I knew I couldn't levitate the freezer out of the truck by myself so I went to Home Depot to buy two eight foot 2x6's. I would make a safe ramp to slide out the freezer. So, I am walking idly down the main aisle and I hear this voice--PARSONS--the voice calls out real loud. SO I whip around and there is Max Castillo--standing right there just like we had an appointment or something. WOW!

As chance would have it, we were standing right next to some great patio furniture, so we sat down and had ourselves a righteous ol' 30-minute meeting just like it had been scripted or something. Max says he was driving along and saw our old green truck so he went into Home Des-pot (as he calls it) looking for me. Meanwhile, I had been thinking about Max all morning and regretting that Monday was his day off.
I really wanted to see and meet with Max--just like we did in the comfortable confines of Home Depot.

Why was meeting with Max so important? Well, we logged over 400 hours volunteering for Max from January-May 2007. Max is Manager of the Arizona State Parks Verde River Greenway. Our volunteer project was to write a canoe paddle guide for a six mile stretch of the river and then to form a "friends" group for the Greenway. (Click here to get the links to see the canoe guide.) 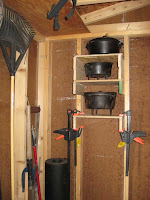 Well, anyway, I have been hoping that I could volunteer again on this trip to do more river guide map making and so forth.  Max had indicated some interest a few weeks back.  Meanwhile Max had a meeting with the Forest Service last week and they pledged their support for an expanded river guide.  The feds also pledged their GIS unit support, too.  This is critical since the GIS unit has been cut from State Parks due to the Arizona budget mess.  So, yes, it was a great meeting and involved my top priority as far as volunteering down here goes.

If Home Depot in Anthem would have had the freezer I would have missed a key appointment here in the Verde Valley.

Funny how things work out. I called Home Depot yesterday, too, only to find my custom blinds ordered 03/02 which I was expecting to arrive by yesterday, were backordered. Oh, they say, no one called you? Um, no. Well, they are scheduled to arrive by the 30th. Too bad I ordered them to arrive in plenty of time prior to guests coming. Gotta love Home Depot.