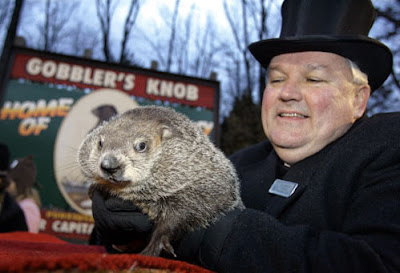 It's true, Susun was born on Ground Hog Day.  Amazing coincidence, eh?  She always enjoys her Birthday and I'm sure that today will be no exception.  Technically, the Yurt Trip was her "birthday present" but I'm sure we will do something special on her birthday.

Meanwhile, Punxsutawney Phil, that "seer of seers" back in Pennsylvania saw this shadow this morning so it's six more week of winter.  When tux-attired and top-hatted members of The Inner Circle of the Punxsutawney Groundhog Club announced Phil's forecast at dawn, I'm sure there were numerous boos.  If we would have been there, we'd cheer lustily as six more weeks of winter means more snow and rain and you all know how we feel about snow and rain.  Yippie, skippie!
I'll always love that banter between the radio disk jockeys in the movie Ground Hog Day.  Here they are:

What happened to Monday?  Got to work at 7:30, a rarity.  Meeting at 8:30 that lasted almost an  hour.  Very little time to mess around and then off to the monthly Parks & Rec. Commission meeting.
I am happy to serve on that group--I learn all sorts of neat inside stuff about the inner workings of city gubmint and stuff most people would find very boring.  To me, it's fascinating, especially when things are going wrong.  It's like watching a raft flip on a river trip, only different.  There's two brou-ha-ha's brewing and I'm in the middle of both of them as I'm part of The Greenbelt Subcommittee.  One involves 20 art benches and the other involves a soap opera scenario about a Greenbelt brochure.  Small minds in small towns are a very intoxicating brew so who knows what stinky stew will simmer forth from this?

Not much going on upon return to the office and I left at 2:30 pm.  The remainder of the daylight was spent bird-dogging various stuff relating to prepping the house for departure.  Chief in those chores was finding the correct city department to begin to cumbersome process to have our water turned off out at the street.  This Old House was built in 1939 and the valve stem has long since been swallowed up by the turf grass between the sidewalk and the street.  Some guy will have to come out this morning and "find" it with a metal detector.  Then they will have to use a backhoe to excavate the frozen tundra.  We're doing all of this weeks in advance to allow for consequences of the inevitable SNAFU.  I can hardly wait to see how this one unfolds.

Susun spent a lot of time in the basement and it's looking a whole lot more organized down there.  It's our "live-in" storage joint.  Need something from our storage unit?  Simply walk downstairs and your storage unit is on display.  That's why we sought a house with an unfinished basement.  Not only can we see all of our plumbing but we could easily convert the basement to one giant storage unit.  Works for us.