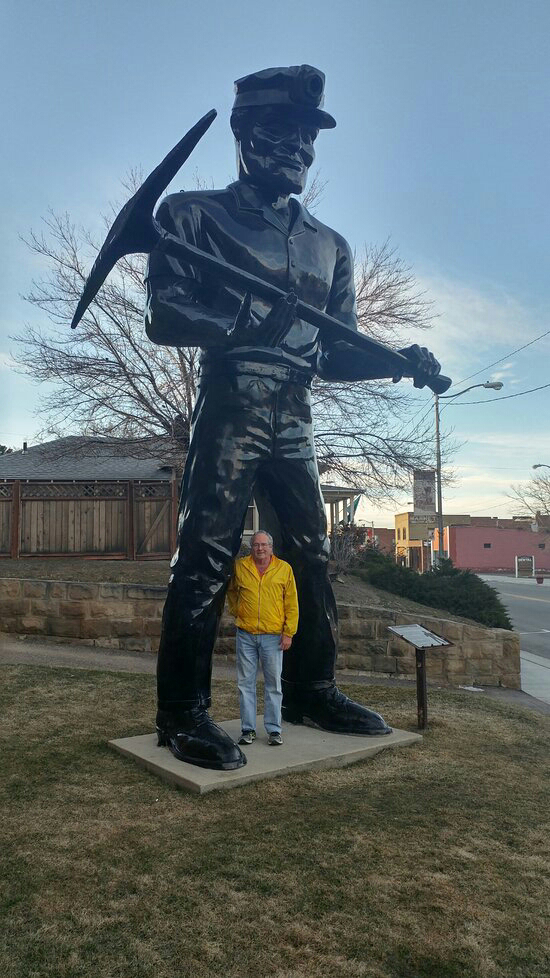 Good Morning from the Heber City Walmart parking lot. 'Twas a fine overnight here at what Bentonville corporate HQ calls a mini-super store.
Walmarts in high traffic or transiet areas long ago banned overnight parking (AKA: camping) but the Walmarts in the hinterlands are still OK with it.  We always go buy stuff in any Wally where we spend the night.  This morning was no exception as we picked the fixin's for a real nice Holiday-style breakfast.
We will probably hang out here until 9 AM.  That's when the adjacent dollar store opens.  I bought a real nice $1 folding phone holder that's perfect to use with this Blue Tooth keyboard.  Susun decided she has to have one, too.
With the dollar stores you better buy it when you see it becuz often they never get that exact same item in ever again. Like, ever.
But that's OK, it's only 30 miles or so to Provo.  We're hoping to be there for an early brunch and munch at Harmons.  Harmons in an SLC area institution started in the pits of the Great Depression in 1932.  That's back when some people were honestly grateful to have two pennies to rub together. Of course, that's when a penny actually bought stuff.
It's always been interesting to me about the number of now successful groceries that started in the Great Depression.  Talk about optimism!  Our Arizona Friends all know Basha's.  Well, they started in the Depression, too.  Ironically, the store chain that recently bought Basha's started back in the early 30's as well.
That much ballyhooed storm is slowly working its way onshore.  The leading edges will produce some precip in this vicinity later today.  But we're OK to lollygag in Heber this morning.  We will be just ahead of any precip as we meander farther south in this here Beehive State. 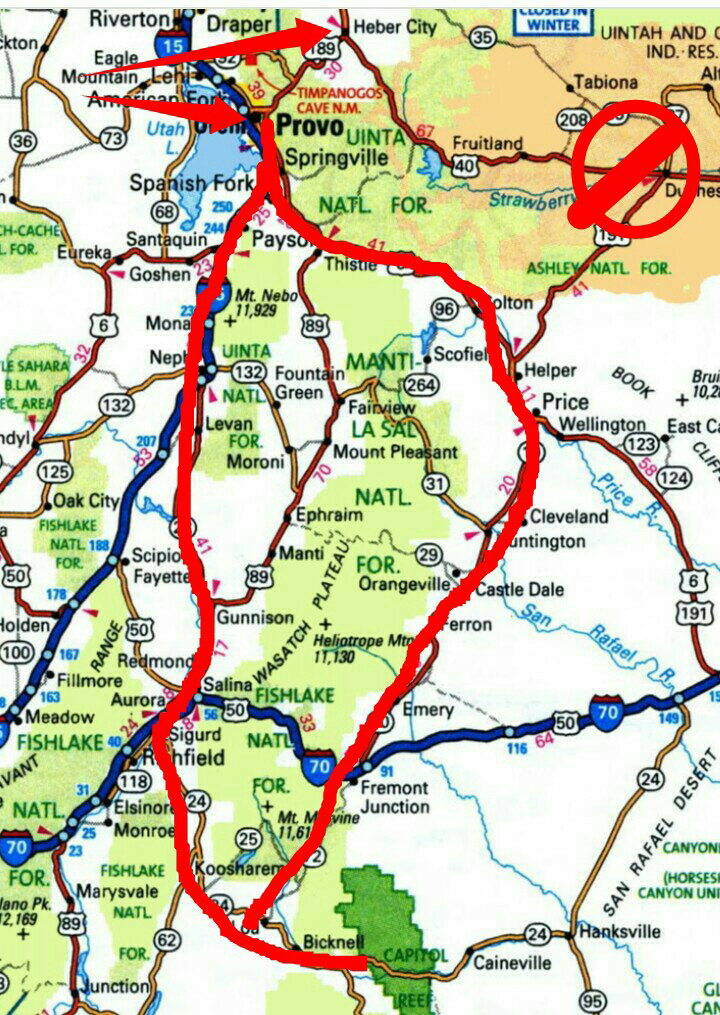 At this point we really don't know which way we're going to meander until we get to munch some brunch at Harmons in Provo.  If we go left we will traipse across Soldier Summit and thence into Helper & Price.  That route takes us through what we call "There'n or Ferron" and onward to Loa and Capitol Reef.
NO WAY we're going through Dechesne.  That hill coming down off that plateau is so steep it's downright SCARY!
If we go right, we're back on I-15 for a few miles to Nephi and thence the normal Levan-Gunnison-Salina-Sigurd route that eventually gets us to Capitol Reef.
The right turn route has the add bonus of getting to visit with Dear Friend Lyman in Sigurd.  Lyman is a Totally First Class Utah History Enthusiast whose excellent work we thoroughly enjoy.
The left turn route has the advantage of spending some Saturday quality time in Helper.  Helper kinda sorta comes alive on Saturdays.  Plus as an added bonus we get to pay our respects to Big Bad John again.  He's The Muffler Man In Black that stands guard out front of the 1930's Civic Center.
The left route has a lot of advantages because there are FAR more places to camp on the east side of the Wasatch Plateau.
There are two significant chunks of Utah topography named "Wasatch."  One is a mountain range and the other is a plateau.  And both of them are huge.  The east side of the Wasatch Plateau is coal country.  Maybe that's why it is named Carbon County. And maybe that's why Big Bad John carries a miner's pick instead of a muffler.
Well, I reckon it's time for breakfast and a yummy one it is today---chicken and gravy served over Stove Top Savory Herb stuffing mix.  Wha-whooo--ROAD FOOD!
Speaking of which, we'll see ya on down The Road.  Thanks for reading! 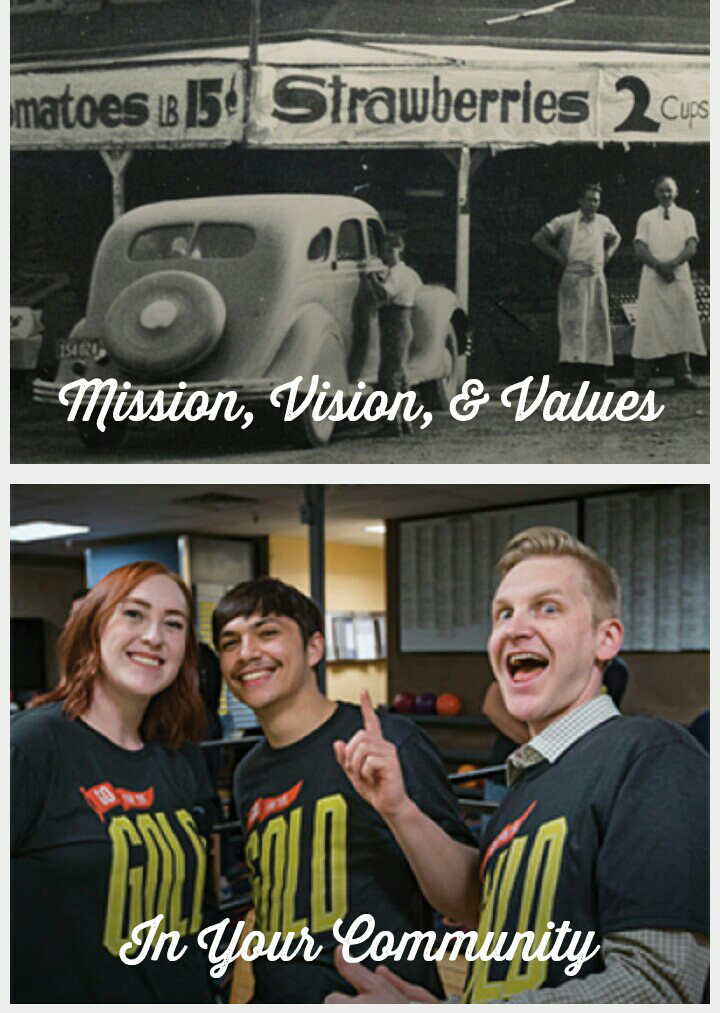 https://www.harmonsgrocery.com/mission/
Posted by John Parsons at 8:02 AM

When driving to Capitol Reef from Idaho I always chose the route through Price.

Mornin' John, We would love to visit with you and Susun and provide you a rest stop in Sigurd, or Plateau,(depending on the time of day) 22 miles further down (up?)this route to CRNP. We are a dual residence couple as well...just not on the scale of you two;-). If you opt for the left hand route we understand, we wish we were with you. This route provides the Helper Mining Museum, the fabulous CEU Museum in Price and mammoth/atlatl recreation, as well as a partial E. P Pectol collection within. Then there is the "do not miss" Museum of the San Rafael with the nearby Pioneer Museum and about 10,000 other opportunities.

If we miss you, perhaps we can visit at CRNP on Sunday? Whatever, have a safe trip and perhaps try to match up the CRNP Dave Rust image location(archived at the CHL) for a repeat photo. 7026107687 works for a text update!

Tough choice, but I like the sound of the eastern route.