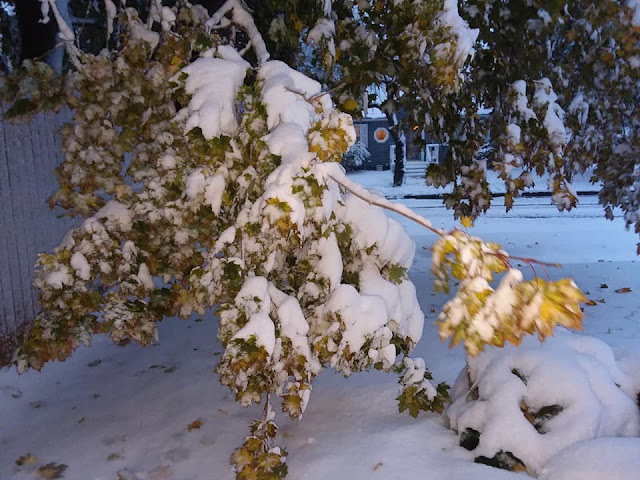 We thought such an event would cause a large loss of limbs from our deciduous trees.  Such was not the case.  Surprisingly, very few leafy trees lost any limbs.  There were exceptions, including one of our adjacent neighbors who lost several LARGE limbs.

One of the weirdest things about this year's seasonal shift is that the leaves just won't let go.  They keep holding on and on and ON!  It's weird because, normally, they have given up their game and totally let go.  But not this year.  NOPE!  Almost ALL of them are hanging on like they might have a New Life...or something.

We have this saying that when The Idaho Leaves Fall, we leave.  Just as when the Arizona Mesquites Leaf, we leave.  Such is Snow Bird Life.

This is the very First Post of our New Posting Life.  We will no longer even THINK about writing a long narrative on Facebook.  Each of the past 15+ times we've attempted to do so, Facebook has automatically deleted our narrative.

Google NEVER does that stuff to us and Google NEVER tells us we violate some sort of policy with our posts.  Therefore, we are no longer writing narratives on Facebook. We will write ONLY on Google Blogger and NOT on Facebook.  Yes, we will still post the usual assortment of snarky comments and memes but never again a narrative.

Been there, done that.

Excellent choice, John. I keep my Facebook stuff very bland for that reason. No such restrictions on the blog, except of course dancing the fine line between various sets of relatives. We have anti- vaxers in the mix with hard core BLM liberals. It's always easy to offend someone. No offense anywhere with leaves and snow. Glad your trees weathered the storm!!