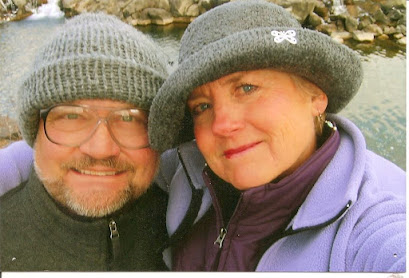 Eight-Eight is our wedding anniversary.  Therein lies a story.

We first got together in September 1987. We then proceeded to live happily ever after.  Well, along about after 27 years together, we up and decided to tie the knot. We both think it was in 2014 but neither of us can remember.  Sounds about right.

But first, we must digress.  We got married the first time without knowing about it. It happened on May 26, 2001, in the Escalante, Utah, Town Plaza.  I introduced Susun as "my wife."  After all, we were in a heavily LDS community that would have frowned an unmarried couple living together at Cowpuncher Guard Station up north of town.

Anyway, the very second I uttered those words, Utah State Law declared us man and wife.  If course, we didn't know it at the time and it was many months before we read the Utah Common Marriage Law.  All you have to do to get married in Utah is pronounce your spouse as your spouse.  POOF!  Yer married!

Well, back a few years ago we decided we oughta get married right and proper, like with a license and stuff.  Anyway, August 8th that year was a Friday and it also happened to be the weekend of The Idaho Falls Roarin' Youth Jam.  Susun had agreed to volunteer for the Habitat For Humanity booth down beside the Snake River on the Greenbelt.  Susun's job was to run the toilet bowl.  Say what?

Seriously.  Kids would come up to the booth and Susun would hand them a ball and they would try to throw it into the toilet bowl.  The title of the toilet bowl gig was "Make a Splash For Habitat."  Of course, most kids love any parody of a toilet bowl so they were lined up anxiously awaiting their turns to make a splash.  Naturally, Susun wore some old clothes that would still look OK after all the toilet stuff went down.

Well, sometime that morning, I got the bright idea to get married.  It wasn't something we had talked about but I figured "eight-eight" sounded pretty good and so why not?  Well, so Susun took a break from her toilet duties and we went across the street to the County Courthouse and bought ourselves an actual marriage license.  It wasn't real expensive--$28 as I recall.

Well, Susun then resumed her splash management duties and eventually came home for a nap.  Meanwhile, I was busily engaged in trying to find some appropriate official to marry us.  It's not as easy as it sounds.  Idaho Falls isn't exactly known as a Marriage Mill.  Well, by and by, I learned that a well known retired Bonneville County Judge performed THREE marriages a week and ONLY on Friday afternoon.  You needed to have $25 CASH--NO checks accepted.

The Clerk's Office told me she had only ONE opening left that day and I better hurry to make an appointment.  Luckily, I was able to do so and then I rushed home. "Wake, up, wake up, Susun, we gotta go get married."  Susun groggily arose from her cozy napping nook and we rushed off to the Courthouse.  After all, it was Friday and time was quickly slipping away.

The Lady Judge escorted us into her old Courtroom, the one where she had presided since like forever before she retired.  And she was a gabby judge.  We got to talking about the Teton Dam Flood in 1976 and she showed us where she put her back to the wall of the Court room and felt the whole Court House vibrate.  Well, Susun was getting pretty impatient with all this gabby flood stuff.

So, the Judge rather begrudgingly stopped talking about the flood and said some words and pronounced us Man and Wife.  And then we rushed off to get the license duly recorded before closing time.  We made it with 5 minutes to spare. That minor detail cost $10 so the total cost of our wedding was $63 and there were a total of three people in attendance. Sorry, no cake.

Anyway, once in awhile, Susun puts on her grubby old clothes she wore that day and I always compliment her on her wedding dress.

We don't have any pictures of our wedding.  It's just a memory that comes around once every year on eight-eight.

I LOVE this story of your wedding day!!!