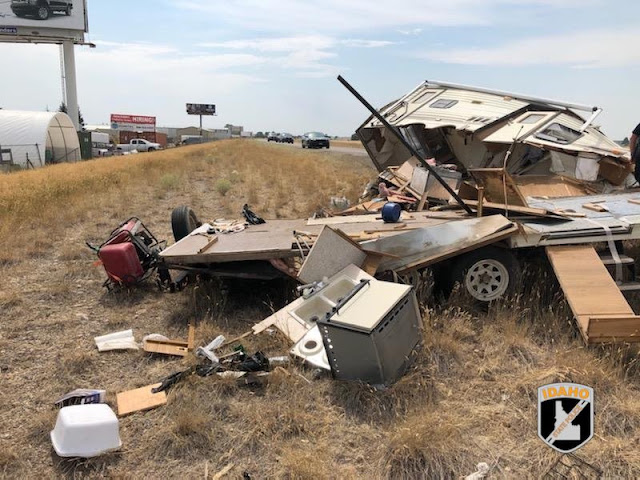 Living near a tourist mecca brings an annual tsunami of travel trailers, motorhomes and tricked out vans to the highways criss-crossing Eastern Idaho.

Every year just like the proverbial clockwork, some of those rigs get in trouble, often BIG trouble!  They crash. They burn.  They roll over and disintegrate. Local media is pretty good about covering these breaking bad episodes.

Another such incident took place in Idaho Falls August 18, 2020.  Idaho State Patrol said, "Appears something may have broke on the trailer."  We've read that snippet fairly often over the years and it haunts us. 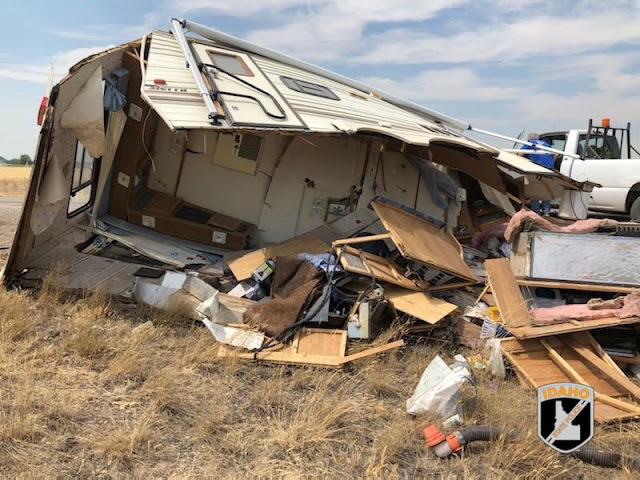 That's why we long, long ago adopted a Life Mantra of "Inspect, Detect, Repair & Replace."  We just assume that our 32-year-old travel trailer is fixin' to fall apart.  So it's up to us to stay ahead of the curve and find the weak spots BEFORE they put us into an ugly situation such as happened yesterday on US 20.

And over the years, we've found all sorts of trouble waiting to happen on our travel trailer.  How 'bout severe stressing cracking on the front of the hitch? It should have cracked off but we caught it before it did. How 'bout amazing stress cracking on the rear bumper?  It should have fallen off but we caught it before it did. How 'bout bad spring shackles?  They were an eyelash from breaking in half but we caught them before they did?   How 'bout a bad, misaligned axle that caused rapid, excessive tire wear and tire overheating that should have caused a sudden blow out?  Luckily, we ID'd and remedied the situation before it caught us by surprise.  How 'bout two safety chains woefully inadequate to hold the trailer in event of a hitch failure?  Luckily, we detected that issue and now have safety chains strong enough to lift the trailer off the ground if necessary.  How 'bout bad wheel bearings?  Oh, yeah, let me tell ya about wheel bearings.  We now service them once a year and lubricate them between each and every trip.  Peace of mind ain't cheap and sometimes it's downright dirty but whatever it takes, we're ALL IN.

How 'bout an inverter that should have caught fire but miraculously didn't?  Yep, replaced that, too.  How 'bout an old refrigerator that could have injured or even killed us with a sudden escape of all its ammonia?  Now we don't even bother with an onboard fridge.  And how 'bout a leaking propane system that could have exploded? Yep, found it early and got 'er fixed.  New trailer brakes?  Got them, too. We carry two spare tires, redundant hitch jacks and much more that I can't even remember right now.

It's all about regular inspection, early detection, rapid repair and ongoing replacement.  There's just no other way to roll.

People towing older trailers are really riverboat gamblers disguised as tourists.  They are routinely endangering themselves and their fellow travelers.  Each year the local media chronicles a litany of "all the usual suspects": Blow tires, burned bearings. Wheels flying off, trailers too big for the tow vehicle causing a rollover; people too cheap to buy anti-sway bars getting swerved into a collision.  Propane tanks catching fire.  You name it, we've read about it....or seen the aftermath first hand.  When a travel trailer rolls over it just doesn't get a few dents and dings.  Nope.  It explodes in a tornado of cheap, thin fake wood and tiny little so-called studs.  Travel trailers are a lot like eggs.  Once you break 'em, there's no way to put 'em back together.  They're G-O-N-E!

That's why our travel trailer life revolves around "Inspect, detect, repair and replace."  Ain't no other way to roll! 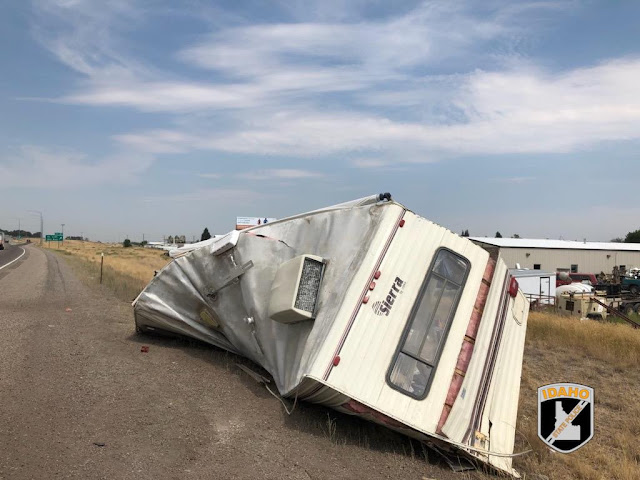